Things That Are Not Finished

New floor, shiny copper pipes, metal in the basement under the new floor, a mudded-in shower pan (at least I think that's what they call it).  I still don't understand why contractors here can't make the bathroom floor transition invisibly into the shower floor using a door with a waterproof sweep like everywhere else in the world, and even a few other parts of this country. I hate the stupid lip but everyone looked at me like I was mental when I described what I wanted, and glazed over as dollar signs floated past their eyeballs. 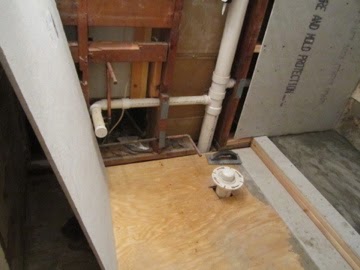 Not only is my bathroom non-functional and my bedroom well-nigh inaccessible, but there's cardboard over much of the floor in my house and boxes of tile and packages of grout and sheets of hardibacker in the dining-room. 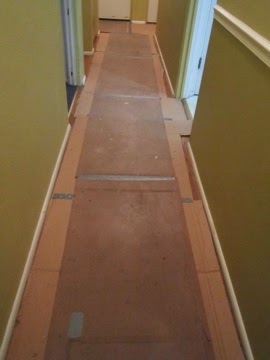 There's plastic down the stairs and into my studio, and plastic drop-cloths all over the back basement. 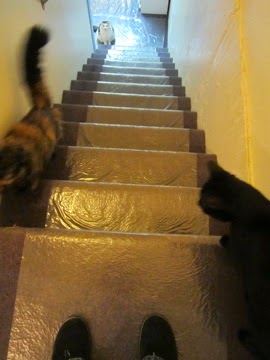 The cats are pretty freaked out.

I blame those facts on my inability to bring most of my weekend projects to fruition. Also my belief, founded on absolutely nothing in my reality, that I can get done more hours' worth of activities than waking hours at my disposal. That's the definition of religion, isn't it? Unshakeable belief in something for which absolutely no solid proof exists. 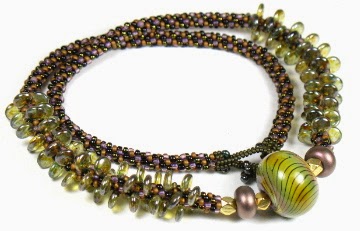 At least I was able to complete the clasp on this kumihimo necklace. 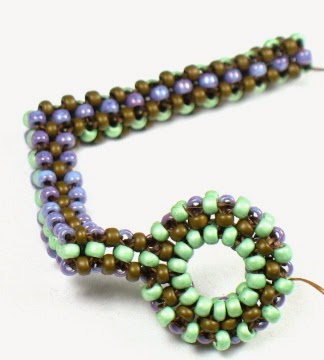 I didn't get this thing finished. (Well I sort of did, but the embellishments I added weren't quite right though the shape absolutely was and I need something to finish it off and move it from Cool Geometrical Shape to Decorative. So, Not Finished).

I didn't get the velveteen coat I was sewing finished.

I didn't get the coordinating skirt finished.

I didn't get my furniture refinishing project finished, though in all fairness that one's a long shot as it's been in progress since the summer. In fairness, it's not progressed much at all, mostly because I ignored it for about four months but still.

It'll be awesome though, and in a couple of days I expect to have two new garments, and a few days after that (she said brightly, ignoring all the setbacks and being very loose about the semantics of the phrase "a few days") I'll have a new bathroom too.
Posted by Charlene at 12/07/2014 11:03:00 PM