You know how sometimes I whinge about the ratio of time spent to results achieved? 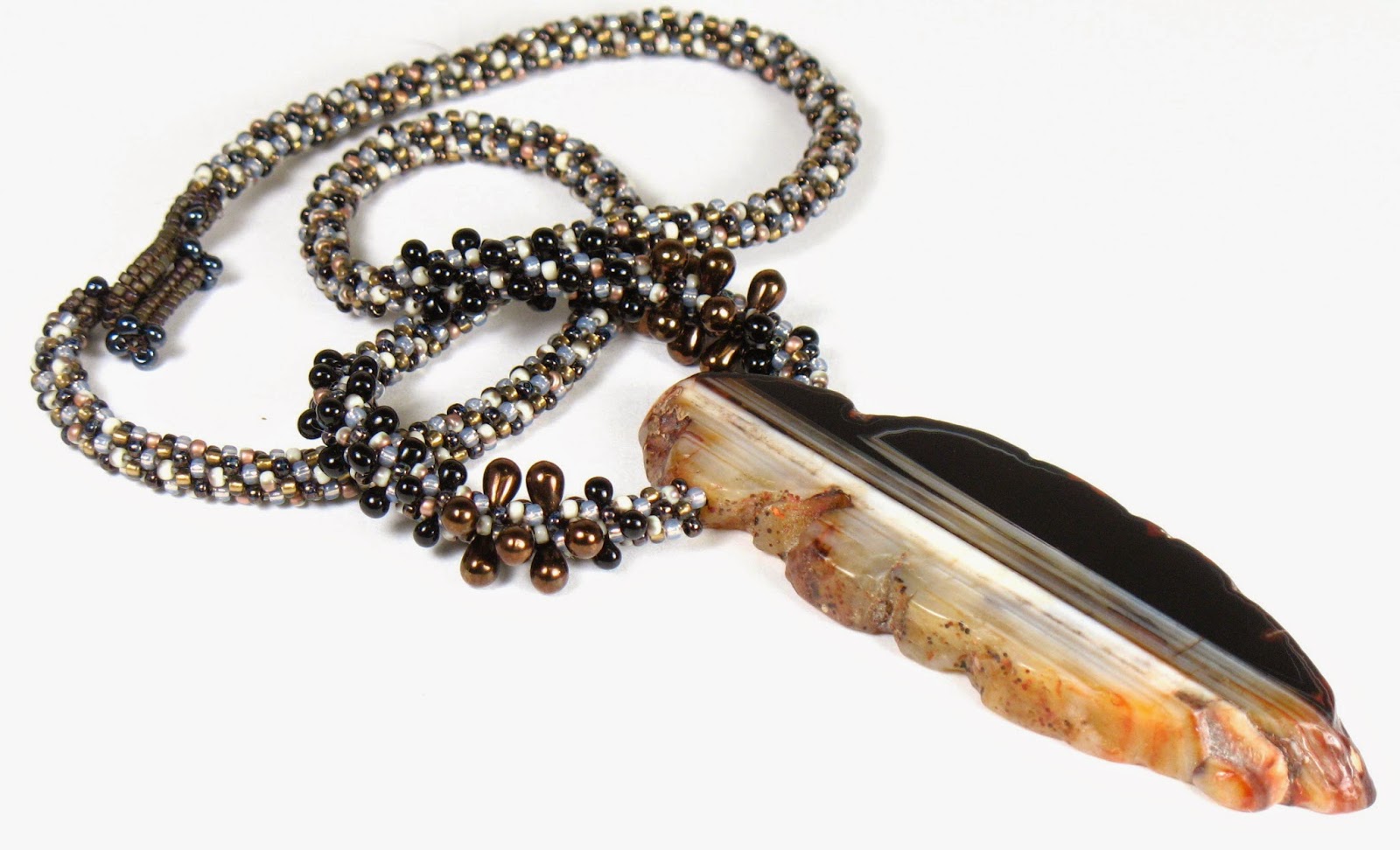 I pretty much love this kumihimo necklace because the focal is such a stunning piece of agate. And huge which doesn't hurt. I've said it before and I'll say it again: size does matter. 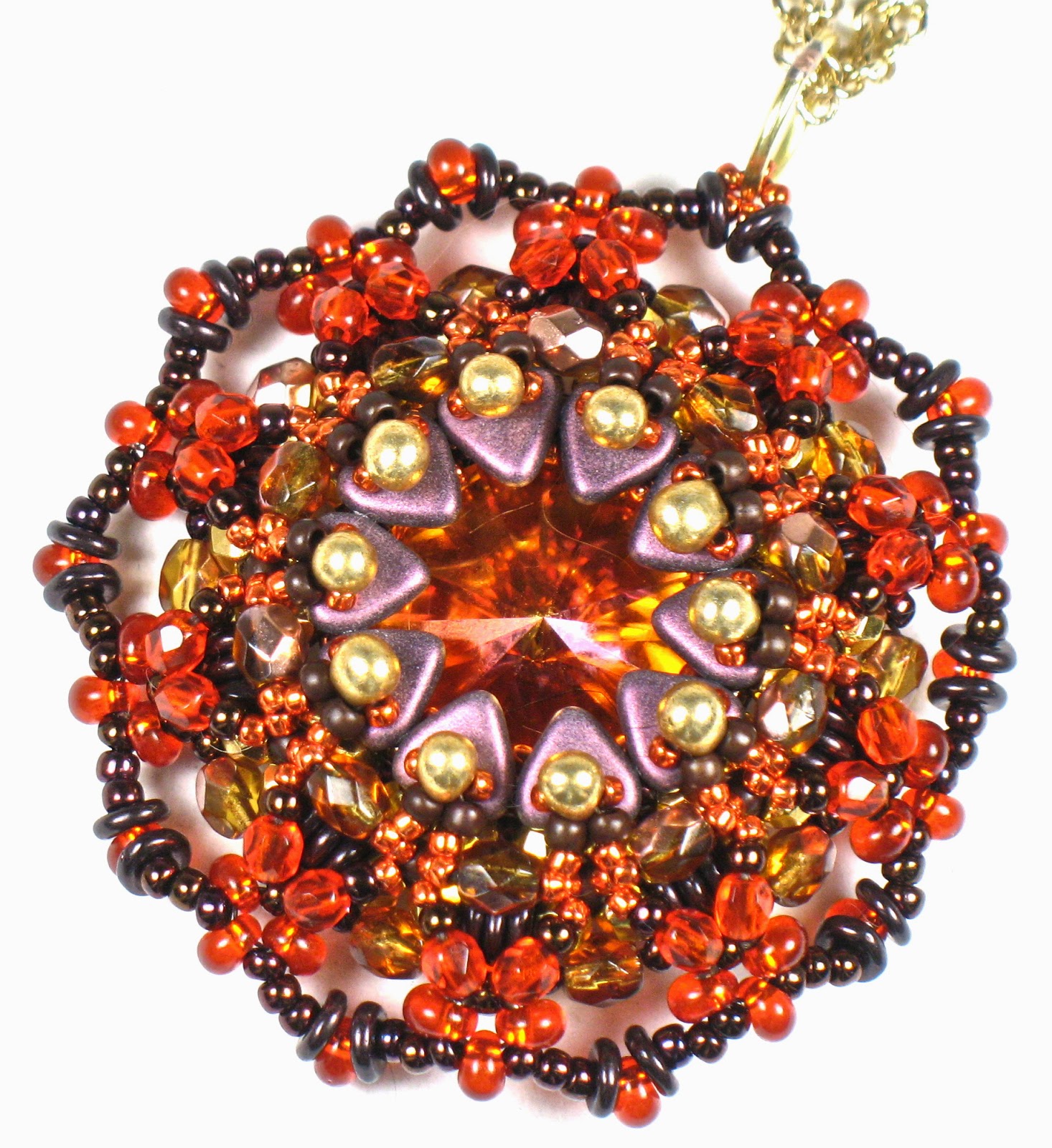 Another class sample. I'm not sure what it is with this design but it turns out I'm incapable of picking a good colour palette for this one. The orange is too bright, the purple is too light and bright and too, well, purple and the gold is too garish and the bronze just hides instead of moderating the whole. 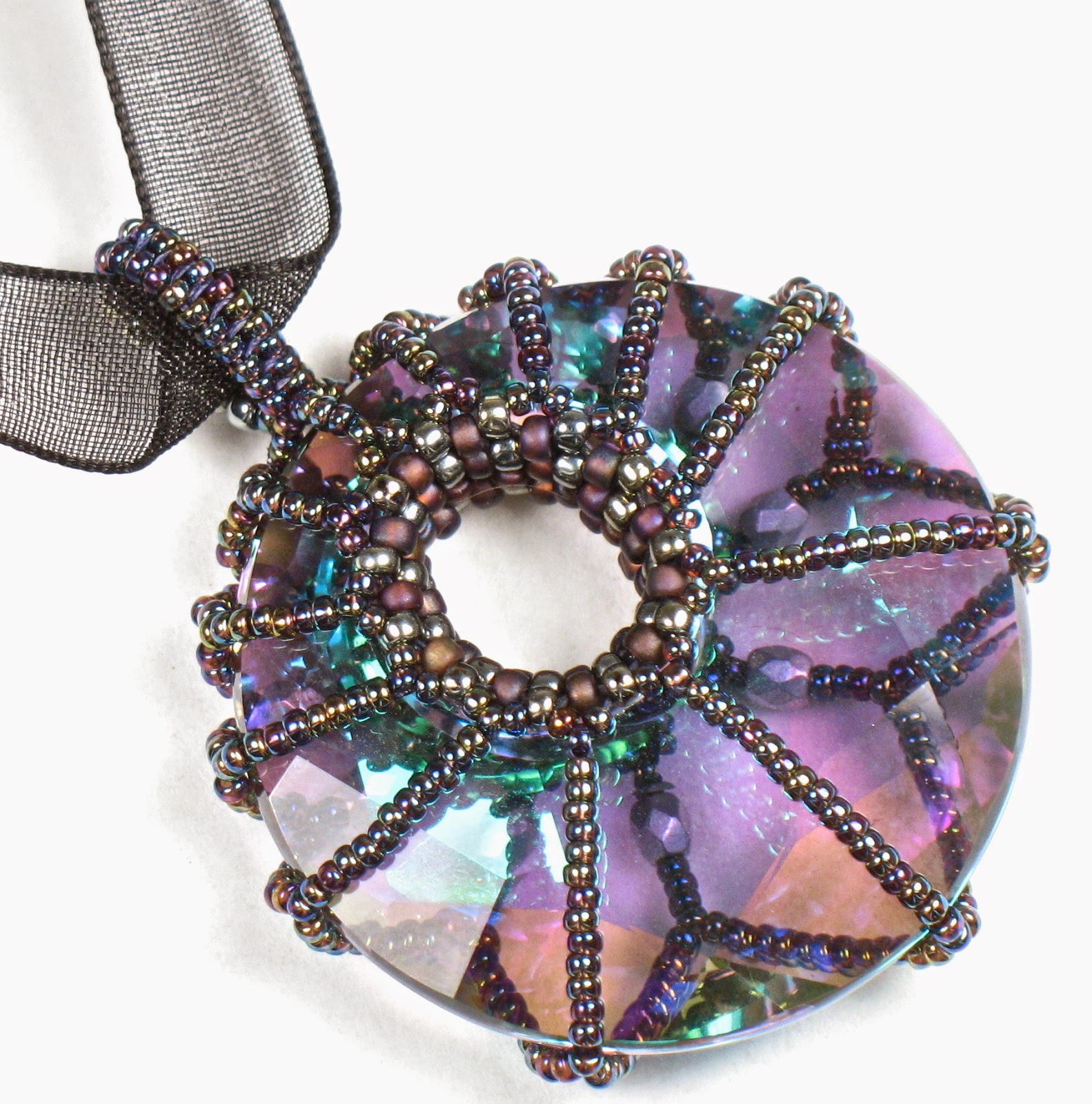 Although this is photographed from the back, you can see the front through it. I know this is a somewhat spare design which I've thought about complicating, but every time I'm about to, I stop. Maybe next time. 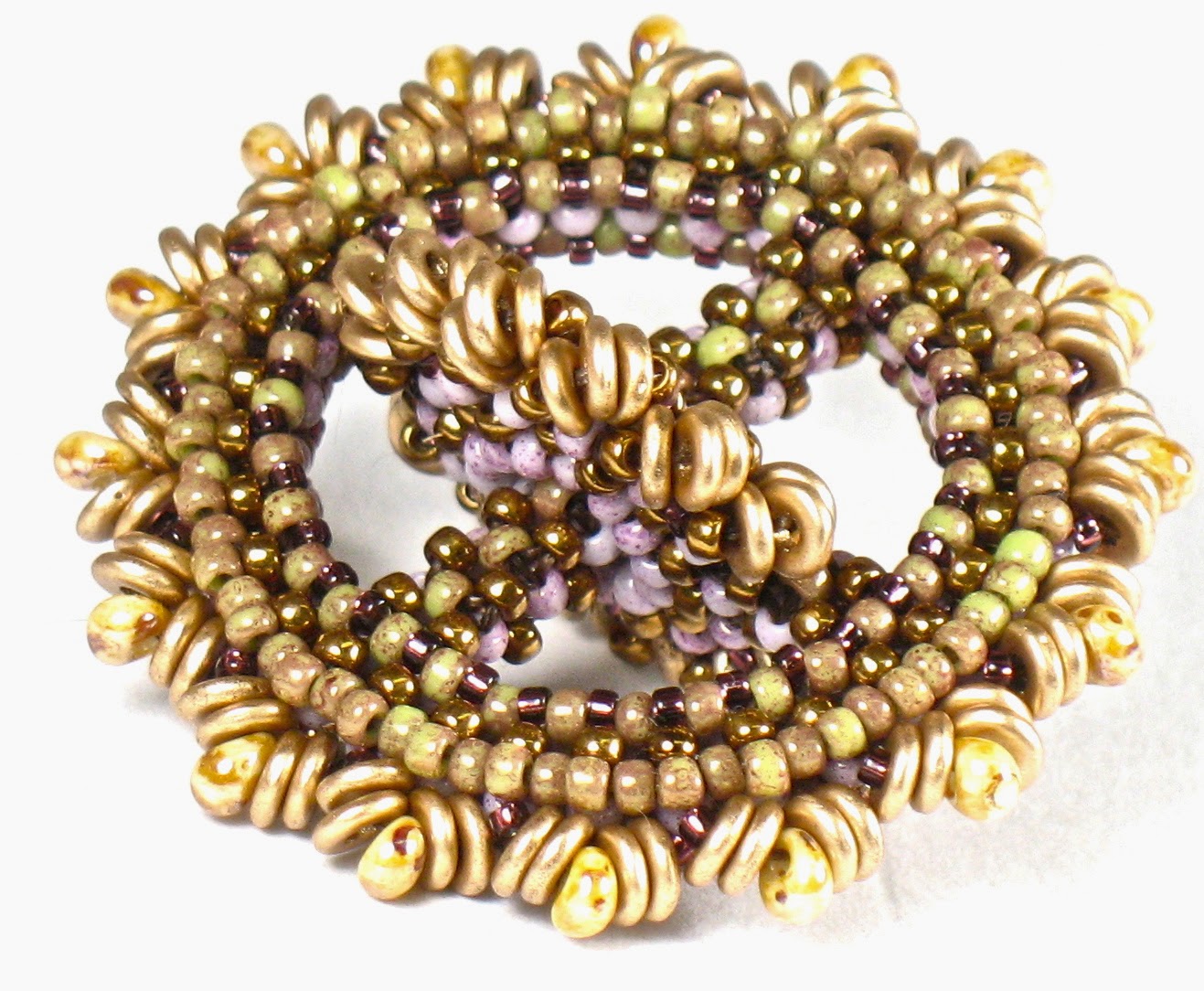 I thought I had this one done, but wanted to stitch another sample to verify the timing, and ended up tweaking it a bit after all. Who knew.

I'm actually pretty satisfied with my output, even if nothing was a brand spanking new design.
Posted by Charlene at 3/29/2015 02:14:00 PM No comments:

So the story is this: back in the early nineties at the time of the dotcom boom, my brother started a company in Australia that did domain name registration.  One of the things he did was to set up lifetime email addresses for all the siblings. I've been using that address ever since and people think I live in Australia because there's a ".au" in it.

He did very well, and was about to sell and make millions when the dotcom bust happened. He managed to stay afloat and rebuild and do very, very well until last year he sold his company for an ungodly amount and no, I was not a shareholder unfortunately.

I continued to use the same email address. It's on every page of all  my instructions, on my business cards, it's the one I give everyone. It's the contact on almost every site on which I'm registered. I use it everywhere.

It stopped working on Saturday.

My brother said he sold that domain with the company and it's GONE.

Since it was never used as an actual email with mailbox but only as a forwarding address to whoever my provider happened to be at the time, I'm not left in the lurch, but I'm in a bit of a pickle.

I may be about one-sixth of the way through the list of sites which have my old email address. It takes a stupid amount of time to update them - some sites are just not very friendly about where they hide your account information.

So many of us feel we live and die by technology and while that's a bit of an exaggeration, a suddenly disappeared email address definitely presents a quality of life issue, so that's where I am.

I had a lovely lazy weekend (sort of, but not exactly). I mean it was nice and all, just that I don't have much to show for it. 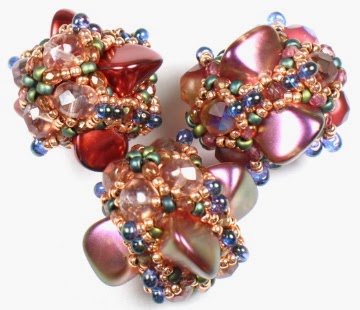 I did make a trio of beaded beads (more to come in the same set of colours) for a class over a week away, and the instructions are done and everything and I'm feeling awfully smug.

I did painting and cleaning and sanding and drilling and clamping but honestly, it's not even slightly entertaining and nothing to look at so I've said all I'm going to for now.
Posted by Charlene at 3/22/2015 10:08:00 PM No comments:

Sometimes It Takes A While

Last time I said anything, I had just completed this little pendant and was feeling pretty pleased with myself. 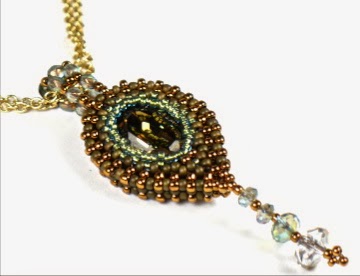 Needless to say (but I'm saying it anyway) that didn't work out either, and I stitched and cut three or four times. Each time I'd be convinced I was almost there - the rivoli was tilted, or the back was bulging - but really each subsequent time, it didn't get better.

So I went back to the same size and shape and thought again about embellishments and once I got that straight, it all worked out much better. 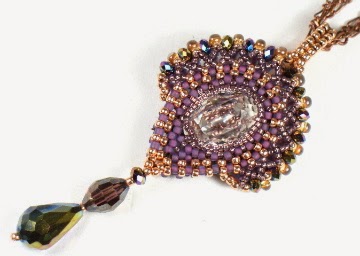 It can as easily be made into a pendant 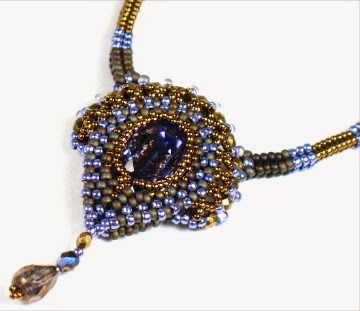 as a necklace, all-in.

Not that all the cutting up and restitching was for nothing because these last two versions are much better around the back and at the point but still. I spent a lot of time with very little to show for it. 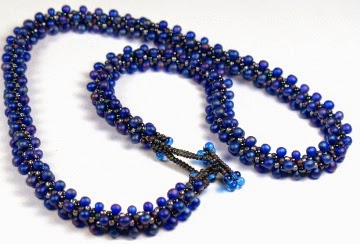 I did get a kumihimo clasp off the queue, but there are two more and one necklace halfway done so I guess I'd better get cracking.
Posted by Charlene at 3/19/2015 10:30:00 PM No comments:

Bead, Bath and Not So Much Beyond

I painted the vanity in the second bathroom a few weeks ago, but just this last week I finally installed the tip-out drawer in front of the sink (which you can see through the gap).

It was utterly unnecessary, but no other sink in my house lends itself to the installation, and I'm so taken with the idea that I just had to.

I can with fair certainty say I'll likely never do it again myself because it was one of the most awkward things I've ever done: you really need to install it from INSIDE the cabinet (or perhaps with the sink removed) because the screws which attach the false drawer front to the hinge have to point towards you, and I don't know about you, but I much prefer to be inserting screws that point away from you in large point because of the way my upper limbs are jointed. But I don't know, you could be different. 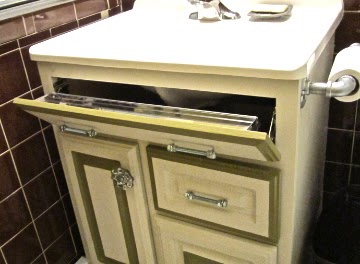 I think I've had a vague idea for a similar pendant for years, but never quite managed to make it crystallise (sorry, pun not intended, but actually I'm not sorry) until now. I once bought a kilo of mosaic turquoise go-go beads (an oval pendant with the hole to one end like this one) because of a kit I was absolutely going to make but which never worked out. 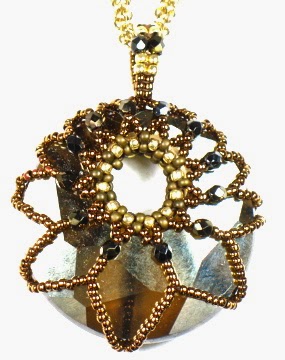 It took around half-a-dozen attempts to get the bead counts of the zig-zag bits correct though which was especially annoying as I only have this one pendant so it wasn't as though I could fail and look at what I did wrong as I worked on the next one.

The picture's a little awful though.

And speaking of things working out. 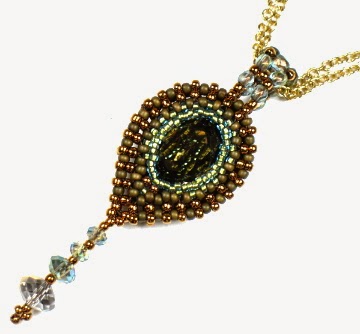 I've once only managed to bezel one of these oval rivolis without immediately cutting it up, and while I guess this is pretty plain (so far, this is only version 1.0), I like the way the small beads frame and mirror the oval shape of the rivoli.

Like I always say, there's nothing like an upcoming deadline to get those creative juices flowing, even though it's been moved out a couple of weeks. That just means I'll be able to work on subsequent - and preferably better - versions of these last two pendants.

I guess I was tired on Monday and I know I was in a hurry because the bracelet I made for class and showed here last time contained an egregiously-wrapped thread that threw a bead off to the side and left some thread highly visible and distorted the whole and let me tell you, people were Shocked. Horrified. 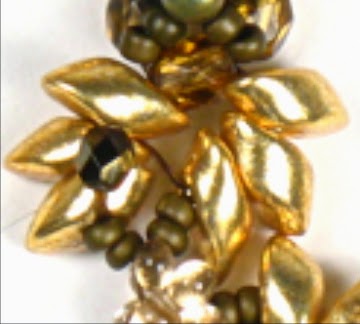 Not to worry, I cut out the offending portion and fixed it up better than new (because new was kinda sorta not so lovely after all). 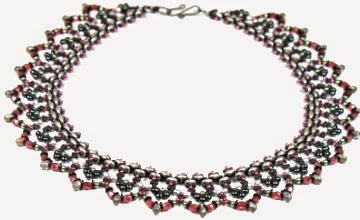 And I finished this sweet little collar with the bead refill. I think there might be a version of this that could be finagled into a dramatic wide cuff. I might have to try sometime.
Posted by Charlene at 3/06/2015 09:41:00 PM No comments:

(There's no marginally interesting title for this post that I can come up with).

I really should make more of these because they work up so quickly and I don't think I've managed to find anything else to do with these long magatamas that didn't bring on the urge to take scissors to the project. 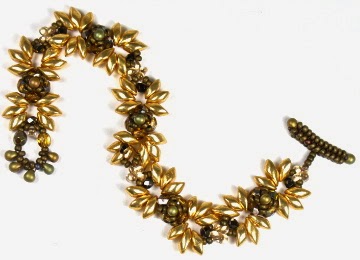 Plus my favourite: a good selection of different bead shapes and sizes for textural richness. I hope tomorrow's students enjoy it too! 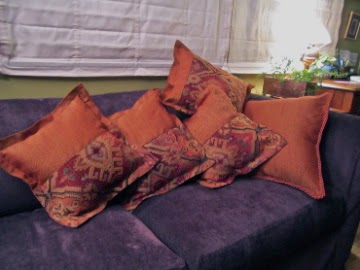 And then yesterday I made a slew of pillows - not all for the one sofa! - because the pillows I had suddenly started screaming "Eighties! Nineties if you squint!" and they just had to go. I don't love and adore this fabric, but it's not as objectionable and it was in the stash, so all it cost me was time.