I'm enjoying this one. 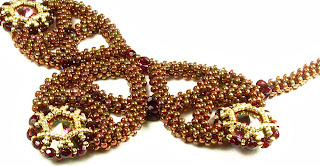 It's heavy on the stitching: each of the three motifs takes me a couple of hours which meant that many hours were invested before I could join the three of them and see if the necklace would actually work.

Not Quite a Thousand Words

It's not that I haven't been doing anything the last few weeks, it's just that pictures of painting the ceiling just don't quite paint those thousand words and really, picture of half-painted walls might be vaguely interesting, but certainly pictures of unpainted, partially-painted or fully painted white ceilings are just a waste of pixels. 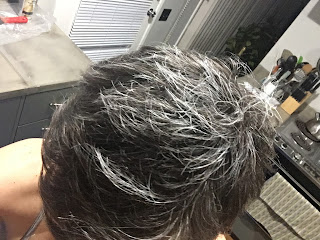 My hair took part in the ceiling-painting process. 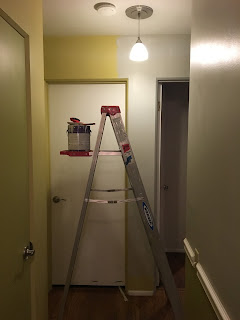 See? Only vaguely interesting. Serves only to point out the previous overabundance of colour from previous decades. 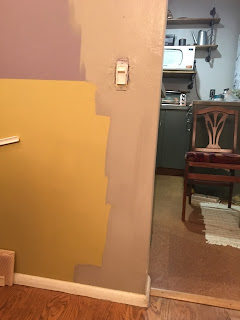 I'm much happier with three shades of grey. 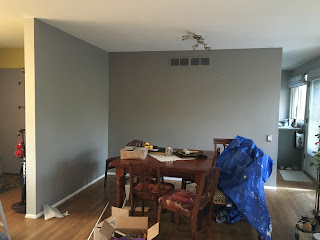 So yeah, I've been neglecting everything at the expense of painting. 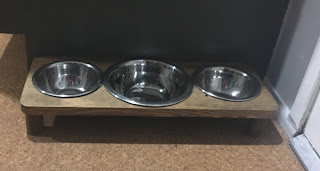 This feeding station for the cats is about as far as my rudimentary woodworking skills (and I use that word advisedly) will take me. Honestly? The legs aren't quite even and it wobbles a bit.

The kitchen? It's as done as it's going to be for at least the next few months. There are a couple of touch-ups I should do, a few woodworking projects which I assume will not be as awesome as in my mind's eye and yet. I have a smouldering desire to make beautiful and useful things out of wood. 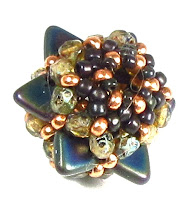 I've made a couple of beading samples. 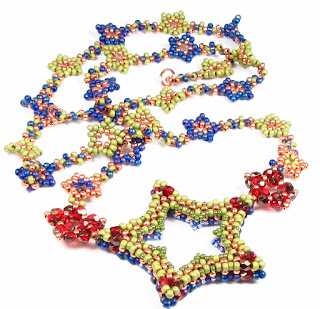 My current trivial (because in the grand scheme of things anything not Life-or-Death is trivial) sadness is the state of my knitting. 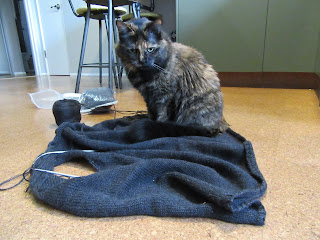 Beautiful, right? (Ignore her; she has no clue and besides, she has Resting Bitchface). Cashmere-silk in a slightly relaxed gauge for drape and softness. Yummy.

Except bad. That's the thing when just knitting an idea: without trying it out, you can't always tell if it'll work, which is to say that it may not work on your body. And it doesn't.

I've been spending all this time knitting a scaffolding to showcase the gorgeous (and expensive) skein of hand-dyed merino-possum-silk I bought in New Zealand and it is frankly deficient.

My previous self who would happily binge-knit a weekend away would barely have blinked and sighed before ripping it all out, but this me, the one that really shouldn't knit more than an hour a day and preferably not every day to avoid hand pain is quite a bit less sanguine about the prospect of starting over.
Posted by Charlene at 3/13/2016 11:48:00 AM No comments:

Debbie and I met when we were ten years old, at some puppet show (or more properly perhaps, a marionette show). Snow White. Sleeping Beauty. Something or another.

We instantly hit it off as ten-year-olds will. We invented super-heroines and designed their costumes. We were into some dolls she'd been given by American relatives. We probably created very detailed inner lives for them. I don't really remember much besides the mental vignettes of us as children, playing, absorbed, intent.

Six months later, her family moved to Israel. I was devastated, but we decided to write letters. And we did, letters about kid stuff, then letters about boys and after four years her family came back to Cape Town and it turned out that I was the only one of her friends who hadn't dropped off the radar. 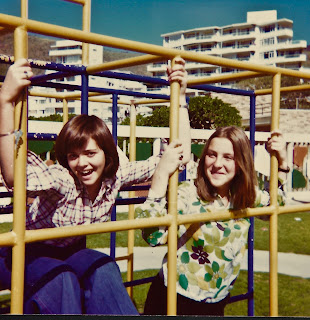 We picked up our friendship again, sort of, but things were different. 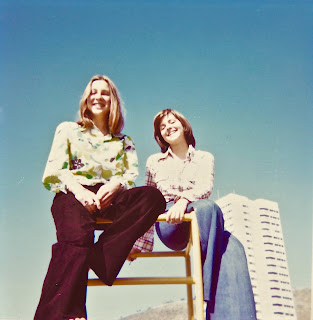 We were still friends, but that childhood intensity had dissipated. We each had other friends, we were at different schools, but it never dropped away. 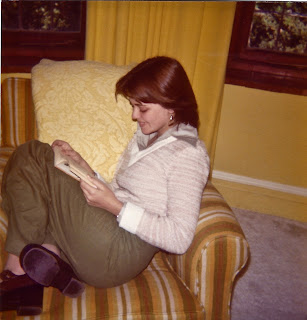 We did the things that people do in life: we got degrees, we had romantic relationships, we travelled, we married, we went to live on different continents. 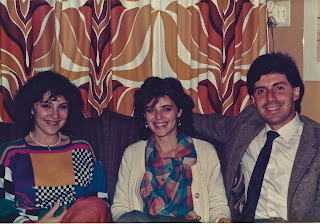 I came to North America and she went to Australia.  That was that, right?

Then one by one, my brothers moved to Australia and I started visiting for weddings and wonderfully, Debbie and I connected again.

Then my parents moved to Australia and so my kids and I continued to visit, and each time, Debbie and I would get together.

There's something about being with friends that you've known most of your life, even if your lives have separated more than remaining intimate - there's still that commonality of shared lives and life experiences that binds you together in ways that no new friendship can ever duplicate. The time apart is irrelevant except in that there's some catching up to do, and even if you've drifted away in some aspects of your lives there's still a history that bridges all gaps.

Two and a half years ago Debbie was diagnosed with breast cancer with bone metastases. She was upbeat, even though there's no cure. People can live for fifteen years with bone cancer she told me. Hers responded well to hormone treatment and when I saw her a few months later she was well and positive and calm and philosophical.

She sent out email updates from time to time; I assume to people like me, geographically or emotionally distant, not in that tight circle of her daily life. I was so grateful to not have to nag for details because they seemed to arrive just when I was almost at the point of asking. She did say it was difficult to field endless multiple phonecalls about her progress so I suppose the emails were self-protective, but still.

I was in Australia for barely a week this past December but we managed to get together a couple of times.

She was thin, a bit drawn and tired easily. The cancer had spread to her liver. Even though she was still undergoing treatments I think the notion of her death had become more real to her, something close enough to make out in the distance but not immediate. She did say she wasn't yet ready to let go though, but I think she was imagining a time when she'd have to.

When we said goodbye after the second visit I told her to be there when next I visited Australia and she gave a small smile and said "We'll see". As I stepped out of her car and closed the door I think I knew then that I'd never see her again. It took a while for me to pull myself together after that.

She said she had accepted it. She said she was at peace with it. I hope those last ten days were quiet, calm, pain-free and peaceful but if I was Queen of the World that cancer would have hop-skip-jumped right past her without even registering.
Posted by Charlene at 3/11/2016 06:22:00 PM No comments: