So I'd made a pendant using 12mm rivolis and I really wanted to make a coordinating miniature beaded bead using small chatons in the same way, but with smaller beads and it really hasn't been working well. I'd just been making ugliness and awkwardness.

So I wondered how it would be to use both the big and the small crystals and make something that wasn't three-dimensional and it turned out much better than my misguided previous attempts. 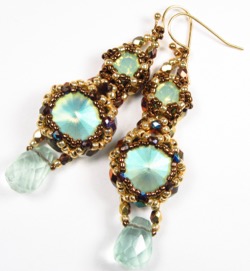 They're a hair over two inches long, not counting the ear wire. 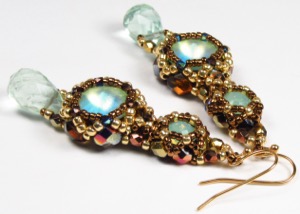 So tomorrow I'm teaching a fun little pendant that uses a pretty simple technique to capture the rivolis and I was certain I could scale it down for chatons to make cute little miniatures for earrings. 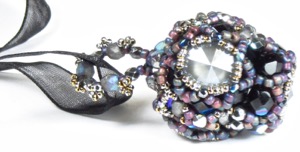 Turns out not quite. Similar, but only some of the beads are scalable and while I was able to use almost the same capture technique, it was not quite the same, enough different that the ends would have been wobbly and so it wouldn't work and (relatively) undaunted I've been trying to get something usable.

I cut up the first iteration. 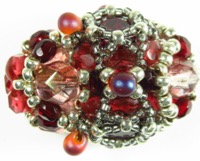 The second has two different ends, neither of which I like. 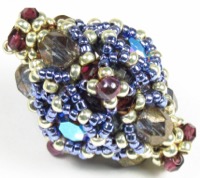 The ends on the third are ok enough that they're the same, but I'm not quite there yet.

But the pendant itself? Not missing with it - it's come as far as I care to take it.

Oh and in case you were wondering, they're a bit of an odd couple: while they share some elements, their proportions and other elements are different enough that they would be uncomfortable bedfellows.

Let's just gloss over the fact that we haven't spoken since I was in Scotland in March because life, excuses, apologies, forgiveness, done.

But look at this:

I have to say, I'm quite pleased and more than somewhat surprised at how easily it came together.

There was almost no thought or planning put into this. I was doing my usual Saturday bead surf and saw a beaded key which wasn't actually all that attractive so I typed "skeleton key" into my search engine, was pleasantly surprised at how pretty and ornate some of these are and how much some of the shapes reminded me of a sceptre, so I typed "sceptre" and decided to make a key with a crown on top and got going.

Usually when I make a new something this elaborate I end up with piles and piles of short bits of wiggly thread from all the cutting, but this time I cut after literally only about twenty beads - so really not much, no more than a few minutes of beading.

If you know cubic right angle weave it's very straightforward, much more so than some things I may have made that may have caused people to question my sanity, not that I know what their problem is.