Things are as they are. Deal. 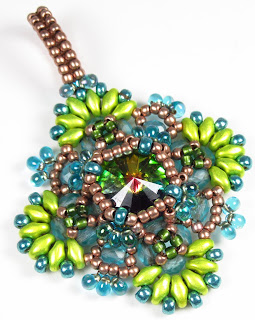 There were class samples made. 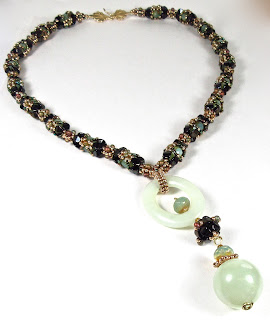 This one with the jade used some very, um, mature items from my stash. I mean I buy beads for no reason other than because they're pretty but sometimes I find myself with various items which seem to insist on being together so I bag them up and then more often than not I have a Need and the group gets split up - but sometimes I find the perfect project and sometimes it apparently can take ten or more years. 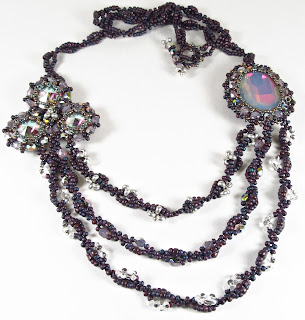 A friend had access to a lovely old house in Hermann last month so we had a beading weekend where I taught the above necklace. It's related to one of my Bead & Button classes but is dissimilar enough that there are no contractual violations or anything like that. (I'm not supposed to teach the same class within a certain time or distance from Milwaukee in June. So I don't). 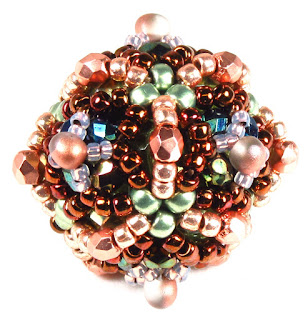 Another class sample for a class which ended up having no students. Too bad; I think they'd have enjoyed this one. 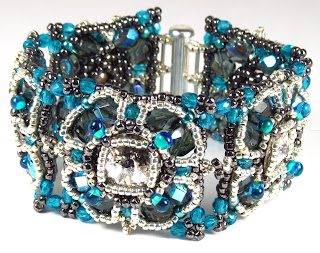 The cuff bracelet is sort of a class sample; the class is actually for a pendant but I've been wanting to combine multiples of the motif and thought I should probably try it before asserting that yes, you can make a gorgeous cuff by joining them together. 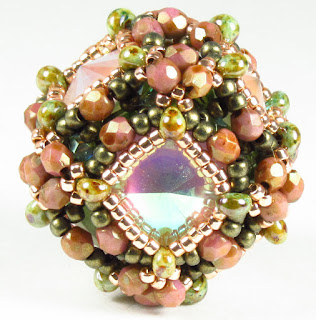 This is somewhere between a class sample and kit colour-way. I'd used these beads and rivolis in a different project for a different class that needed kits but somehow never got completed so fortuitously I have most of the supplies for a whole other kit.

I've been knitting quite a bit but as usual have no pictures. There's been ripping out too; one project was too small to be accurately described as "slouchy" so was partially ripped and is now complete and is officially clothing (I've worn it a couple of times).

The other had bleeding issues and (a) it wasn't all that attractive and (b) I got tired of blue hands so the whole thing is undone and the yarn is thoroughly washed and re-overdyed.

I'd be annoyed at myself if by my sloppy dye job I ended up with yarn or roving that bled all over me and ruined the other colours in the project but I'm pretty ticked off that someone had the gall to sell such a crappy dye job. If only I could remember the vendor I'd never buy from them again.

Actually I probably in fact will never buy from them again because I have so much yarn and spinning fiber that I'm going to be hard-pressed to use up even a respectable fraction of it even if I won the lottery, retired tomorrow and became a full-time fiber recluse, forgoing all else for knitting and spinning. Which in the grand scheme of things is unlikely for so very many reasons, chief among them that I've never in my life bought a lottery ticket.

Besides, that sounds pretty boring.

If I retired tomorrow on lottery winnings I'd travel a lot and live in New York and San Francisco and London and Sydney and have a cottage on a beach somewhere or perhaps a boat.