I was two of three patterns on the Craftsy newsletter today. That was slightly thrilling. 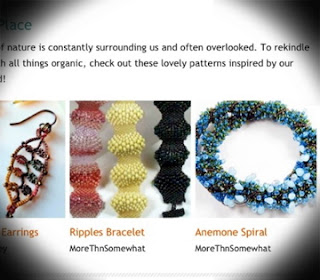 I finally finished the sweater which was travel knitting for my trip in May. So deluded was I that I brought another project just in case. In all fairness, it's knitted on US size 2 needles, which many people use for socks. There were lots of stitches. 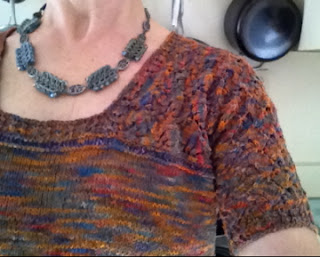 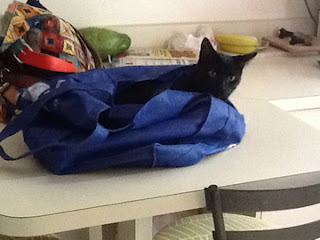 Unless it's something huge, every time I think I've come up with a new idea, I try to rework it with beads that I know I can get again (at my local bead store usually), or with beads that might be better or more common or more typically sized - some finishes, especially on seed beads, can affect their size. For example, Toho's permanent finish beads (both galvanized as well as gilt-lined) tend to be slightly larger with slightly smaller holes. Sometimes it doesn't make that much difference, but sometimes it really does.

The focal I made yesterday used Czech size 8 seeds which tend to be smaller (shorter from end-to-end along the hole) and Chinese faceted round beads. These scare me a little as their holes are often sharp, so I'd rather avoid a design element which will result in a finished item with a somewhat abbreviated life expectancy, if at all possible.

So I made another, using Japanese permanent finish gilt-lined size 8 seeds and Czech fire-polished beads and honestly, I'm not sure. 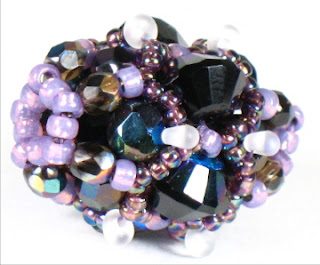 I don't know if it's because I don't like the violent colour contrast or whether the different beads made a real difference, but all I can say for sure is that I'm going to have to do this one more time, which is ok I guess, as it's not a massive investemnt of time if it turns out to be not ready for it's close-up after all.

And this fragment of a cuff (apart from my colour choice, which doesn't sit right with me) ended up not including some of the design elements which I was so very certain were integral - and yet they were not, and I'm quite pleased with it overall.

I like the open spaces, and I think I can make it into a necklace too, always a plus. It also makes a wonderfully lightweight earring that's still a bit of a show-stopper.

Back in the Land of the Living

I've been making little beaded beads using (among other things) twin beads until I ran out, so I used other coordinating colours.Then I ran out of the fire-polished beads that gave it so much oomph, so I had to make further adjustments to the colour scheme, until eventually, short of a shopping expedition (which I'm not against mind you) which would involve a Whole Lot More since my favourite beads in the project are from an online vendor, I realized that I needed a focal bead.

Given the amount of time I've spent and the number of transactions involved and the resulting weight of the box where I keep my lampwork beads, not to mention my penchant for certain neighbourhoods in the colour wheel, you'd think I'd have a dozen or two beads that matched perfectly, but in fact there were none, not even beads of the wrong shape or size. 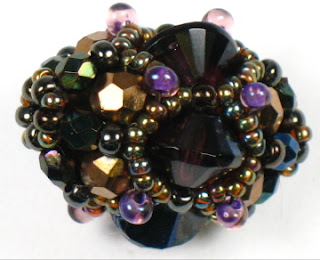 So I had to make one. 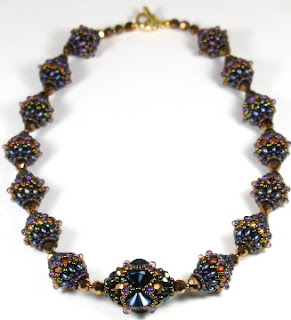 Tools of the Trade (Perhaps. I Don't Actually Know)

Disclaimer: I'm not a furniture or upholstery professional, and even if I were on TV, I probably wouldn't play one, but I'm a highly optimistic amateur.

I've made well-fitting slipcovers for two sofas (with separate cushions etc) and recovered the stools in my kitchen.

Just in the interest of full disclosure and all. 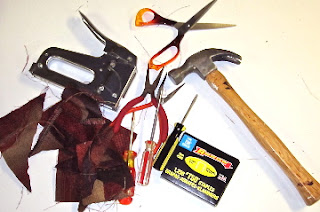 Once upon a time there was a woman with a mahogany dining room table that used to be her grandmother's, two small children (two and four or thereabouts) and no dining room chairs. So she bought a set of chairs with blah beige seats which she didn't care about since the children, as children will, intentionally or not, were undoubtedly going to ruin them. The children did, as is wont to happen when fifteen or more years pass, grow up, pretty much, and as a benefit of same, their table manners improved such that the possibility of more attractive and more comfortable seats on the ugly and uncomfortable dining room chairs became a very real possibility.

There was research into seat cushions, with the by-the-foot stuff at the fabric stores being rather disappointing, so I made a new friend at the only foam place in the area which turns out to be walking distance from my house. Turns out that people, other people, not me, have the oddest foam requests ever (I asked). Like the woman who wanted a (rather thick) mattress for her disabled son with a hole drilled in at at groin position, so that a bucket could be placed under the mattress so that she didn't have to get u during the night to take him to the bathroom. I kid you not (though my friend at the foam store may have been testing the limits of my gullibility but I don't really think so).

My new dining room chairs have two-inch seat cushions instead of a measly half inch.

Fabric stores were visited, swatches were brought home, the interwebs were scoured, but nothing was really supercalifragilisticexpialodocious, so she made do with second best at fifty percent off at Joann's which is actually ok. 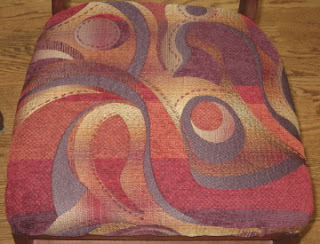 I am here to tell you that this was a manlier task than I had anticipated.

I have blisters on my knuckles where they scraped the wooden seat as I pried the staples holding the old fabric free.

I have a blister on the side of the pad of my middle finger from screwing the seat bottoms back onto the chairs.

If I sit for more than five minutes it feels as though I might not make it up again.

If I turn my head I hear crunchy things in my neck.

But I do, even if I say so myself, have a fabulous set of dining room chairs which (in money though I guess not effort but really, when you consider the level of smugness and self-satsifaction involved has to be worth quite a bit) cost about what one new chair would have set me back. 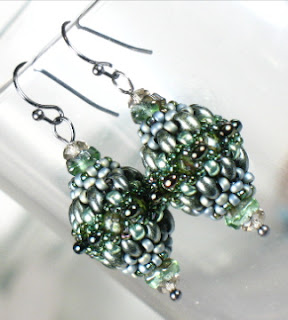 They're actually really good as earrings, as they're very light. And I like the shape that the addition of the accent beads gives them.

I had thought that since it's right angle weave (mostly) and Tuesday's class involved doubling and halving the number of stitches, that this would lend itself well to working the beaded beads not as individuals, but as a string of beads. 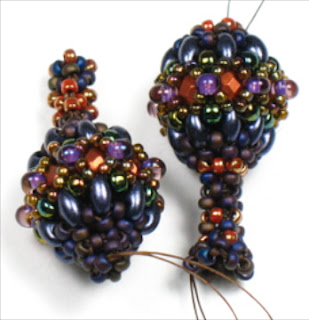 Adore the colours together, but the shape is so unpleasant that I had to do it twice to convince myself that it was a mistake.

The one good thing from this is the new necklace in my future from the beads I'll get after cutting these up.

Over the weekend I explained to my houseguest that I needed to spend time preparing for tomorrow's class, and that I really preferred to get it done over the weekend as I had something I wanted to do the night before (this evening).

Every time I got up from my beading table, she brightly asked "Are you finished?" to which I mostly answered "No", "Not yet" or some variant, which eventually became "Almost". I might have sort of said "Yes" at one point, but it wasn't the last time I threaded up my needle and poured out a few piles of beads.

The truth is that while I may complete a specific task, I'm never at the point where I'm so finished that I should just go shopping or get a manicure, because right around the corner there's the next four months of classes for which I need eight two-hour sessions worth of classes, or a guild that wants a beading intensive weekend, or a show that I'd love to travel to, erm, teach at. 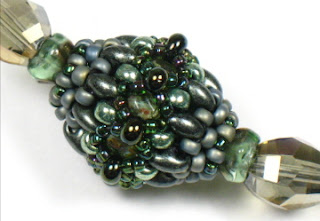 There is for all practical intents, no end, quite apart from the fact that I really like it, and I have more ideas bursting out of my head than my fingers or the free hours in a day can accommodate, so that every time I trim that last thread and take a few pictures, I can turn around and start on the next hare-brained bright idea.

Like this little beaded bead, all mildly successful variants of which are in the necklace below. 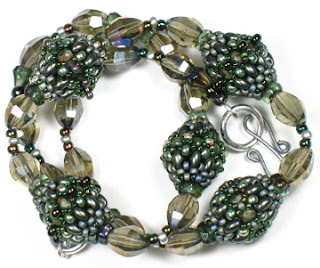 I preferred 4mm fire-polished beads over size 6º seed beads, small magatamas over farfalle and size 11ºs and those funny little glass bell flower beads fit so nicely in the rather large holes at each end, don't they and oh I wonder if I could modify what I did to make a chain? 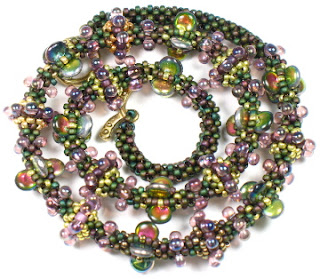 It all starts with the lentil beads, in this case vitrail which is a finish rather than a colour, an applied coating on one side of the lentil with iridescent flashes of green and magenta.

My first try used too much magenta, not enough green, too dull, and it plodded while I made little acorns instead yesterday. Actually the first iteration used different lentils altogether, and that combination bored me beyond tears, to almost screaming. Vitrail was better aligned with me somehow.

I tried four different shades of metallic gold as the accent, and didn't remove any of the losing candidates. The first is the dullest, and sits at about five o'clock. I then tried the acid gold that I stuck with, but remained unconvinced that it was The Best, so I also tried a more traditional yellow gold (at around nine-thirty), as well as a more golden gold which you can see at about eleven-thirty.

I also briefly tried an alternative to the dark dull burgundy that you really can't see except where I changed it for a mauve near seven-thirty.

Even though the entire chain is little more than cubic right angle weave, every unit changes in either the bead counts or the bead colours, so it's not entirely dull and not utterly onerous. And I really like the chain. It's light and fluid and textured and feels like small burgeoning life. Spring and pre-teens and kittens and day-old chicks and the first leaves on old oaks.

Slowly I'm building another twenty-hour necklace in fits and starts.

I pretty much love the one on the right because the beads are too, too fabulous. They're blue glass with pink lining, frosted, and reading royal purple. Delicious!

While preparing for Tuesday's class, I happened on this cute little egg-shaped beaded bead. 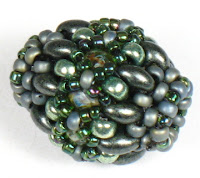 With my normal (on the tight side) thread tension, it only needs a little embellishment around the equator to be quite firm, but it's barely embellishment, and it's awkward, though perhaps with a loosey-goosey bead it would be easier. 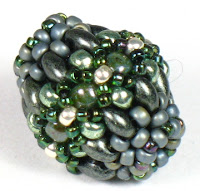 It's possible that if the base bead were too loose, the overlay wouldn't stiffen it enough though.

The earrings and button closure I made for my twenty-hour necklace are worth an entire project in their own right. 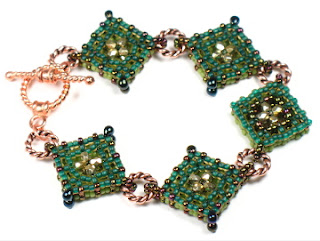 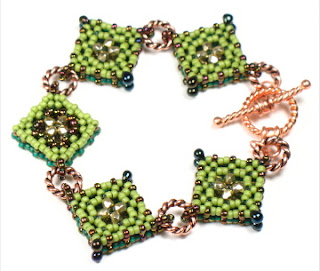 Or a light green bracelet. 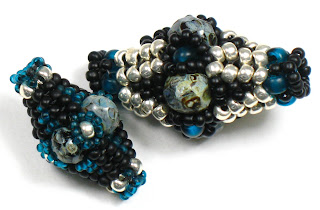 Not sure I adore the larger one, as the bigger seed beads give it a coarser look, but I suppose they have the advantage of being easier to work with.

This is the final version of this pendant. 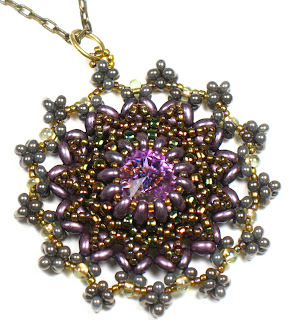 I like it both with and without the last round. The space it creates makes it lacier, arier, but I like the starriness of the one below without it. 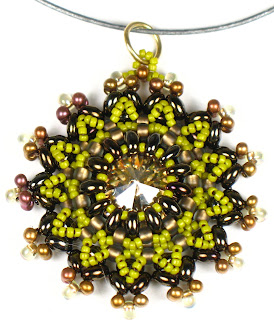