So here I am at about the halfway point of a four-day weekend for a holiday I don't celebrate with this long list of all the things I was going to accomplish with all that free time and all that I can partially cross off the list is the decision regarding what knitting project I'll take with me on my trip to Rome next month - and I haven't even picked out the yarn for it (though in all fairness they were listed as separate sub-bullets).

On the plus side I've somewhat re-engaged with beading, working out the kinks in a slightly challenging project which although technically complete is most likely only a jumping-off point for something else I can see in my mind's eye but haven't figured out how to do it relatively easily.

It's not that it isn't doable; it's just that it'll be awkward and unpleasant in the stitching and I can't in good conscience propose it as a class because it'll not be any fun to make and then what's the point. 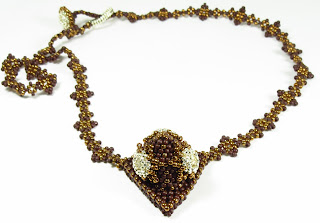 In this incarnation is looks rather insectoid in pictures though in real life might be a bit better. Or not. I'll wear it at least once anyway. 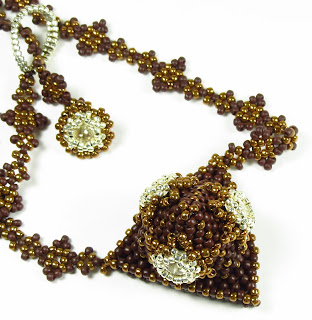 It's a three-sided pyramid-ish structure with a crystal on each face and I'm satisfied with the engineering (a bezel for the chaton that's attractive as well as secure, is embedded in a triangle and doesn't rely on insane thread tension alone) but the aesthetics leave a bit to be desired.

It's not actually a pretty piece and even if I made it in gorgeously pretty colours it would still look like the head of a locust.

I'm happy with the chain though, so that's a plus.

I've been knitting as I burned through three seasons of Orphan Black and one of True Blood but I fear the colder weather isn't kind to my hands which are lately afflicted with sharper pain than usual. But if not now then when? It's not as though there's any healing in their future. 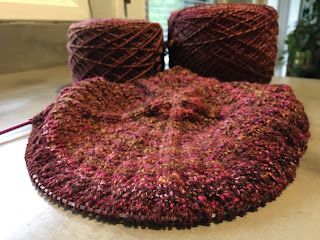 The knitting has progressed since this picture was taken; the back is finished and the front is well past this point already. It's handspun yarn which I'm knitting at a slightly looser gauge than usual as I want some drape to enhance the a-line shaping and I'm pretty much enjoying the way it's turning out.

Mostly I'm in love with having an active knitting project. That's kinda huge compared to the past few years. 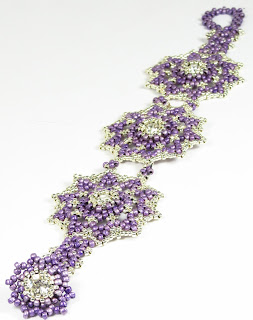 I made a bracelet as a class sample and while the button-and-loop clasp is quite pretty, it's really difficult to fasten and unfasten as neither the button nor the loop is smooth and so they snag on each other which is really annoying. Pretty but flawed. 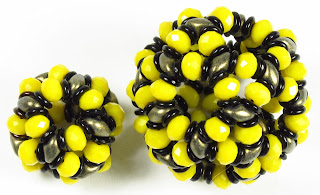 And apparently I can't stop making these things. They're ridiculously simple but I need to figure out how to actually use them. I should have placed the little one inside the big one perhaps. I'm not sure whether or not it would fit and even then - what would I do with them?

It's really remiss of me not to self-promote: Bead and Button registration opens in January although growing is already open and I'm teaching five classes!

I'm here, doing stuff but quite a bit of it is knitting and as endless pictures of knitting progress are hardly scintillating, I guess I've been pretty quiet - but I have made Things!

There was a beaded bead in which I thought small dagger beads would work.  They did not. 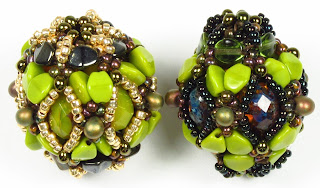 So I remade it without the dagger beads, one six-around and one five-around. The five-around bead is more oval than round which pleases me better. 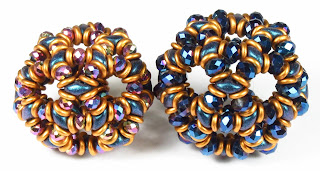 I made some more of these truncated dodecahedra just because they're quick and easy (but wait until I teach it and see if the students agree. I'm pretty sure there will be disagreement, at least initially).

I'm not sure how this pendant started - I'm pretty sure it was something else entirely like a bracelet or some such. 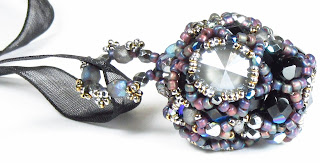 I liked it so much that I made another one in murky shades just off grey and silver. This one's mine. It really deserves a better necklace. 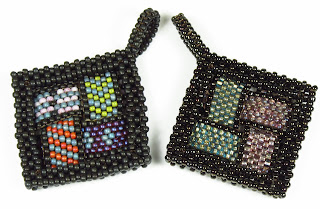 And then a patterned sample supposed to illustrate just how much fun one can have with this design. I'm actually not joking (for those that think beading is fun. Like me).
Posted by Charlene at 12/20/2016 09:48:00 PM No comments: