Yeah, it's been that long. 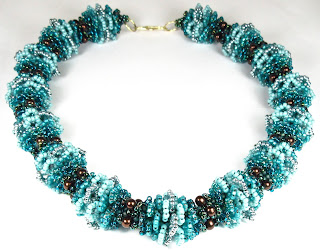 Turns out what of what I've been making has been remakes of things I've already made.  I made the above in red before, all one shade and using Czech seeds instead of Japanese. I like the delicacy of the Czech beads better, but I think the colour gradient makes it much more interesting.

The necklace below was supposed to have a crystal pendant in the centre, and it did but I had to cut it away as the seed beads scratched the finish off it and it looked quite bad, not to mention being a waste of a perfectly nice and not inexpensive focal which I'll probably now dip in etching fluid so that at least it's usable. 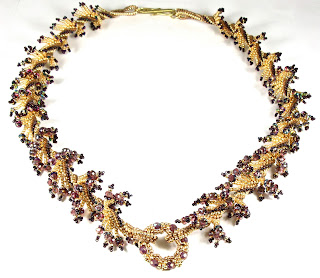 Next time I'll use something that is coloured in the crystal and doesn't have any sort of coating.

The necklace below was originally made as a pair of earrings using a rather uninteresting colour combination so it was pretty but blah. I like how striking the murky main colour with the shiny accent is in this version. 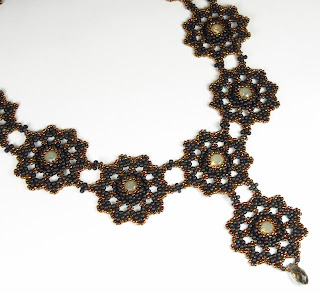 I had all sorts of plans for this square motif and I'm not sure I adore the arrangement I came up with although it's OK I suppose. I think perhaps I should have foregone the drapy stuff and connected the side pieces much closer to form a vee. 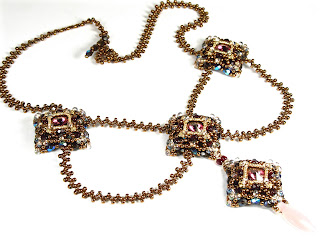 I'm not entirely sure what else I've been doing the last three weeks because this looks pretty meagre all laid out here.

I'm pretty sure there have been incidents with water causing trouble because I did some serious outdoor caulking and have had all manner of water-related service calls to my house.

I did cook something pretty and delicious and I confess to be sightly obsessed with making these spicy little baked salmon wonton rangoon thingies: 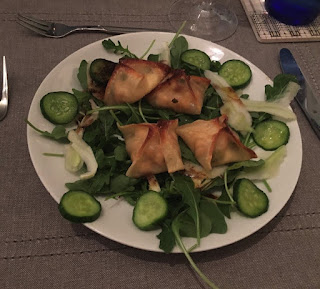 Served over arugula, shaved fennel and lightly pickled cucumbers with a drizzle malt and balsamic vinaigrette, they went over really well at last night's dinner.

My biggest accomplishment since last I posted (though it happened twenty-six years ago): 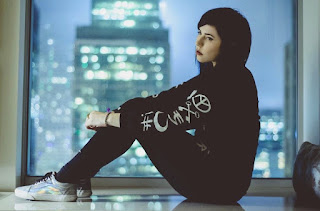