A pendant for tomorrow's class: 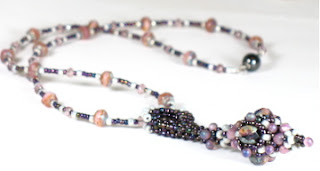 It's only a little more effort to string a coordinating necklace than it is to cut chain and attach a clasp, and it really looks so much better.

In Which I'm Horribly Late

Yesterday my friend Julia got married and I was an hour late for the wedding, missing the ceremony and much of the reception.
I felt like this:

And the truth is, I was confounded by misdirection.
I gave myself an extra half an hour, and ended up taking an extra hour and a half .
It started with construction downtown and a detour which probably added an extra ten to fifteen minutes. No worries, I still had another fifteen and Intent To Speed.
When I turned off the highway to take Indiana State Route 69 my troubles started. Mapquest sabotaged me with spurious turns, non-existant signs and incorrect hints. I back-tracked quite a few times, once incorrectly. With twenty minutes to go, I still thought I'd make it. Things like this often don't start exactly on time.
By the time I recognized the neighbourhood near Julia's house, I knew I was way off-track, so I attempted to turn back but instead got on the wrong highway. I didn't recognize any of the landmarks, but thought it was because I was so panicked getting there that I didn't notice them, and by the time I knew with horrible certainty that I was was utterly lost and so stopped to ask for directions, I was a twenty-five minute drive from campus and already more than a few minutes late.
By the time I finally reached USI, all I had was the invitation and this map which it turns out was just not as useful as one might hope, as the sun was down and the signs on the buildings are not lit and are positioned for the pedestrian. Panic, embarrassment and the same misguided belief that causes one to knit faster as the yarn starts looking pitifully inadequate dictated that I drive, though eventually I gave that up too.
Saturday night on campus is not very busy, and some students are better at directions than others, as it turns out. 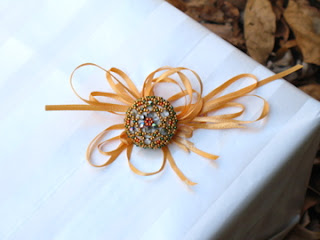 At least the decoration on the gift was:
I hope they like the gift too.
Still, I was beyond mortified. I am not someone who regards herself as unreliable or habitually late.
Julia looked beautiful and happy, was astonishingly understanding and I got to meet her family and the friends I've been hearing about for the last fifteen years, not to mention her new husband (about whom I've been hearing for less than that!)
The drive home was long and late and very dark, but with the help of an over-large bag of Chilli-Cheese Fritos (ah pregnancy, I don't miss you at all!) I made it home before it got light.
Posted by Charlene at 10/30/2011 09:29:00 AM 1 comment:

The kitten has been keeping me very busy. He's just too cute for me to get anything done.
There has been a bit of knitting though. 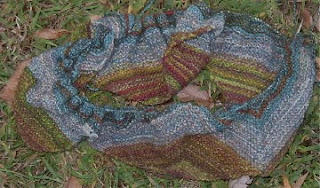 It's a cardigan, can't you tell?
Another one where I use up small amounts of vaguely coordinating colours, preferably more variegated than less.
There's been minutes of beading, apart from class last week and working on instructions for next week's.

I discovered one more SOAR photo. 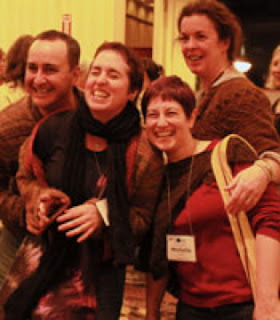 Yes, it was that much fun.

...when there's a very curious kitten who won't pose for pictures: 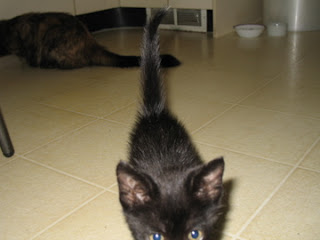 ...when a kitten prefers the other water bowl, y'know, the one that belongs to the other cat. 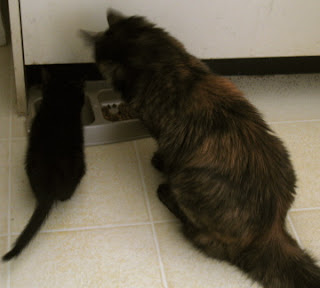 ...when cat people come to visit: 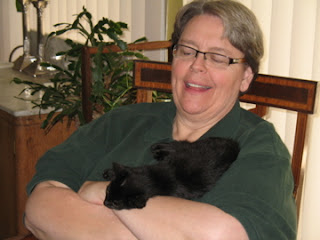 In case you couldn't tell, here's a close-up so you can see how tough he finds his new life. Awful, isn't it? You can tell by his expression he's having a ghastly time here. 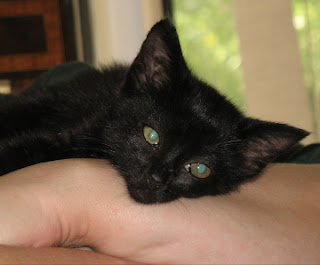 ...when you need to dry your handspun yarns in a cat-proof kinda way: 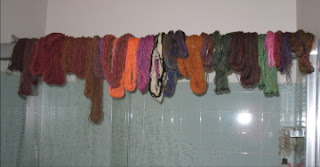 I don't really like Martha Graham all that much.
I found her style as silly as early Star Trek episodes: too much drama, very dated, though sadly less entertaining. Some of the dances inspired by her style were OK, but one in particular I'm pretty certain that the dancer must refer to as "My Art", when it was mostly pointed stares, hair tossing and odd stances, much like Blue Steel.
Now I know.
Turns out that it takes forty-eight hours from introduction to full-on cat wrestling.

[I had an excellent Feline WWF video which no one seems to be willing to upload: not YouTube (which Blogspot said I needed) nor facebook, so you'll have to accept my rating on faith. It showed how when teeny-tiny little Anubis asked for a timeout by hissing, Isis just lay down].
I took exactly one photo at SOAR. 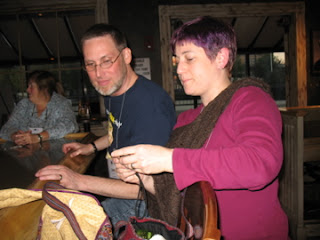 John and Evil Michelle at the end of the first day of Workshops. 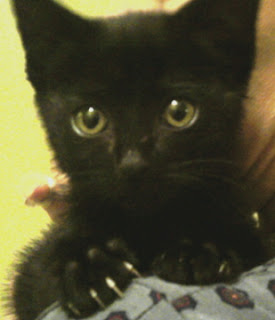 Email ThisBlogThis!Share to TwitterShare to FacebookShare to Pinterest
Labels: kitten

So I was at SOAR last week and stuff happened. I spent lovely time with old and new friends and we laughed we cried we drank pink wine we knitted we spun and ate chocolate and nuts and came home again, so that's all in the past.
What was, was.
Or as my dad used to say in a fake Yiddish accent, "Vot Vos, Vos". 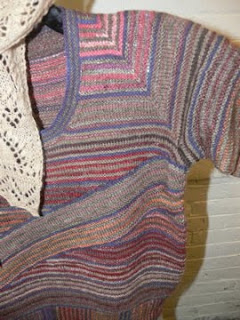 I finished the sweater in the air on the way there, so it was able to go in the gallery and was able to be photographed by Ercil who posted it on Facebook whence I stole it. I hope it's OK. If not, there will be a big fat nothing above this paragraph when she makes me take it down.
My cat was annoyed when I got home and she'll be even more annoyed when I get home tomorrow as I'm going to adopt a very young kitten that someone brought in to my vet. She needs a playmate since my son left for college as she's a rather sociable creature and seems to be just too delighted to see me when I get home after work. My daughter's in and out but not often enough for my little furry princess, so she'll get a buddy whether or not she likes him.
Of course I hope she does.
Meanwhile I'm still trying to catch up on sleep while itching ferociously (it's like poison ivy in my brain) to start on EVERY SINGLE inspirational idea I had while there.
All of them.
Now.
I want to.
Posted by Charlene at 10/11/2011 07:19:00 PM 1 comment:

It's not as though I've been doing nothing (Drive with Ryan Gosling, mmmm, not nothing), but it's just not quite enough. 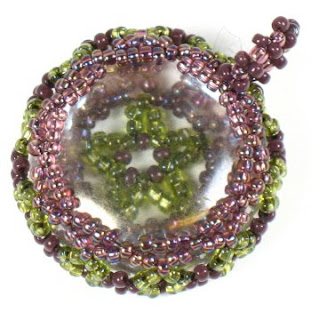 I think I'm at about eight or ten now. 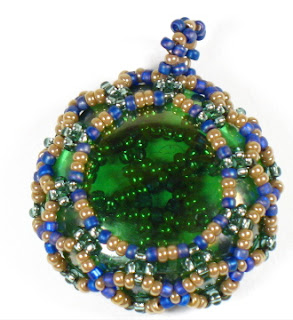 This one turned out to be rather time-consuming, but I'm not sure it's necessarily all that elaborate. 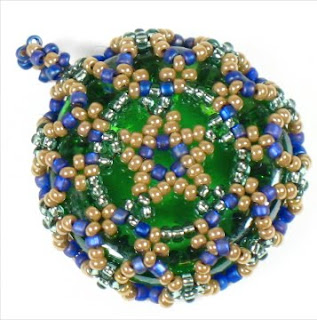 I mean, perhaps not elaborate-looking enough for the effort.
And to prove that there's been knitting: 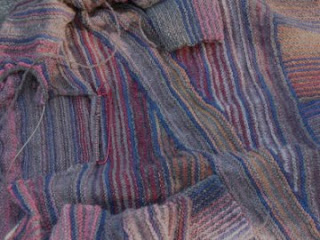 It's not beadwork, so my photos completely suck (as opposed to only sucking slightly), but as you can see, when I took them, there was just a little more raglan shaping to go. 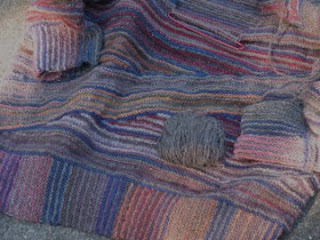 As I write this, I've started picking up the neckband stitches, so I'm well on my way.
Since I'm going to need more than a neckband to keep my knitting fingers busy for the next week (though I suppose I could spin; what a concept: spinning at SOAR), and both pairs of socks are three quarters done (both have a single and a half: one half is a foot while the other half is a cuff), and I didn't entirely like the yarn I dyed for my Australia trip (which I didn't exactly get to), I slightly overdyed it. 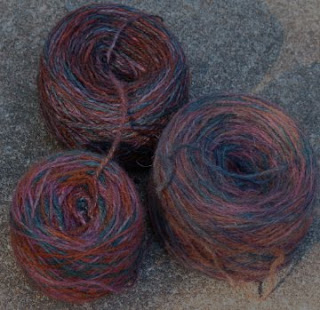 Again, super-crappy pictures. The ugliest one is truest, while the ones that are prettier in real life look as though I shouldn't have bothered to show them off.
Posted by Charlene at 10/01/2011 11:05:00 PM No comments: 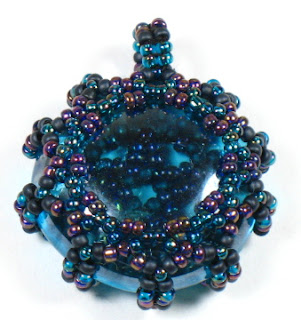 This one makes six. 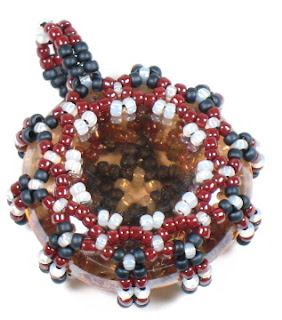 This makes seven - but wait! 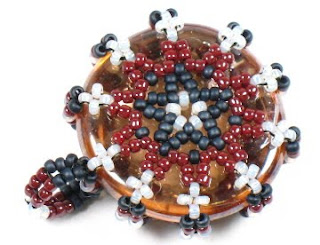 The back? Not quite the same as the others.
These are quite quick to make, not grindingly dull, you can play with colours a bit, but I suppose it was inevitable that I tweak the design. 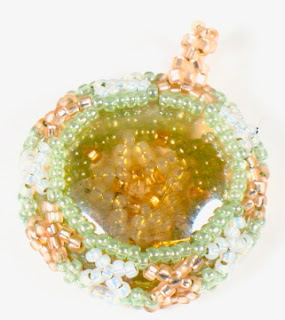 Pardon the weird colour which looks like a Polaroid taken in the Seventies of Really Bright Colours which sadly (goodbye, family photos) did not survive more than a decade or two - but really it's just a set of pastels that look much better in real life (my photography skills, yadda yadda). 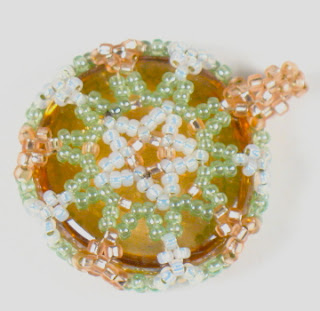 I'm kinda liking this variation thing.
So I'm up to eight, not nearly enough and I leave in (checks time) twenty-ish hours. Damn the need for sleep! I can probably finish the sweater on the plane, but the pendants are less plentiful than I'd like.
Posted by Charlene at 10/01/2011 12:24:00 PM No comments: