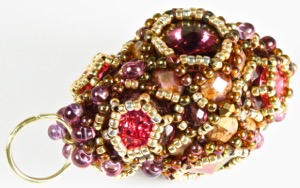 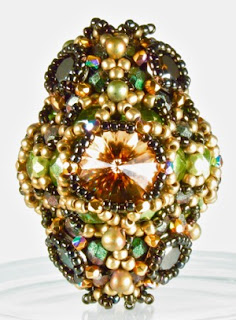 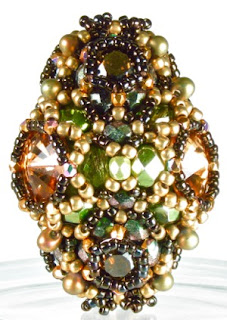 I Can't Explain It Completely

I was silent from March until a few days ago and now it's talk talk talk and maybe it's enough already and what's that about.

All I can say is that I'd think about the blog and the pictures I should post and it somehow seemed less important than sleep or relaxing and it felt like I didn't really have anything to say - and maybe I still don't but am fooling myself that I do - so I didn't. And then I wanted to say something.

I'm on Instagram and somehow that's easier and I guess I like that it's spontaneous and I suppose I should make a button so you can go there if you want to. There's almost no beading, occasionally some knitting, a cat picture from time to time, food, pretty cocktails and travel pictures. You know, just like the rest of Instagram.

There are two types of people: those who have to have earrings that match (as in exactly; part of a set) their necklaces and those that don't care one way or another. Actually three kinds, those that absolutely must, those that absolutely must not, and those that don't give a damn.  When I make necklaces that I plan on selling, I often make matching earrings but I don't sell them as a set since all three types of people will buy a necklace or earrings but not everyone wants both and so generally the sort of person who must have matching earrings finds that someone else already bought them (because earrings aren't a big investment).

I have a friend who is a really good customer and who invariably has a list of earrings which she wants me to make every time she goes shopping, but to tell the truth I make stuff because I want to and am in the mood and the tides are right or whatever and I'm not focused on making a living off my beadwork (luckily: I'd be living in a cardboard box under a bridge somewhere) so I'm casual about fulfilling those sorts of desires of my customers.

There's always a class that needs instructions by Tuesday, or class proposals that are due or colour-ways for kits or, you know, the day job which really eats hours and hours of what I wish were free time.

Cindy's birthday celebration is tomorrow so I dug out my notes and made her earrings. The matching bracelets are highly unlikely to ever materialise quite frankly. 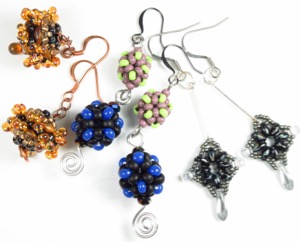 I've still been fooling around with the beaded bead with chatons and finally came up with something I like enough, but which is really uncooperative in terms of its being photogenic. 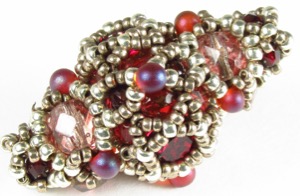 The problem I suppose is in part that it's a three-sided shape and so it's always lying at an odd angle but in real life it's moderately attractive and sturdy - the latter being almost as important as the former. 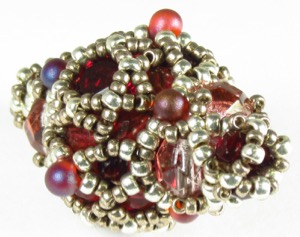 It's about an inch and a half long.

I'm also not done yet because More Ideas.

Both this beaded bead and the pendant which inspired it begin by constructing the band around the equator - you know, the fat part around the middle where my maternal grandfather insisted on putting the waist of his pants. He had a very large equator and instead of opting for the usual solution to increasing waist size - actually he was always large as far as I can recall - which is to say, pushing the waistband below the bulge of the belly, he instead required very long belts. Where was I? Oh yes, beaded beads.

Well, anyway, I found a good way to join the equatorial region of the original pendant made with rivolis to the smaller equatorial region of the beaded bead made with chatons in a reasonable way (attractive and sturdy) but I ran out of steam and only have two-thirds done so no pictures. I think I may not enjoy the doing, which happens sometimes, but I'm determined to finish it because I'd be happy to adorn myself with it.