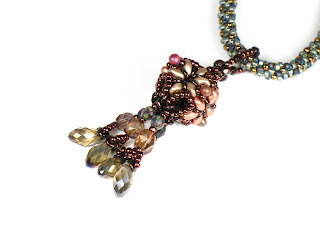 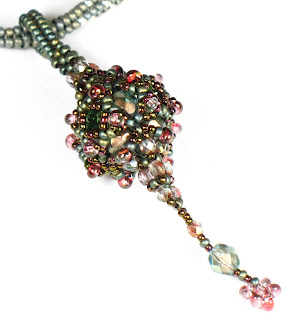 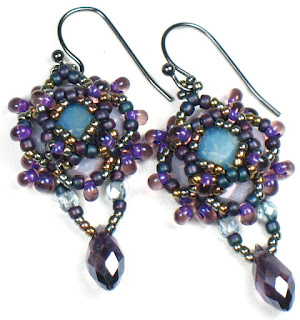 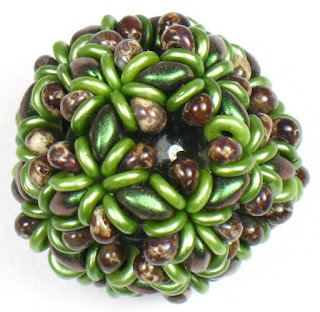 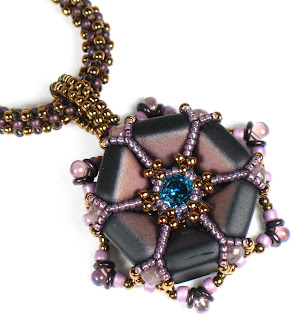 I Didn't Really Mean It 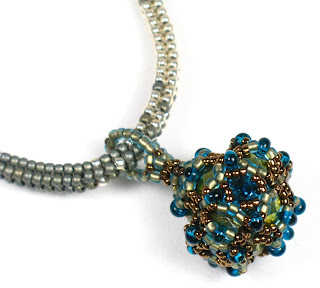 I mean, I was aiming for a small beaded component with a chaton, something flatter than not, perhaps something that could be joined one to the next for a bracelet or necklace, something that would make a pretty drop for an earring, and then it happened: I kept going and ended up with a pendant (or perhaps a beaded bead, had I stopped before closing up one of the open ends), generally petite in the grand scheme of Pendants I Have Made, but more substantial than imagined.

I guess I forgot to say anything last weekend but after I made the first version of the little beaded bead I kept going.

First I just scaled everything up which left the sticky-out bits less firm and with some thread showing, but a better size for a pendant. 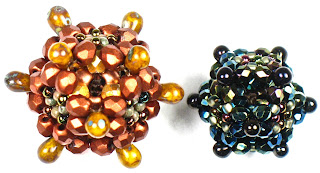 Then I tries using non-round beads: first flower cup beads; I'm not sure what the technical name is, but they're flowers with a short almost conical shape. That's the pinkish one in the middle which was almost invisible every time I tried photographing it (I could have tried a darker background I suppose) and it's interesting but not viable as the beads compete for space so it just ends up looking sloppy which is fine for freeform or fringe but when I'm fooling around with geometry it just Will Not Do.

The purple one is when I finally got it right: the combination of bead sizes and shapes that changes some of the right angles to acute or obtuse and still result in a stable configuration and have enough visual interest without having to resort to too much in the way of overlays or embellishments. 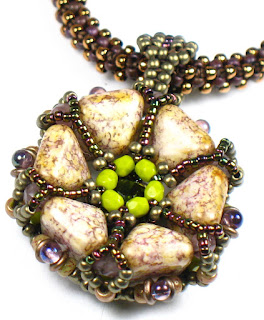 And then I was on such a roll that I picked up an old project which I somehow could never get to be both visually appealing (though I suppose that depends on your point of view) as well as possible for most (beading-type) humans to stitch without breaking needles and becoming unhappy and angry with me.

In this instance I measure visual success by the fact that you can see the shape of the bead studs which add to the design rather than sitting awkwardly amidst better-behaved beads which barely tolerate it, the back is not something which should be hidden from view at all costs, and if someone chooses to use thread in a colour which does not blend with their beads, normal firm stitching will not leave it exposed. Plus fringe beads and a chaton and stuff.

There's something magical about not having bead show preparations consuming my every waking non-day-job moment combined with a few days of really long and onerous meetings at the day job which leads me to sketch things on endless pieces of paper so that when the weekend finally arrives I won't have a single instance of what-do-now except in the sense of choosing between which design I want to try beading first.

I Couldn't Be More Pleased

I won't even show you the piles and piles that have been semi-unpacked but not put away. I'll get to that when I've had ore sleep. 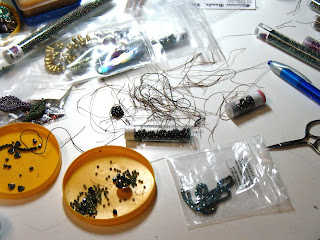 The pile of wiggly thread looks deceptively small, but it represents at least four little things which were cut apart. Nothing was working. I couldn't get started it seemed. 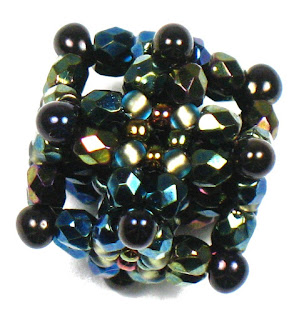 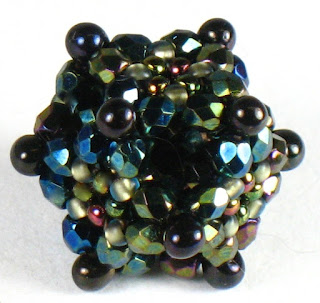 And then when you view it from a slightly different angle, you can see. Next time I'll use lighter and brighter beads so you can see too, but it's a lovely, airy thing with open spaces and passages just perfect for a herringbone rope for example.

In this incarnation it might even be light enough for a rather substantial earring (not sure; tests are in order) but I think it'll scale up nicely to a rather eye-catching pendant which might even lend itself to some interesting embellishment. We'll have to see, won't we?

Every single bead show is the same: I start off with the best of intentions to photograph every class I teach and if I'm lucky I get the first one and then it's as though I don't own a camera. 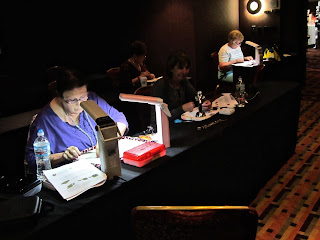 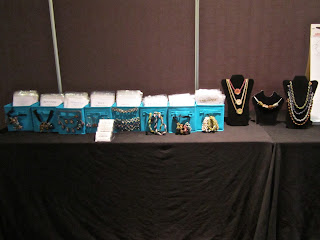 I finally hit upon optimal (for me) kit displays in class - even better, with stuff I already owned - and it worked out pretty well. I was able to bring some of my newest kits to class and set them out relatively quietly. My wheeled thingie in which I hauled them was suboptimal for Milwaukee's wind though, as the lid blew off in the middle of an intersection and scrambling after lids while keeping an eye on contents threatening to scarper too is not my most favourite thing to do in the entire world, but luckily it wasn't extremely windy for too long.

I have no complaints about the classes so far (not that I'm anticipating a bad time) and I'm very grateful that none of the students signed up classes beyond their skill level: it stresses them when they can't keep up, requires a lot more attention from me which is problematic if the class is larger and other students feel neglected. I also feel awful if it's obvious to me that the student is no way, no how ever going to be able to complete the project, at least not in the near future.

But so far, so good! 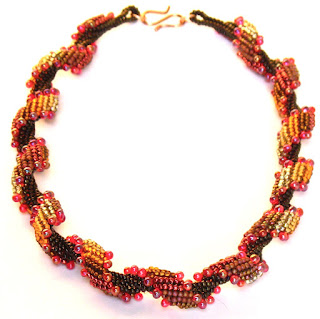 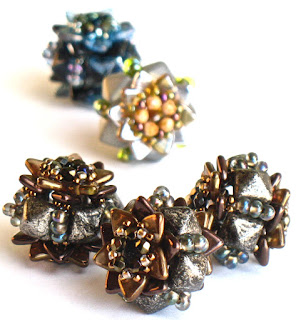 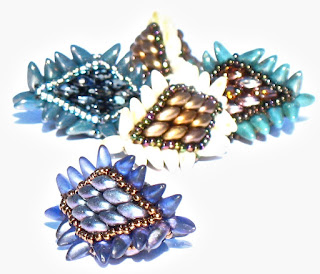 And in between I even managed to noodle around with some ideas which will totally be discarded, but that's just fine too. I don't mind - I'm happy that I was in the right frame of mind to do it. 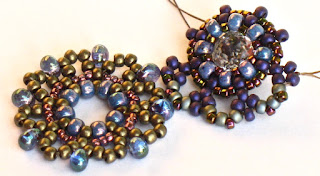 This evening is my last class (of four) followed by Meet The Teachers which makes for a long day but it's not as though I have to get up early tomorrow or anything, so it's not a problem.

Or it wouldn't be if I hadn't stayed up until two this morning watching episode after episode of Homeland because it was so FREAKING EXCITING.

The very best thing I did this year was to buy a portable printer because I'm tired of trekking to Office Depot to print out a few more things that it's possible (in y'know, Utopia) that I might need if sales at Meet The Teachers are better than they've ever been in the history of my universe (I'm not complaining, I'm just saying) for the cost of ten reams of paper (I'm actually not exaggerating) that turns out not to have been necessary after all.

I almost baulked at the price (the smaller, the more expensive) and finally reminded myself how annoyed I get, and I'm so glad I did. The printer is a couple of inches thick by about the size of a piece of paper (an 8x11-sized piece of paper, obv.) and weighs almost nothing and even though the print quality of the pictures isn't as good as my printer at home, it definitely does the job, and it'll have paid for itself in a year or two.

All I need now is a hotel room with a bigger desk. Between the printer and the laptop the space fr beading is a little cramped.
Posted by Charlene at 6/03/2015 01:04:00 PM No comments: