It's not completely empty, mind you, but it's reduced a bit.

I made this pendant a month or so back and decided it needed its own bespoke chain. 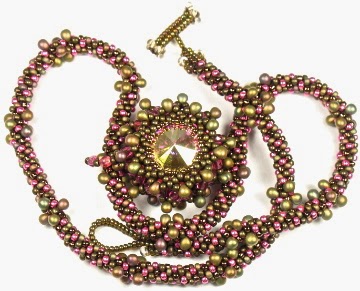 One that would look good with both faces. 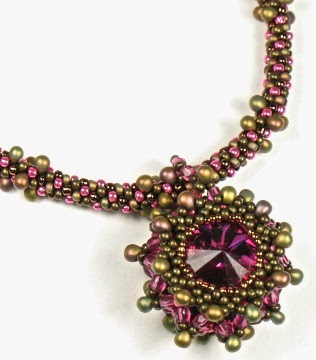 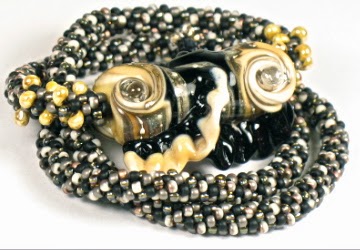 She'd have been thrilled, I know it. She loved it when people used her beads, I think especially when they used them in ways that she would not have (she wasn't a seed beader at heart).
Posted by Charlene at 9/28/2014 10:49:00 PM No comments:

Pretty much exactly as planned. 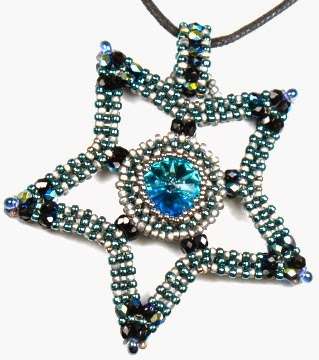 I didn't decide how to suspend it: whether to make it a pendant or a necklace, nor how. I could have added a bail at the tip of one of the points, but that could make it unstable and prone to flipping over (not that the back is ugly or anything).

I like the way it turned out better than all of the other possibilities I considered, and I didn't even have to cut them up to know that.
Posted by Charlene at 9/26/2014 08:06:00 PM No comments:

Getting Back in the Groove

I'm not sure what's been happening for the past month or so, but I've been feeling as if I have zero creativity and have been getting nothing done, not even sketching out ideas because I had none. It's an uncomfortable feeling, not having my head buzzing with ideas.

One of the necklaces she bought was a kumihimo rope with long magatamas alternating directions along two edges and I honestly wasn't sure what I'd make to coordinate with it since I've never had any luck doing anything except kumihimo with the long magatamas.

First I made a spiral rope, stitching each loop to the previous as it looked messy. 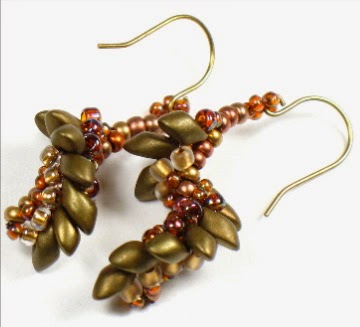 Then I saw a picture of a necklace and used part of the motif to make earrings. 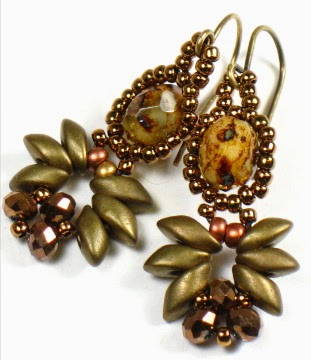 Not bad except I didn't use the same seed beads as in her necklace and besides, the earrings needed a dangly whatsit and oh hey! I could join them in alternating directions to make a chain and so her set was completed. 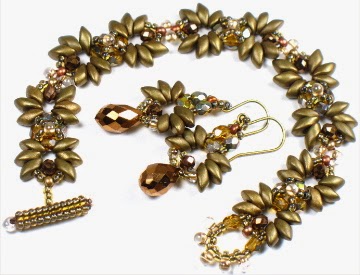 She'd bought another kumihimo necklace in which I placed mushroom button beads along one edge and as I prepared to make a matching bracelet, I saw to my horror that I no longer had ANY of the seed beads used in the necklace. None. And the earrings were giving me fits. I generated quite a pile of wiggly thread.

At length I gave in and did minimalist seed beading with a little basic wirework, and she was (luckily) charmed by the earrings. Honestly, I'd still like to do better, but that will have to wait until after she has a bracelet. (The bead store is open on Sundays. I now have suitable seed beads for the matching bracelet). 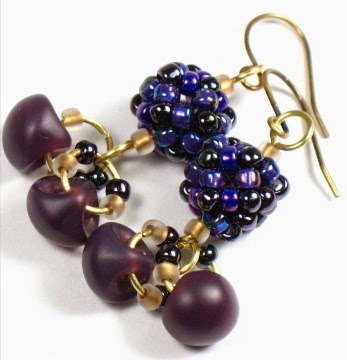 And then I played and generated the germ of an idea using the large (12mm) two-hole bead studs (and also some small ones, but those are easy as they're the same size as two-holed tile beads). 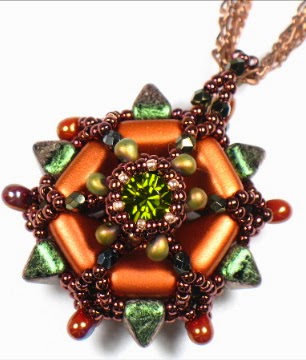 The chaton isn't seated neatly enough and the stitching required to secure it is very awkward, so I'll have to change something there. I also kinda hate the dark copper drops between the green pyramids because as you can see, they flop over. 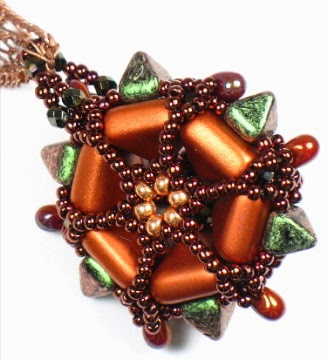 I Was On Vacation

At a cabin on a very pretty lake. 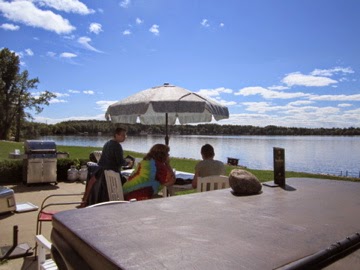 With a bunch of rather fabulous people who like to make things. 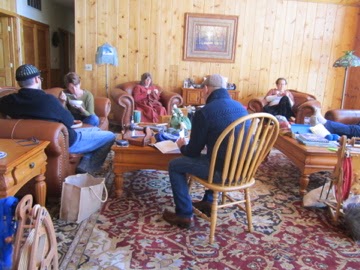 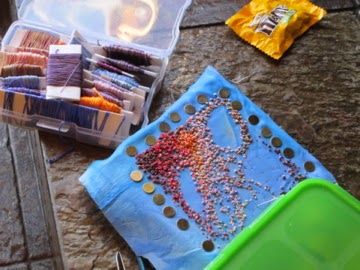 There was a dye day - you can't not have one, right? 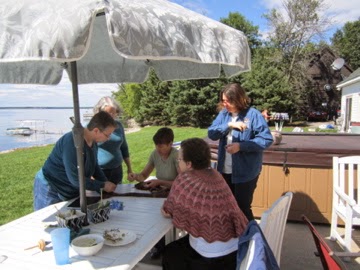 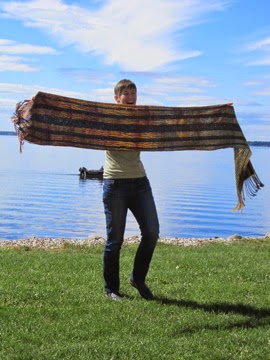 Shibori, bamboo warps, sweaters that had been washed with red jeans and needed rescuing, yak-and-silk roving that became even more gorgeous with colour, (delicious roving that I felted too much; less successful though the colours were wonderful), yarn, border leicester locks - if it was dyeable, it got dyed.

Food too, obviously. Lots of food. And adult beverages. 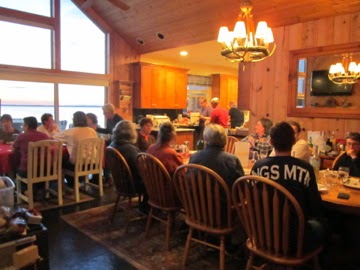 The lake was pretty even when it was overcast and grey. 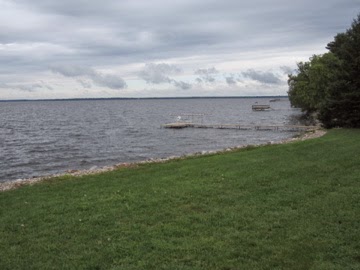 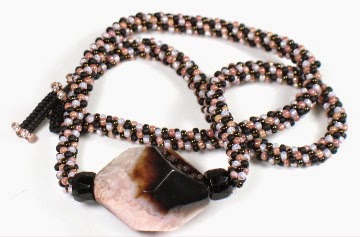 I finished one clasp in the queue. 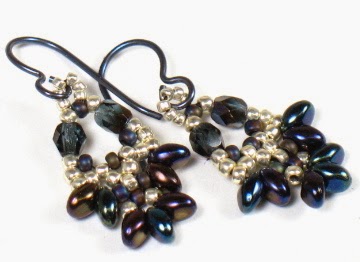 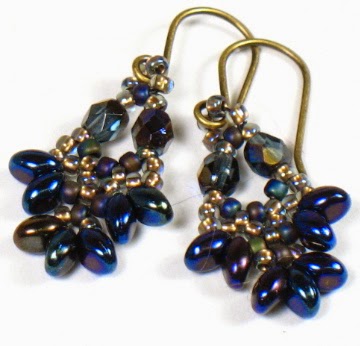 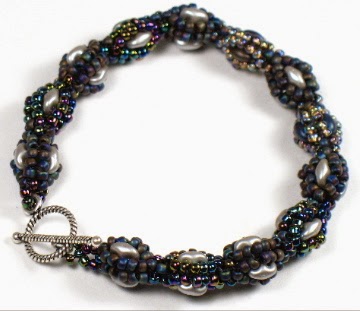 Like all vacations, it wasn't long enough and I miss everyone. I'll see them again: old friends, new friends who used to be acquaintances, new friends I met a week ago.
Posted by Charlene at 9/18/2014 08:32:00 PM 3 comments:

I've been doing a small amount of beading, I tried to knit for twenty minutes but it hurt, I've been (oh the horror) refinishing an antique card table into and upon which a pot-plant saucer leaked badly and surreptitiously not to mention rudely, and then I decided to have my entire team from work over for dinner to show them that I'm at least good at something.

It may have worked too well because they're placing orders and asking me when they should be here.

I really meant to take pictures of everything, especially the soup which was gorgeous when plated: fennel vichyssoise garnished with home-cured salmon and fennel fronds, but all I snapped was the plate of salmon garnish which came out blurry so that was a wash.

I found a bag of carrots in four colours which retained their colour after roasting. 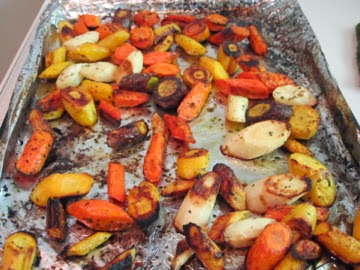 The salad was really pretty too, though not as pretty as planned. It was to be garnished with marinated and roasted red onions sliced to look like flowers, and indeed they did, sort of, but in this incarnation were too raw to be eaten in any sort of quantity: 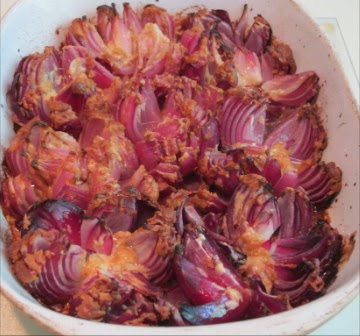 So I opted for flavour and roasted them some more.

I made Bestilla, but didn't turn it out. It was still pretty: 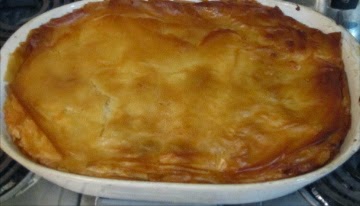 Not to mention delicious.

And accompaniments. Dessert was good, but not as good as my usual recipe, though the brandied cherries are something I need to have in my pantry ALL THE TIME. 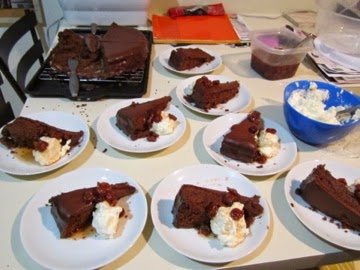 The astonishing thing (to me, who knows the way I usually do things) was that everything was cleaned up before I went to bed.

I knew I had stuff to do this evening.

Like finish the necklace that's been sitting on my beading table for at least a week: 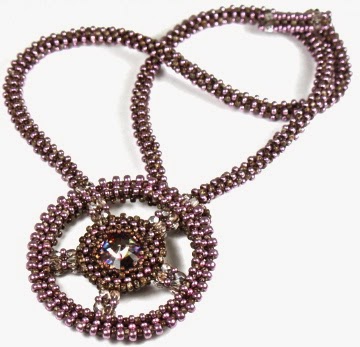 Not Much to Show

Honestly, I couldn't tell you where the time's gone or what I did with it.

Some was spent on a bit of furniture refinishing caused by one of those saucer things they make for underneath the pots used for indoor plants to catch any excess water which was more of a catch and release, resulting in the fabric table cover thingy (neither a table cloth nor a doiley. Actually I suspect it was conceived as an embroidered wall hanging but I've never used it as such since I received it as a present on my twenty-first birthday) being stuck to the table in a nasty way, and a great old black mark on the table underneath it.

The worst of the mark was lifted, but oxalic acid turns out not to be the miracle I'd have liked it to be.

I may have severely lowered the value of the antique card-table upon which this ugly stain was foisted by my attempts, but to tell the truth, I just don't care. I think I've matched the stain on the wood, and now French polishing lies ahead. Oh joy.

I wish they made a tool to aid French polishing analogous to a sanding block as I'd really much prefer a thingy with a handle rather than having to pinch-and-rub to get the shine on. My hands don't care too much for the pinching.

Be that as it may, I did make a rather simple little necklace enhancer but try as I might, success eluded me in my efforts to enhance the enhancer and make it less simple so there, for now, it is. 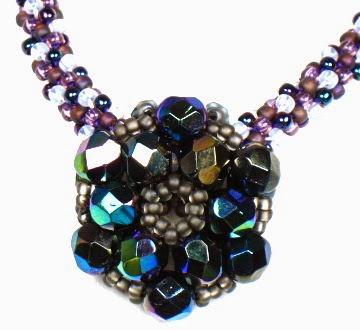 And then of course the sample for tomorrow's class. I rather like these bracelets as they work up pretty quickly. 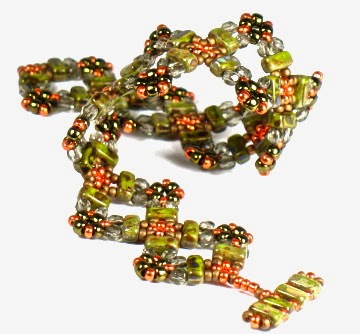 There's also been some reduction in the quantity of Extreme Cat Stress which is better than either alternative (no alteration or worse yet: an escalation).
Posted by Charlene at 9/01/2014 07:29:00 PM No comments: