Work, that is.
Long hours this week. No beading done, except teaching, which was FUN, as usual.
I knitted, and am on the downhill run on my cardigan, which is to say that the stitches are getting fewer. I'm knitting the yoke pieces to the sleeve caps and still shaping the front neck, a twofer in the decreasing stitches department.
I beaded this little shape a week or more ago, and only added the bail today. 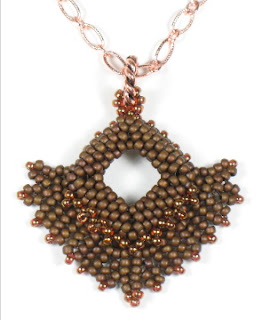 I think I like it, but I' not entirely certain, and if I do, I'd really like to do something in the component line (as in making a necklace or bracelet from a bunch of interconnected thingies), but not today.
I started an experiment which I think will work in spite of a mistake that's making it awkward, but this is what I have so far. 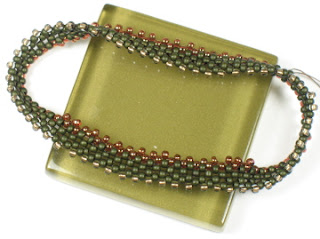 The tile is about two inches square.
And then this experiment:

I have one pattern on Craftsy so far.
Its main advantage is that customers get instant downloads, and don't have to wait for me to email the PDF, which means that if I'm unavailable you don't have to wait. I have no idea how well-travelled it is, hence the experimental nature of the venture.
And that's all for now, as I have an hour to work out and shower and dress before an out-of-town visitor arrives, and I'm thinking that something in the above list isn't getting done because (oh suddenly I had to mail and relist a pattern. Not on Craftsy - and wouldn't that have been freakishly fast - but on Etsy) now I have ten fewer minutes.
Posted by Charlene at 2/25/2012 10:24:00 AM No comments:

Still On The Edge (Having Not Fallen Off)

As I was getting dressed to go to Bead Society yesterday (it's not much like High Society; it's sparkly though) I realized I needed earrings to go with a recent weird necklace. 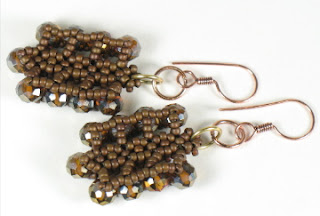 By the time I ate dinner, I was wearing them.
I also made a couple of beaded beads. 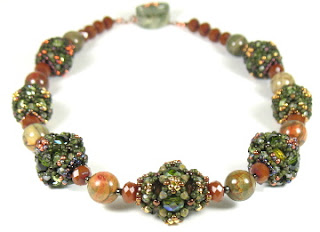 Today I finished the necklace.
On Friday I saw The Artist, which I wasn't terribly keen to see, but decided to anyway since it's been getting so much attention.
Yawn.
Too long, too predictable. I don't know what the fuss was about.
What is getting me excited though, are my vacation plans for a few months hence: I'm going behind the Iron Curtain.
Yes I know it no longer exists. Yes I know it never existed in any literal sense. Nonetheless in my previous life when I held a South African passport, I wasn't welcome too many places, and Eastern Europe in particular. That's in part why I have to go there.
I was introduced to Kafka the first time I went to Europe, as the guests at the youth hostels traded books relentlessly. You can only carry so many books for a three-month vacation. Yes, one needs books even on vacation, perhaps especially on vacation. I much preferred The Castle to another trade: The Amityville Horror, which was (predictably) pretty stupid. Even though Kafka hardly painted an appealing picture of his environs, perhaps because it was inaccessible to me it has always held a mysterious appeal.
Some mumble decades later, I finally get to travel there.
We (my kids and I. The attack cats and the cat sitter will be guarding the house) will be going to Krakow, Prague, Budapest (yay! Hungarian beaders! I need to find Hungarian bead shops), Dubrovnic and perhaps somewhere else in Croatia, though I haven't decided exactly where.
The last real vacation we took (as opposed to visiting family in Australia which is like a vacation in many ways, and yet not entirely) was when we went to Spain and France in 2003, the summer that people were dying of heat stroke and we had a car (not to mention hotel rooms) without air conditioning. No really, it was a lot of fun!
This time the kids are older and aren't such picky eaters and are more interested in the totality of the experience, which I think will make it more fun for all of us. I think we'll have a blast.
I'm psyched.
Posted by Charlene at 2/19/2012 11:07:00 PM 1 comment:

Need to make sure that my instructions for Tuesday's class work, as it's filling up fast. 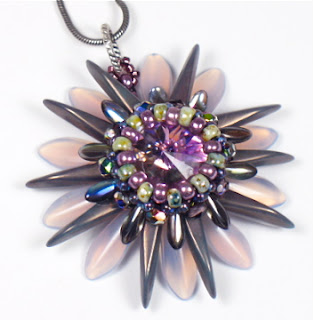 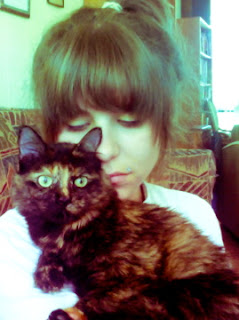 Alternately a picture of my daughter somewhat masked by the cat. When I remarked upon receiving it that the picture was awfully green, she cheerfully said, "Oh yes, I used green and red filters because the colour was too dull", which makes me wish I was a comic book character so I could have a thought bubble containing the following three characters:
???
She knows more about photography than I do, which is good and proper since she plans on making her living thereby.
On to me and my travails with beads.
I bought one of these when I saw my local bead store had them. Recently. 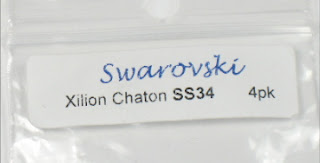 Xilion Chatons SS34? They're teeny-tiny rivolis, and I desperately wanted to make a gaudy and delicate Something with them. I started as soon as I got in from work on Friday, continued all day yesterday (with a break for "Race" by David Mamet, highly recommended) and all day today until I finally had something that didn't need cutting up.
It wasn't this. 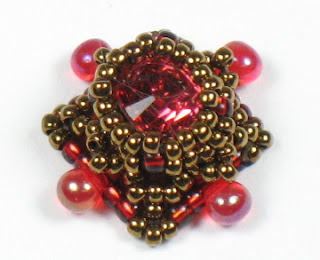 The thing I needed to make had to be something approximately like this, but not so square and, well, cheesy. I made about seven variations, none of which survived long enough to be immortalised via the magic medium of digital photography.
I thought I might be barking up the wrong tree, so I took a left-hand turn. 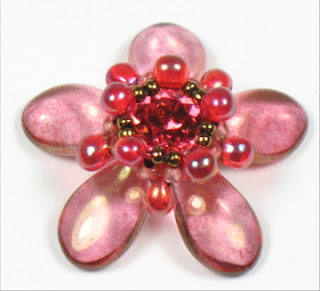 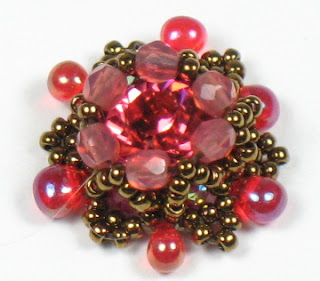 Then I got vey close, so I pushed on until I had these: 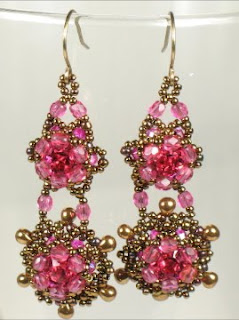 In some small part of my brain I thought I'd make a delicate chain with exquisite little beaded thingies sprinkled hither and yon, but I only had four of these chatons (see the picture of the packaging above), so earrings it was. 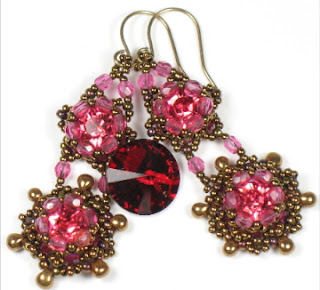 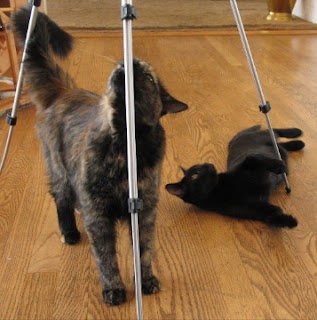 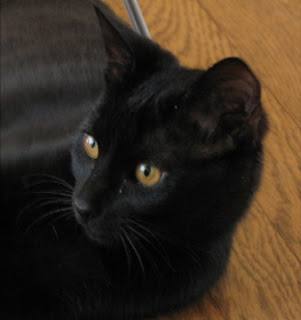 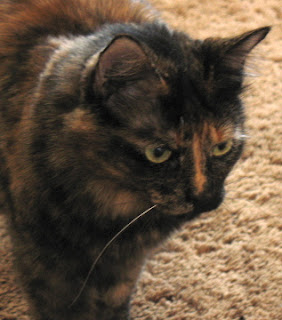 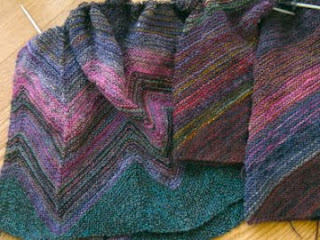 My green cardigan turned out so well (although it has some minor issues) and was such an excellent way of using up scraps that I decided to do it again, only slightly differently: this time I'll be making set-in sleeves, knitted-in, as well as a (perhaps) ruffled shawl collar.
The configuration of the zig-zags is also slightly different: on the green cardigan a pocket could very naturally have been inserted but in this instance, not so much because it zigs when it should zag so the pocket opening would be perpendicular to the row, rather than along the row.
For both the sleeves and the body, I used a single colour for all the set-up, as I though the contrast between that beginning block of colour and the rest of the impressionistic blurring might work well. I think I like it.
I've really been enjoying playing with colour here. I change colours on the wrong-side rows, so that the visible garter stitch bumps are an amalgam of two yarns, while the ridges on the inside are just stripes, which I really don't like as much. If I had some sort of repeating stripe pattern, I think the solid ridges would work, but for colour-blending, I much prefer the mixing.
The picture seems to make differences starker, but in real life there's a dreamy movement from one colour to the next which I'm really liking. I had very small amounts of most of the yarns I've used, but by picking the pairs (I'm always working with two yarns at a time, alternating pairs of rows) carefully, I can get the effect of other pairs so that all parts of the knitting look like the same item, rather than random bits of yarn thrown together, like some of the colour-blocking I've seen.
In case you're interested or curious or confused, the picture shows the body of the cardigan up to the armholes, and two partial sleeves on the right.
Posted by Charlene at 2/11/2012 11:08:00 AM 3 comments:

It's late and I have a headache and a tiny backlog of pictures, now no more: 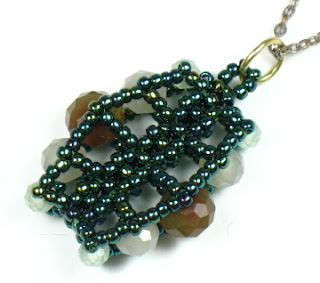 Last week I made rectangular versions of this and wanted to try shaping . It looks somewhat insectoid to me. 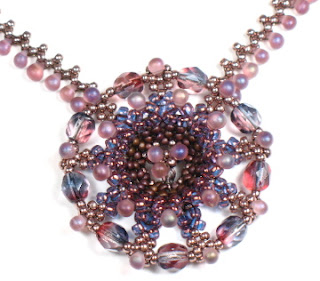 I cleared one thing out of the Unfinished Bag (which has things I think I really am highly likely to finish Any Minute Now, as opposed to the Unfinished Drawers, the contents of which I'm more realistic) which had been waiting on the other half of the necklace since last year or perhaps the year before, but who's counting. While I was there, I decided I didn't even like the focal that much, so I added More Stuff to it, and now I think it's halfway decent, perhaps 65% even. 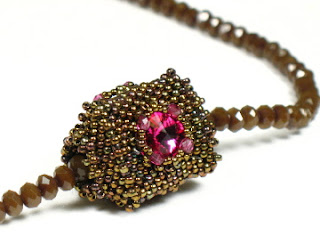 This has been forever in the making.
Actual stitching wasn't that bad, but I'll bet that if I went on an archaeological dig of my piles of sketches, I'd find versions of this stretching back to the dark ages (whenever those might be. Some time back, for sure).
There was a minor amount of Cutting Up, but not bad considering.
I think it's a little plain. Some gussying up might be in order.
Not now though.
Posted by Charlene at 2/09/2012 11:03:00 PM No comments:

I thought it might be fun to capture a very large faceted rondelle in seed beads. 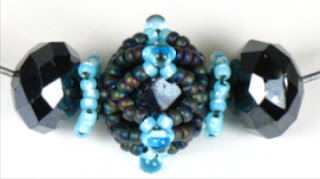 Then I thought it might be fun to use smaller seed beads. 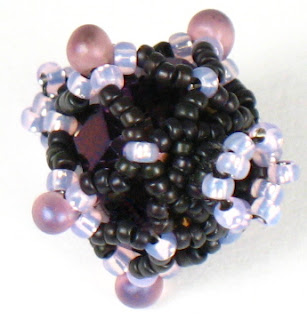 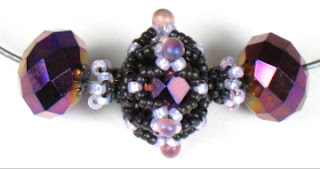 So I did it again. 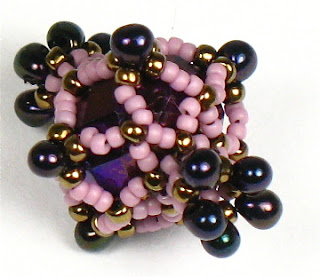