Percolation from the idea to its realisation wasn't done yesterday and it might not be done today but even though I've moved away from the original idea, I think it's been improved. 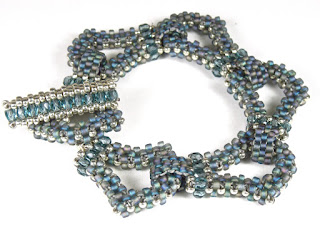 My colour choice may not be ideal because the fire-polished beads don't add as much interest as I'd intended, but the shape of each link pleases me more, and because of they way each link connects to the next, the chain as a whole is much more fluid. Bendy. This one will absolutely hang properly as a longish necklace without any alteration except obviously in the number of links.

If you move among people who make things out of yarn or beads or some other non-perishables, the kind of people who buy supplies so that they're on hand when inspiration strikes you'll hear talk of items in the stash raging until they're ready to be used.

Design ideas are like that too although in my case no matter how long they've aged, when they're finally constructed I often realise that what I had envisioned was only the first iteration. Sometimes the imagination glosses over reality, doesn't always see a better way, a more interesting join, a more attractive use of beads and so on.

Still, I'm not entirely unhappy with my first pass of links chained one to the next. 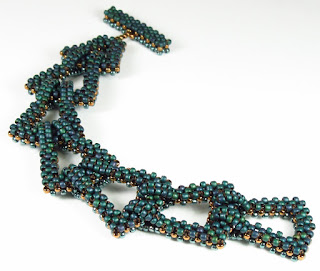 Until I started gathering the beads, I hadn't thought about making it reversible. 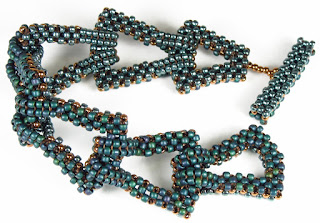 Once I'd stitched a couple of links, the toggle seemed way too dull.

Once I started planning a more interesting closure, I thought of another way to connect them.

I'm glad I persevered and didn't just switch to the next idea without completing this one as I could have ended up with a few odd links that neither matched nor formed a complete anything.

Cubic right angle weave is naturally a bit stretchy if you don't stiffen it, so it's possible to make a snug bracelet that's not impossible to fasten. The chain has a moderate amount of overall flexibility so it would work well for a shortish necklace, but a long necklace wouldn't naturally hang neatly - more design possibilities!
Posted by Charlene at 11/25/2017 10:26:00 PM No comments:

Turns out I've been beading more than I thought; I just hadn't taken pictures and you know how it goes: if there's no picture then it didn't happen. 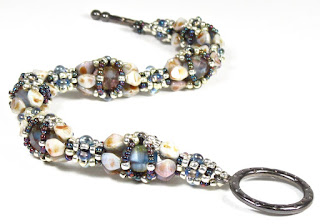 I seem to have a weakness for fire-polished rondelle beads as they conspire to force me to buy them. I mean, they come in colours never found in the regular beads; they are surely conspiring to remove all self-restraint.

So it's a good thing when I figure out how to use them, though in truth I'll need to make necklaces rather than bracelets since they're used somewhat sparingly at the rate of one per inch. 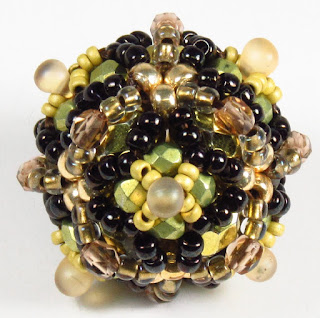 This is a beaded bead I made ages ago which in its first iteration reminded me of the Death Star but above here: not so much. I always enjoy how a beaded bead based on a cube in terms of its bone structure can be filled out and primped and padded to look more round.

This rush of newness is all leading up to the next batch of classes at my local bead store.

I think I may not have done much beading for a while because all I have to show you is a necklace version of the last new thing I made which is once again, an idea in progress. And I'm gathering colours to make another one so I might be stuck, but not in a way that makes me unhappy. So. 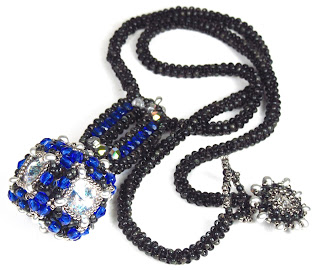 The cube beaded bead is the same as the pale green one from last time and I had this idea of making some sort of huge circular bail as a design element but then I didn't have enough small blue beads and so it became this weird oval thing and then once it was there I needed to figure out a necklace (I knew exactly how to make the necklace from my planned bail) and so it grew.

I don't think the clasp goes well with the necklace, stylistically, even though it uses the same beads.

A rediscovered pleasure though is the actual necklace chain: the narrowest tubular peyote rope ever. It's fluid and has a pleasing structure which reminds me of a box chain, though rounded instead of squared, and even with my pretty tight tension it looks somewhat loose and is crazy stretchy.

What I don't love is that it feels incredibly slow to stitch but you know: seed beads.

Also: matte jet picasso seed beads which read black but have organic colour variations which make them so much more interesting.

What I've been doing a lot of is knitting on an endless project on 2.75mm needles and no, it's not socks (I use smaller endless for those and they are relatively quick actually).

This is a moss stitch sweater using up odds and ends of somewhat fine handspan luxury fiber yarns in natural colours. Randomish blocks of colour with the deeper colours towards the bottom and the lighter towards the top.

So far all I have is one and a half sleeves and an underarm panel and I'm not feeling especially impatient, probably because I know how futile that would be, and also because the particulars of the end product are not quite completely decided. Yes, I know I said it's a sweater but the neckline for example isn't completely fixed in my mind, nor the hem as it turns out.

I should probably show you but I'm always very dissatisfied with my inability to photograph knitting such that it looks amazing and this is just swathes of brown moss stitch so it's not as though my photos will dazzle with scintillating colour or extraordinary stitch construction or anything. 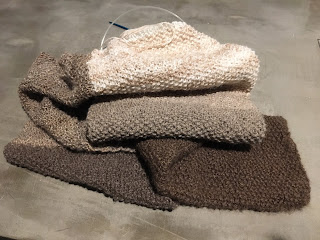 I told you. Brown knitting.