When I tiled the floor of my family room and hurt my hands so badly that driving for more than fifteen minutes was painful, knitting for any amount of time even more so, I had to have something to keep my fingers moving. I'd been knitting since my age was in the single digits, all the time, all over the world, while in a plane or watching TV or waiting for the dentist or even a long traffic light.

If I couldn't knit, I had to have something like it, something portable and soothing and rhythmic and the closest and least painful thing I could find was beaded kumihimo.

I started with size 8 seed beads and while the way it chewed through my stash of seed beads, it yielded a ridiculous quantity of necklaces, and so after a couple of months I switched to size 11s which was only slightly better in terms of the volume of production.

I played with different shapes and sizes of beads, colour combinations, counted stringing patterns and some of it was fun but ultimately it started to bore me. Quite a bit. And stitching the ends, finishing the necklaces became even more tedious so I began to let it slide.

And then I guess I killed enough nerves in my hand because I've been knitting again for a year or so and I do have to limit myself because even though I can often manage three or more hours in a single day, if I try to sustain it I pay the price in pain. Sometimes when I hurt I consider making a kumihimo necklace or two - it's not as though I've run out of ideas, it's just that the ideas no longer have any urgency.

it was always a stopgap for knitting. 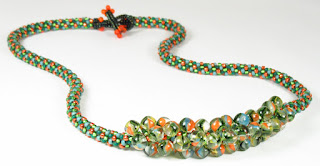 When I get around to stitching the clasps I'm pleased or perhaps relieved and I often like the necklaces, but still, I'd rather knit. Either way, another beaded kumihimo necklace for Amy's sale this  Saturday! 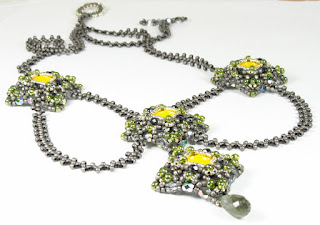 I also finally joined the components in the necklace and finished the chain that goes around the neck. This is where the earrings I made over the weekend come from. 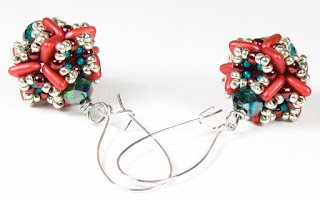 And I made a couple of pairs of earrings. 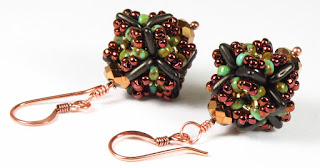 Really, one can't have too many earrings. It must be true, because no matter how many pairs I make for myself, at least once a week my selection of earrings is found lacking. These aren't for me though.
Posted by Charlene at 10/25/2017 09:46:00 PM No comments:

Weaver extraordinaire Amy (@amyfibre on Instagram) is having her annual show and sale next weekend, but due to the vagaries of zoning regulations as it pertains to kitchen renovations, her house isn't quite up to hosting the sale as usual, and so I offered mine.

Among other things this means that I'm not as constrained in terms of quantity what I display for sale so in theory all those half-finished pieces clogging my drawers and bins and baggies could be worked to completion, priced and put out there and I've honestly thought about doing it for a few weeks now but you know, what's it they say about paths being paved with intentions?

Actually I made pretty decent inroads (if you define "decent" as the percentage of unfinished versus finished being greater than zero; perhaps even approaching one) into some of those poor, partly-formed agglomerations of beads. 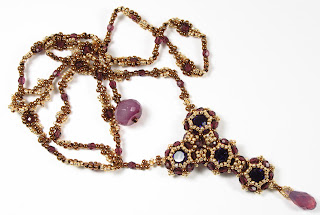 I finally finished stitching the necklace chain on this sweet little cluster of chatons. 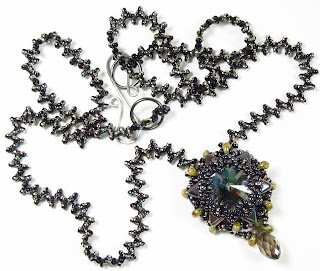 I stitched the second half of this necklace chain. It didn't even take an hour. I'm not sure why I put it off for so long (probably a year or more). 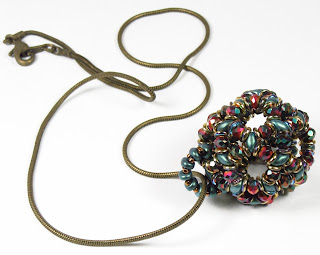 I stitched a bail and found a suitable chain for this shiny shiny dodecahedron. 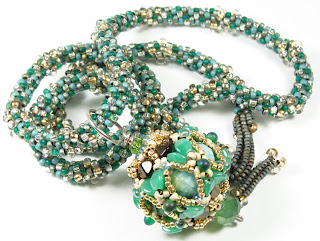 I both added a bail to this beaded bead so that it could be a pendant on the kumihimo rope and also stitched the clasp and let me tell you that's where the smug started settling in and the discipline started dissipating and I started taking detours into what-if.

Not that it's entirely a bad thing because it's not as though all further efforts led to wasted time and piles of nothing but thread pieces: I was productive and I completed things.

It all started with a necklace which was going to be a class sample for Bead & Button 2017 but then I had plenty of colour-ways so I just didn't quite finish it. It's close though - just an hour or maybe two of stitching the necklace chain to join components. I gathered the materials and prepared to stitch and that's when I noticed that there were two more rivolis and so naturally my thoughts turned to earrings. 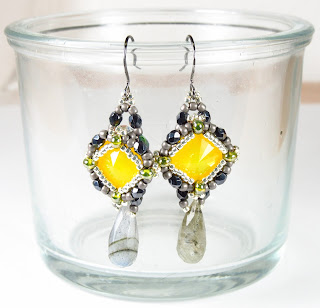 See? Complete! (The necklace is still in pieces though).

On Friday at work I had an interaction somewhere between a discussion and an argument; I tend towards "argument" when people who have no idea tell me about things that I'm closer to than they are: specifically that all necklaces are two-dimensional and that while women may make beaded jewellery, it's men only who make fine jewellery. If I cared more, it may well have turned into an argument but after not a whole lot more than "you're wrong" I began to find running another test case far more interesting and I'm not actually joking. I mean why waste time caring about the opinion of someone who's no more than a work acquaintance whom I generally try to avoid?

So the way the earring components are constructed draws my focus towards beaded beads with an insistence that cannot be resisted. Each component is built on a base with eight beads which means I'm looking at a solid with four-sided faces: a cube. 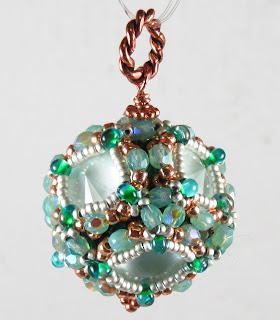 If I hadn't found six rivolis the same colour immediately I might have had time to reconsider my original plans (to FINISH STUFF) but it turns out that one vendor calls these "Pastel green" and the other calls them "Powder green" and so I ordered both Pastel green and powder green and didn't realise that they're exactly the same colour until a few hours ago so there you are.

It's not hideous to stitch (sometimes they are), each motif didn't distort when I joined one to the other, the bead holes didn't fill with thread instantly due to convoluted thread paths and even though it's not perfect and I have Thoughts regarding Improvements, it's not bad for a first prototype.

And it's a pendant (which means necklace, doesn't it) and Hello! It's three-dimensional.

Not Quite According to Plan

But actually I don't mind.

I had a plan which involved cubes made using cubic right angle weave and at least that is what I ended up with.