I spent a long weekend in Wisconsin so I made little gifts: tissue holders for the upcoming sniffle season and eco wraps (beeswax-saturated cotton as a substitute for plastic wrap or wax paper). 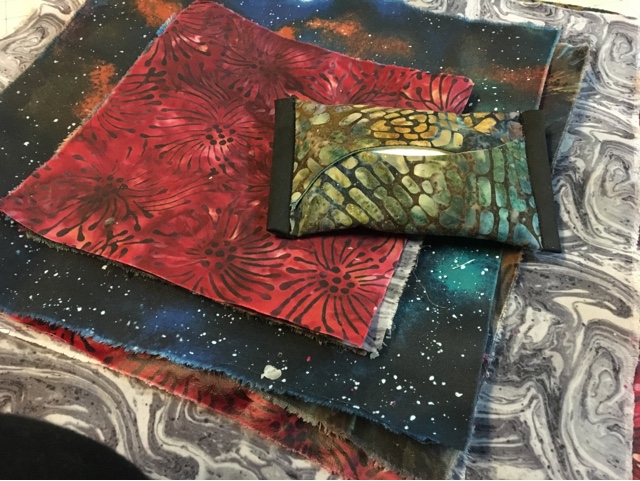 Deb has a wonderful studio with areas for different media and plenty of work surfaces.
She was clearing out odds and ends and I managed to snag a bunch of silk yarn 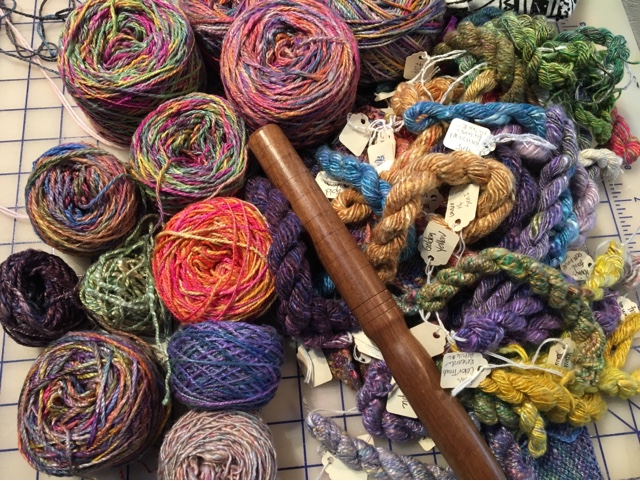 Which is turning into knitting. Yes it hurts my hands but they're messed up and will continue to degrade no matter what and I'm tired of being constrained so I'm doing it anyway. 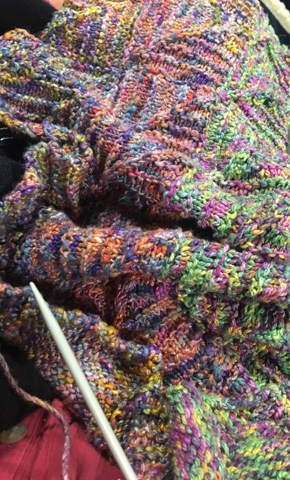 I dyed some rather insipid silk noil fabric. 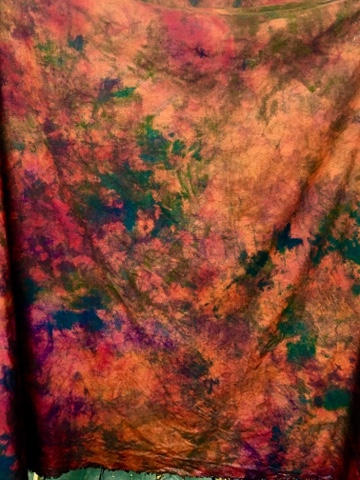 Deb was working on an embroidery piece which was well-started when we arrived but really took flight while we were there. Can't wait to see how it ends up 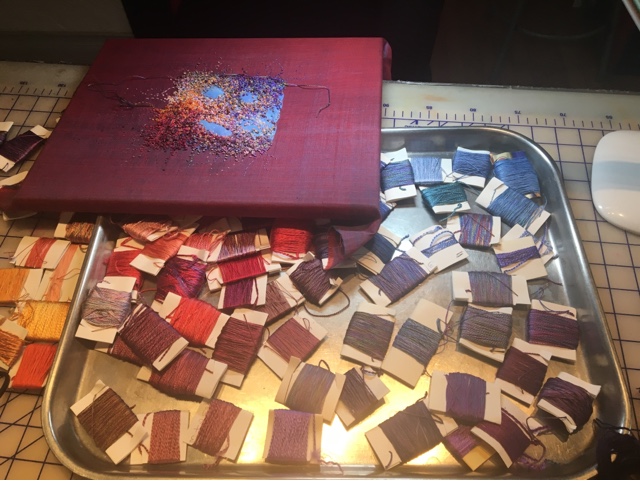 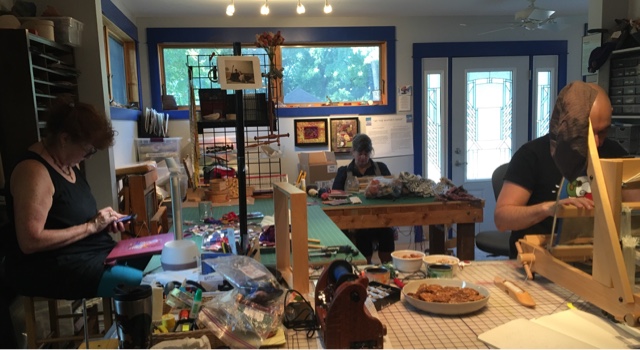 All that I managed to photograph were a couple of knotted pile pieces partially hidden by one of Deb's embroidery pieces that Sara will use in a bag (what else?) 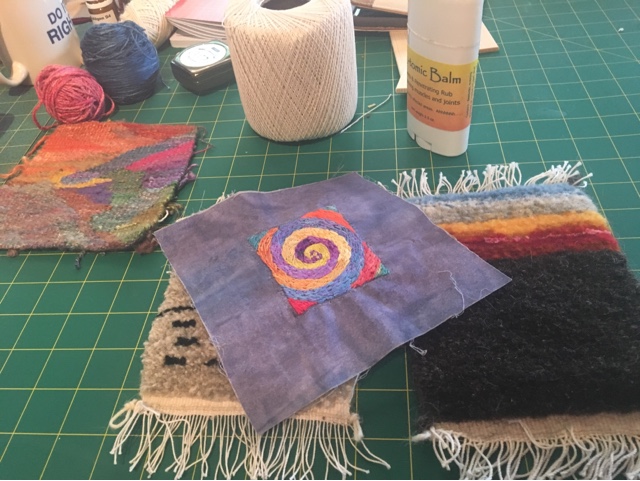 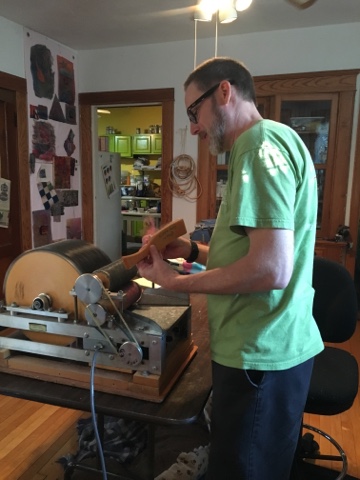 Which resulted in bundles of yum 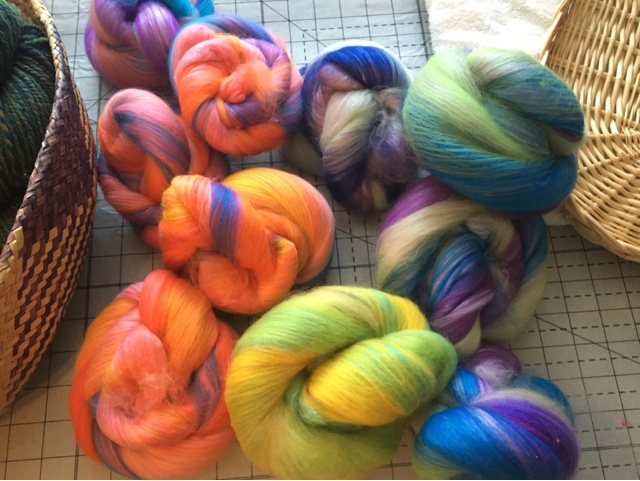 And we ate well, had great discussions, took inspiration and bounced ideas off each other. For me it was a perfect immersion in things that I love away from the schedules and chores of the day-to-day.
Then I came home and made a velvet cushion cover for the bench at the foot of my bed. 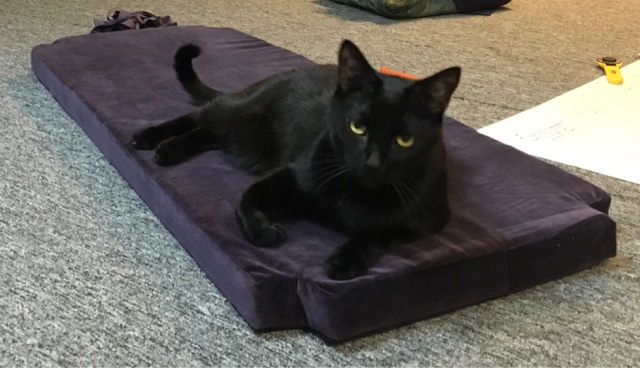 The Right Tool for the Job

Years ago I used to sew about ninety percent of my clothes but then I realised that even though I was generally saving money and getting clothes I wanted that I couldn't really find and that fitted me well, there was only so much free time and I'd rather spend it doing something I really enjoyed, like knitting or spinning, so I cut down a bit.

The past decade or so I have made about half a dozen garments a year, plus home sewing: cushion covers, roman shades, that sort of thing. Practical stuff. Simple stuff.

Like recovering an ottoman. I've found that I like to sew the rectangular cover to fit the foam cushion, and then when I staple the fabric to the underneath it's both easier and neater. My staple gun stopped working when I was almost done yesterday and when I went to buy a new one I discovered that the heavy duty one I'd been using was overkill so I replaced it with a light duty staple gun with the added benefit of being easier on my hands.

Long weekends are good (for me) for tackling odious things which I put off feeling that they'll take forever when in fact they're actually not that bad. Like culling the fabric stash of cuts I now hate, significantly-sized scraps which I've learned pill horribly, that sort of thing. I have a large bag at the foot of the stairs, awaiting a decision as to when I'll drop it off at Goodwill (these are big cuts. Surely someone will pounce on them? I know I would).

So there's this skirt that Pinterest (I know, I know!) told me about known as the Tablecloth skirt. Looked like fun, wondered if it would work, found a length of fabric in the stash that wasn't quite big enough so I dug through the Goodwill pile and found something coordinating for a dress using the Tablecloth skirt idea just to see if it would work.

I think it will and I think I'll even wear it tomorrow and I know it'll be perfect when we go to Hawaii in a couple of months.

Back when I used to sew I splurged on some odd tools and my sewing machine came with a couple of (you'd think) slightly esoteric feet that I barely use but man! When you want a rolled hem because you have about twelve feet that would be super-irksome to have to eyeball (who measures?) and pin and then sew, the rolled hem foot is magic! 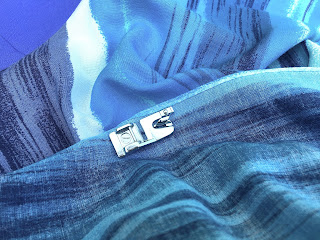 And the bias tape maker I bought in four sizes isn't too shabby either. 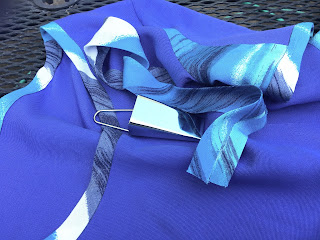 The fabric scraps from this dress are literally enough to make one patch pocket, no ways was I getting a neck facing from this but because of the way I cut the skirt of the dress, I was able to spare a couple of two-and-a-half-inch-wide strips on the diagonal.

So even though I'm attempting to cull and reduce all over the place, apparently I'm not immune to acquiring ridiculous things.

The company for which I work makes radiation oncology software and I guess they have in the past shipped and reshipped stuff to various client sites for demos and whatnot and my office is also in a massive junk-reduction drive so they decided to get rid of the cases which they used to ship their equipment and I had a Thought and brought one home with me. 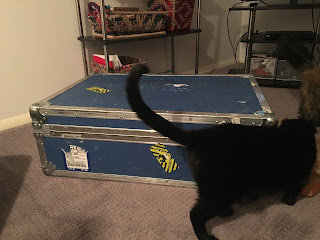 First of all it's a hideous shade of blue and I'm a little afraid that any paint I choose will peel right off that ghastly blue plastic so I'm gong to be very careful about primer, not to mention the adhesive residue from the scads of stickers all over it.

The metal is rather banged up so I'm going to try to give it a brushed finish. I need to figure out what tool I'll use because I'll tell you right now it won't be steel wool and arm power.

So, my plan: clean it and paint it and clean out and line the inside (it's filled with custom-moulded foam) and attach metal industrial-looking wheels (already acquired) to the bottom and it'll be The Coolest Rolling Storage Coffee Table Ever.

And on this day twenty-four years ago I successfully made one of these with all natural ingredients and no tools - wait, there was a tool that I have since discarded... 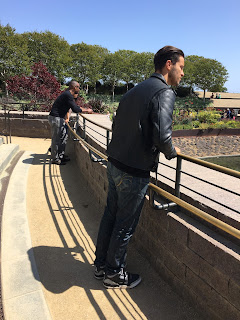