I like working with black metal pipes (I made two lamps last year) but when you get them, they are very oily and dirty and need severe washing before you can use them. 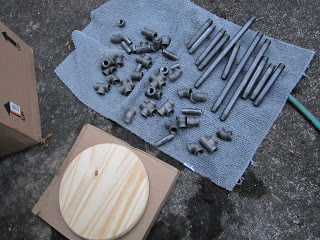 At the point that this picture was taken, I was pretty excited and convinced I'd have one stool within a short time, but then stuff didn't work exactly right and I was missing a piece or two and so I unscrewed almost everything (and now two of the close nipples - yes, that's what they're called - won't come out of the forty-five degree elbows. I suspect they weren't quite dry when I put them all together and now they're rusted together.

This is not ultimately a tragedy.

Part of my kitchen plans involve replacing the extremely ugly formica legs of my bar/counter thing with legs made from pipe. 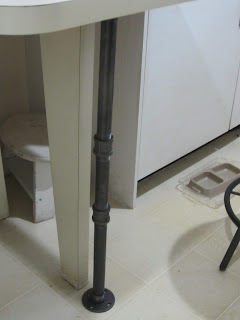 It's a lovely plan except for my ability to measure perfectly accurately. 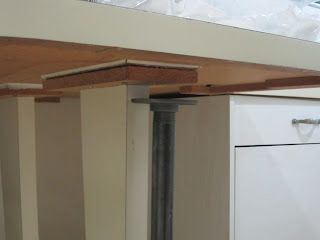 In all fairness, it's hard to judge how much of the nipples (really, that's what they're called: the bits of straight pipe with threaded ends) will disappear into the fittings into which they're screwed. Short answer: some.

And then I made a sample for Tuesday's class and learned just how horribly sensitive this design is to minuscule variations in seed bead sizes. And fire-polished bead sizes too. When they call it a three-millimetre bead, they really mean "more or less, randomly". 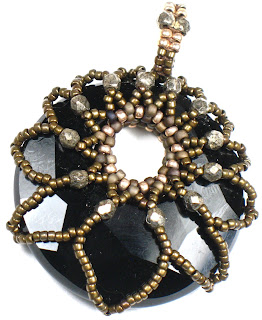 I don't think it's bad, it's just not the perfect glove-like fit of my original class samples.

The Next Big Project

I may well be over-confident, over-optimistic, over-<adjective of choice>

I will be developing my extremely poor woodworking skills (so far, not so bad) and jumping headlong into things about which all I know comes from the intertubes and my (possibly misplaced) assumption that really it can't be that hard.

So my kitchen is small and very much hearkens back to the nineties when the previous owner did what they did, and it's certainly served me well enough, but it's time for it to look as though it might want to belong to the twenty-first century and this project is something of a facelift: cosmetic surgery to be quite clear. I'm not moving load-bearing walls or removing the soffits (which I really want to as the kitchen could certainly do with more storage and besides I think soffits are an excuse for small cabinets, but that's outside the current scope) or installing a new sink even, but I'm fairly confident that I've taken on something that is doable by me, albeit more difficult and/or fraught with surprises than I'd like.

I'm also pretty certain that I'll be obnoxiously impressed with myself when it's done. And it will get done.

Part One: Trashcan in a cabinet.

But there's no available cabinet, so I bought a narrow unfinished oak cabinet from my local big box hardware store whose initials are HD, removed the existing drawer front and door because they don't match my existing cabinets (completely plain, no frou-frou moulding or raised bits or sunken bits; none of that nonsense) and had new fronts cut.

Then I made a frame which coincidentally is exactly the right size to hold a standard smallish rectangular trashcan. Getting it square stretched my practically non-existent woodworking skills and power tool supply (the yellow cordless drill my work gave me on my five-year anniversary with them. It's been incredibly useful, and a random orbital sander I bought when I was in the throes of my last attempts at woodworking sometime last winter). 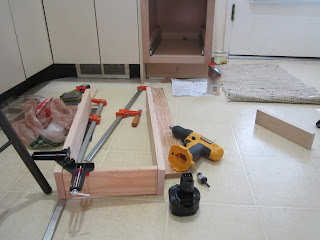 The place where my skills seem to be lacking the most is in the measuring and accuracy department.

Also if I could have shrunk myself about fifty percent that would have been super useful because fifteen inches (which was probably closer to thirteen or fourteen inches inside the cabinet) is pretty tight for head, arms, drill, ruler and all that and being that my eyes belong to a woman of a certain age, being able to see the pencil marks from three inches away proved somewhat problematic, even apart from the technical difficulties imposed by the materials with which I've been working.

The inside of the cabinet is laminate which apart from being ugly (but mostly I don't care because it's not as though I plan on leaving it open) is also hard and slippery and when you try to drill holes for the screws the drill bit moves and then the pieces of wood for the drawer slides aren't exactly where you want them to be. 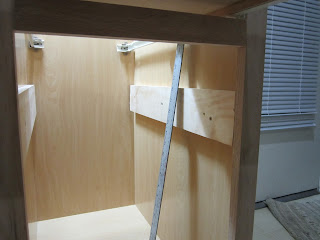 Eventually they were though.

And then I could reattach the bit that would have been the door if only I hadn't replaced it. That was another challenge because the best way to mark the correspondence between the frame holding the trashcan and the drawer front would have been when it was closed, but that has logistical issues caused by the fact that the pencil and I were outside the cabinet when it was closed, and given that I was unable to shrink myself by fifty percent (although seventy-five might have been more convenient, assuming I could maintain one hundred percent of my barely useful strength) or in any other way subvert the laws of the physical world, I had to get creative.

I put blobs of lipstick on the frame, closed it, aligned the front piece with the cabinet as best I was able and then pushed firmly against the trashcan frame and achieved a modicum of success. 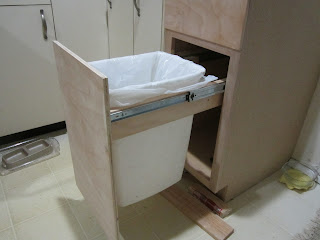 Amazingly, I had two cabinet handles left over from when I replaced the original acrylic handles with what I'm currently using (and don't actually plan on replacing, most likely). 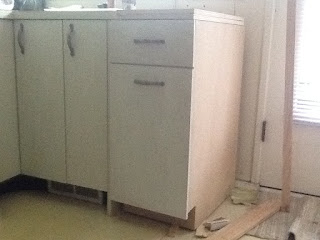 The top will be a cutting board as I'm not going to be able to extend the current counter-top; nor am I willing to buy or make a new one. It still needs an edging to make it neater, and to be attached to the cabinet but first I might need to refinish the wall behind it before attaching it.

Oh yes, and I really should trim the trashcan drawer front to be the same size as the neighbouring door.

And add a proper toe-kick (I think that's what those are called).

I did increase my power tool collection by fifty percent with the acquisition of a little jig saw AND I LOVE IT. I looked at it for a few days because I was a little afraid to try to use it in case I messed up very badly but it turns out I'm actually not half bad at it. My house will now become filled with very small pieces of things as I wander around cutting up stuff. (Not really).

On the beading front I made the last of the class samples for the four month class schedule beginning in October at Lady Bug Beads. I tried very hard to veer away from my monochromatic bent and in fact this pendant has blue, green, red, purple and silver beads but it still looks kind of monochromatic anyway.

I don't hate it though. 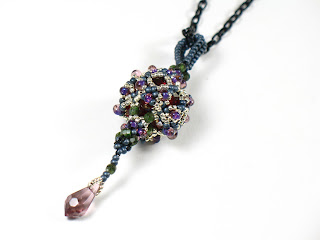 And then I made another lariat in the same vein. I had thought I might keep it for myself but maybe not. 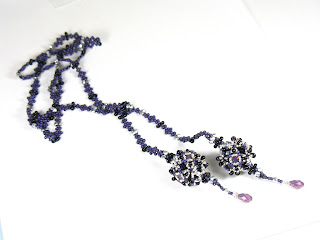 And then I made a lariat for Anne for her birthday on Thursday. 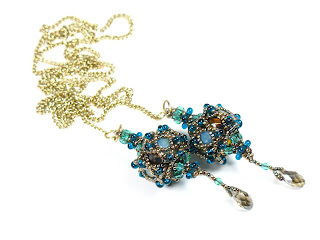 I also worked around with a new chain that's vaguely interesting as a singleton but better when combined to make a wider strip.

It looks a bit like railroad tracks, doesn't it? 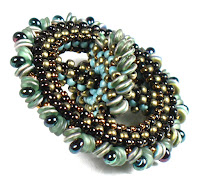 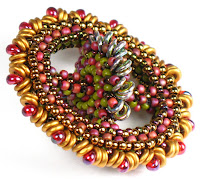 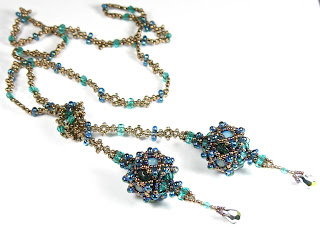 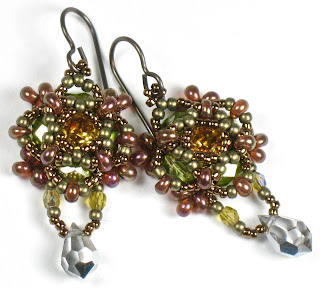 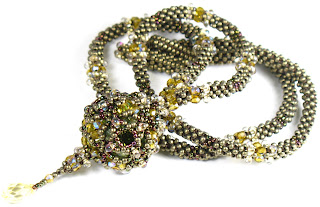 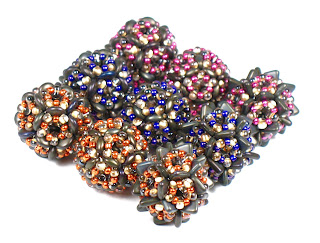 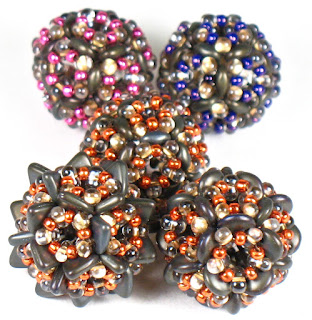 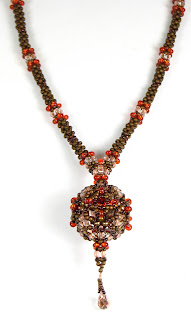