Some years ago I made a pendant with matching earrings, scaling them down by using smaller fire-polished beads and omitting the rivoli which was in the pendant. I sort of like it but I think it could stand improvement so that's where I started.

I used the smaller fire-polished beads to weave a square frame, embellished it and inserted a smallish rivoli. Different embellishment than the last time and I was enjoying the making so I kept adding sides until I had a large, square slider. 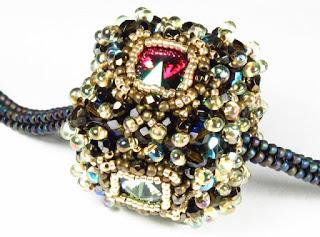 The sides measure about an inch and three quarters I think. It's pretty big.

Also? I don't like the embellishment so much. Too disorganised looking; not enough structure, just a mess of shiny magatamas, so I decided to revert to something closer to the original and make only one face before deciding whether I like it or not. 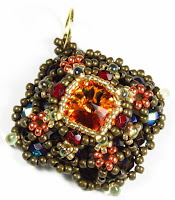 Too dull. I hate those orange circles with holes and while I like some of the changes, it's too plain.  Not enough magatamas. 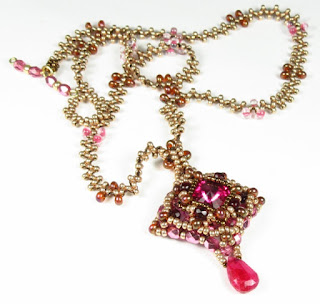 Good enough to make into a necklace for a friend's birthday in just over a week. (She doesn't read this blog so my secret is safe I think).

And Then It Was Over

Bead and Button, that is.

Pretty good schedule with not too much free time between classes.

Uneventful drive there and back.

So a nice big Bloody Mary, but instead of say, a stick of celery poking up through the surface of the drink, the glass was festooned with a piece of spare rib with barbecue sauce, a bird made of pickle slices and cherry tomatoes and I'm sure there was more but my mind was so blown that I couldn't take it in.

I mean, how does it work? You can't sip the drink because there's meat and pickles in the way but you don't get a plate for the food or even a fork with which to spear it and hold it away from the drinking part of the game and I ... just don't quite get it.

Apparently it's a Thing in at least Milwaukee and Chicago and a week later I have my words back but I'm still flummoxed, appalled and fascinated in equal measure.

So between teaching I stitched samples: 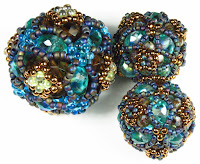 So the beaded bead kit wasn't the most popular at Meet the Teachers but I still like those colours. 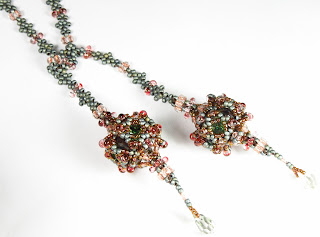 I sold almost all of the lariats with just a couple in this colour-way left over.

I didn't have time to stitch an entire necklace but I did manage the one motif to show the colour-way.

I've barely unpacked but I've almost finished a new project which is only sort of new so I'm not exactly sure how I feel about it. 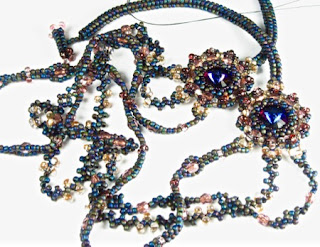 The rivoli components are not new, one of the chains is from another project and I think it has nothing in it that's strange or complicated or clever but I think it'll be quite pretty.