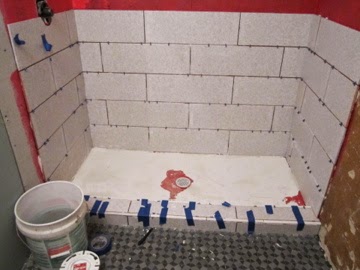 So they started tiling the wall and that's OK except I'd wanted the tiles longwise vertically and not horizontally but I guess I can live with the horizontal.

I mean, the whole reason I chose the same tile for the bathroom floor as for the shower floor (which I guess they're putting in after they've done the walls) is that I wanted a smooth unbroken expanse (a very small expanse since it's a minuscule bathroom) of ALL THE SAME TILE. Like up and over the lip of the shower (which if you'll recall I wasn't too keen on either but that seemed to be an endemically losing battle which wasn't worth fighting) but I pretty much hate the pale wall tiles forming a nasty barrier between the two floors.

At the very least I dislike it exceedingly.

And since they're already running two days late, if I ask them to do it over it's going to be even later which is going to make me even unhappier so I suppose I'll have to suck it up but I'm.

They've certainly failed the Following Instructions portion of the test, in addition to the Take Initiative portion. :-(

On the plus side, I called them this morning to explain how distressed I was. After some discussion, they found a solution which works for me and for them, so I think I'm satisfied. I just hope it doesn't push the completion date out too much further...