I've made different choices in terms of how to live my life than my mother has.

Some years ago when I was in a relationship, we were friendly with a couple. The two couples had some interests in common and they were fun to spend time with but we differed in some of our fundamental beliefs which for me meant that I'd never be really close to them. Pleasant to hang with but not much more than that.

The relationship ended, and all of a sudden I was relegated to girls' nights out with the wife of the couple (my less favourite) and clearly prohibited from gender-neutral activities with both of them. I wasn't much interested in this new mode of acquaintance.

Then they spectacularly let me down in very important (to me) but seemingly small ways which belied their earnest proclamations of being deeply close and feeling connected, so I chose to let them go in the same breath as the terminated relationship, and I have to say that I feel no regret and don't miss them at all. Spending time with the wife alone would have bordered on the tedious and I chose to forego that annoyance.

Conversely my mother would complain about having to spend time with a couple she didn't care for, so much so that she'd ensure that a mutual friend would also be present to mitigate their company. When I'd ask why she was having them to dinner, she'd reply that she owed them because they'd had her to dinner. I'd ask why she went to dinner with people she didn't like, and she'd say "Because they asked me", seemingly uncomprehending of the possibility of saying no simply because she didn't want to go and didn't want to spend time with them.

I'd feel very smug at removing social obligations I didn't care for.

In general I try to spend time (outside work) only with people I like to be around as far as possible and have no qualms about turning down invitations if I don't care for another invitee or don't care for the activity or anything else that would weight the experience in favour of the negatives rather than the positives.

There are things one does to take care of one's own life that really one would rather not, but one does anyway because not doing so would preclude things like clean underwear, or avoiding being thrown in jail by the IRS or being evicted from one's home and I accept that those things are the price of being able to make other choices in my life, but most of the time I don't do these things any more than I absolutely have to.

Yesterday I spent the afternoon doing one of my least favourite things: packing, and it wasn't even my stuff (which would be bad enough).

A friend is gravely ill, the measure of her life expectancy in days and her family is due to close on a new house this week. The move could probably be delayed due to the dire state of her health, but she's set on knowing that her family will be settled after she's gone, so everyone is lending a hand to make it happen while her husband and children attend to her.

She's a lampworker with what has been a thriving part-time jewellery business (like so many of us she had a day job too) and her studio is extremely well-stocked and also somewhat messy and disorganized.

A few weeks ago we packed up most of her inventory that she takes to shows - she's been in almost all the art shows, festivals, flea markets and so on in the area and her sales go gangbusters, so this resulted in a great many very large, heavy boxes. At that time she was still at home and her prognosis was measured in months.

Yesterday we packed up what was left of the studio: kilns, jewellery projects in progress, odd supplies, stringer, glass, tools, containers, beads, while medical professionals monitored her to try to keep her stable.

The new house has studio space, but none of what we packed up will ever be unpacked there. We spent the afternoon packing up her heart and blood, but it'll never agin run through her veins and the next time those boxes are opened it will be to figure out how to dispose of it all.

So I spent some hours doing something I really don't enjoy for reasons which have more to do with doing the right thing than anything else, and all I feel is heartbroken because of the underlying reason.

And if she's able to hold on until the family moves into the new house, I'll probably be there at the other end, not unpacking her studio but all the same doing something I really don't want to be doing even though there will be nothing about it which will make me feel good and even though I suspect I will have no contact with her family after she's gone.

It pretty much sucks. 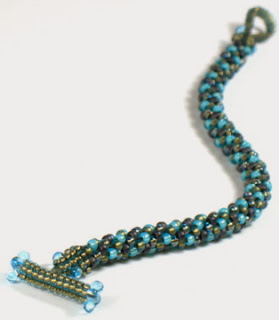 I finished a class sample anyway. 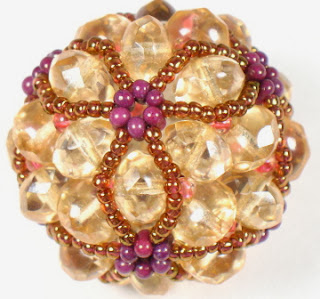 I also worked on what I think is Version Not-Final of a huge beaded bead inspired by a picture on another blog of something which at this point looks nothing like the above.

Charlene, as I have learned in my time of loss, there is NOTHING more important than good friends. You are being a good friend--good friends help even when the chore isn't enjoyable. The artist is happy knowing that her beautiful creations and supplies are being lovingly handled. Hugs to you, good friend.

Charlene, as I have learned in my time of loss, there is NOTHING more important than good friends. You are being a good friend--good friends help even when the chore isn't enjoyable. The artist is happy knowing that her beautiful creations and supplies are being lovingly handled. Hugs to you, good friend.