Not that I'm the world's expert in these things, but for the bead shows at which I've taught, the show organisers like to be in charge of the mandatory class supplies kits. You tell them how much the kits will cost the students, and then they collect payment for the kits and pass that along to the instructors some weeks (or months) after the show.
What this means from the instructor's perspective is that the kits in their various colourways have to be decided upon and assembled some time before bags are packed for the show (but hypothetically as late as minutes before packing), and there's no broadcasting of what colours might or might not be available before the actual class, which is definitely easier for the procrastinators among us, whoever they may be.
The Puget Sound organisers send the students to the instructors' web sites to arrange kit purchase, which is advantageous for a number of reasons.
It gives us the opportunity to share images with the students in terms of what the class projects may look like in alternative colours, which is not always possible on the show site - but as it turns out, this also comes with its own little issue, namely that class project colourways and samples have to be in a photographable form well before the packing-the-bags stage in order to sell class supplies kits as class registration opens.
As I mentioned, procrastinators may not love this so much, even as they recognise that it really relieves quite a bit of the last-minute preparation pressure, because there is none, at least not in terms of the making and photographing of class samples, though of course the compiling of instructions may well be put off until the last minute but still, at least the samples will be done, easing pressure somewhat.
I imagine.
I started with the rivoli pendant class, since I had no samples for which all the beads are available in quantities suitable for supplies kits. All my samples turn out to be one-of-a-kind due to my use of well-aged beads from the stash which
Hence the need for Brand New Class Samples. 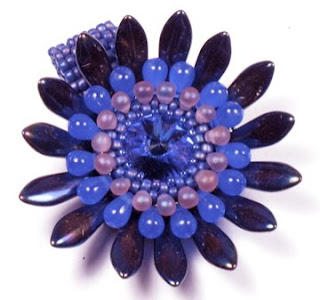 So I've been working on colourways, and before you say anything, I have a problem photographing this colour, so I guess the photo isn't quite as useful as I'd have hoped (the blues are deeper and cooler and richer), but is better than none. I think. 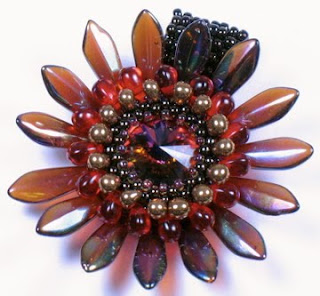 Reds and bronzes pose a whole lot less of a problem. 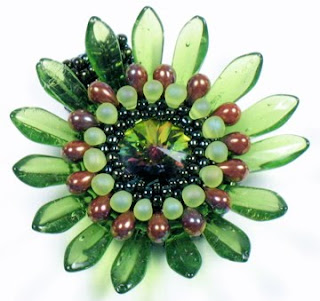 Greens lie somewhere in the middle in terms of colour reproducibility.
Turns out I don't have quite enough dagger beads for the last one (purple and lavender), so it is absent, fortunately not so conspicuously; in fact if I hadn't mentioned anything, one might conclude that this class has exactly three colourways available, which really makes me reconsider exactly how much I should share, but it's already rather too late in this instance, as I've already said I'd have another.
I'm in semi-bad shape for only one other class, as two are based on kits that I have had in my shop for ages (but which are at present available only to Puget Sound class registrants), though I'm looking to expand the colourways in my Pearl Ruffle. Actually, I'm always on the lookout for fabulous new pearls on which to build a new colour, but this would be an especially propitious time. I'm thinking that baroque or other similarly non-uniformly-round pearls might be fun.
Today's beading is somewhat tangential to that lovely smug-making, self-satisfaction-inducing finishing streak, but I'm still being all diligent.
Posted by Charlene at 3/14/2010 09:26:00 PM

Love these, got inspired and got out the beads...see the results at http://gypsysramblings.blogspot.com
Sadly, am too far away to take any classes from you, so must improvise.
Aryd'ell