End of a weekend.
Full of things that mostly don't photograph well, and don't inspire scads of catchy prose. You'll just have to take my word for it.
I finished another thing that was in progress and didn't start anything new. Unbelievably disciplined. I should do my taxes on this diligence roll. 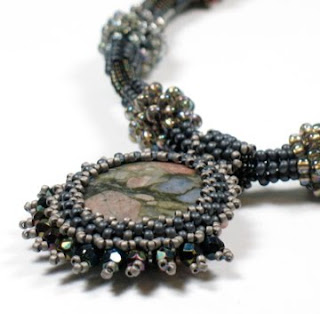 I'd made the pendant a few weeks ago, but no bail, no necklace.
It's an interesting stone, and I happened across it in an online shop which is now unfindable, so I can't check the name of the stone that I believe I remember, and which Google won't confirm: rhyocite. Like rhyolite, but different. A darkish green background with inclusions of smoky blue, lighter green and a mauvey-pink. 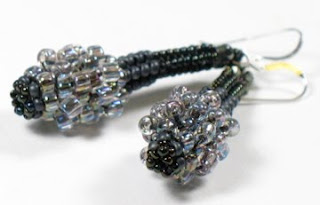 Now it even has matching earrings.
I know I've mentioned knitting, but if you can't see anything, how can it be true?
Given that I'm living in the Show-Me state, I guess I have to.
Show you.
Even though it's not a great picture (there's only so much exposure/colour adjustment you can do when shooting in sub-optimal light conditions), you can see that there really has been progress. 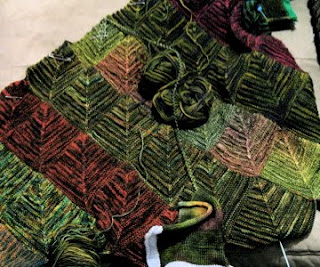 Even though it should come as no surprise to me, it turns out that if you're working from the hem upwards, and the hem is the widest part, and you've completed a couple of the bottom rounds, progress becomes noticeably faster.
It's quite encouraging. I might even get to wear it before next winter.
I'm almost tempted to start another project before this one is over. Actually, I am tempted, I've been tempted for weeks if not months, but I've been steadfastly Not Giving In To Temptation, even as I've been eyeing patterns, fondling the stash, making sketches, writing terse knitting directions, and generally making "I'm about to start knitting something" noises (you may recall that I dyed some sock yarn a few weeks ago. It seemed urgent at the time). I haven't started anything new [yet], in part because I have another sweater in progress, or should I say at a Stuck Point.
Stuck Points are those moments in the lifetime of a knitting project which preclude simply picking it up and knitting because of some planning or calculation which has to occur first, so instead the project gets ignored, and this is when infidelity can rear its head. (I've been tempted, but I haven't acted upon it. According to Jimmy Carter it doesn't count if it's only a mental exercise).
The thing is, I'm not entirely out of love with the sweater, and because it's so lightweight (I'm knitting very puffy handspun merino on 3mm needles), it'll be very useful very soon, if not right now, but since the skirt Stuck Points were easily overcome and I'm making Real Progress there, not to mention almost being able to see the end, I'm loathe to invest the needed effort to get past the sweater Stuck Point.
The day job really cuts into my knitting time.
Posted by Charlene at 3/07/2010 10:11:00 PM