There's a reason I stopped working on this. 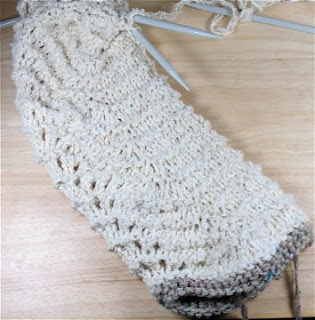 It's ugly!
Yes, the idea of lace at a large gauge is somewhat appealing, but what was I thinking? It really doesn't look all that lovely, and while I love undulations and scallops, the single feather and fan repeat here distorts the sleeve in a rather dismaying way. The picture is taken of the side view because if I flatten it the other way, it's buckled and puckered and I'll tell you here and now, I'm so not interested in having to adjust the stupid thing every time I wear it so that it lays properly on my body.
I do still want a cream cardigan, but not that one. I also still think the idea of a not-cream cast-on was brilliant, since the edges always seem to attract dirt and dinge that never ever quite washes out.
I 'm having better success with the Architectural Rib sweater, though my modifications have changed its character somewhat.
The original design had you cast off (or, in my case, short-row) the side seams by two stitches each row, and do a double decrease at the bust dart every fourth row. The sleeves start happening when the short-rowing meets the decrease point.
When I tried it on, I found it altogether too baggy (and I embraced the Decade of the Eighties with its super-voluminous sweaters) with too much bulk under the arms; so much so that it caused the central hourglass-shaped section to bunch up along the shoulders instead of spreading out, which in turn caused the neck to crumple unattractively.
After much pinching and pulling, I decided to redo both side sections, short-rowing instead by three stitches every row, and adding a single decrease at the bust dart on alternate right side rows to shorten the armhole length more quickly. What this meant was that the meeting of the side seams and bust dart happened more quickly, as both stitch diminutions happened at a faster rate, so that the sweater is now a somewhat fitted affair with narrower sleeves, which of course have the advantage of getting done more quickly, since there aren't as many stitches to get through.
I'm almost at the elbows on both sleeves, and am loving the fit (I tried it on less than half an hour ago). In truth, part of the problems in fit may have been mine, since I didn't use the recommended yarn, and didn't even check the gauge on my handspun, but I think not entirely, since the photos did show bulky underarm folds, though of course these weren't exactly highlighted.
My Bead Fest preparations are well-nigh done, except for attaching stickers to the little tubes of beads for one of the classes. I could also stand to assemble some kits for sale, but I could leave without them if I had to.
Given that my Sunday class, at least according to the link I was given, has zero people signed up, and also given that I actually have not started on the new job, and therefore have not yet been blessed with The Regular Paycheck, I'm debating whether I should bring with a beading project or two to work on in my nice empty classroom, or whether I should just throw in the towel and shop all day. Actually, seriously, I probably have neither the interest nor the stamina (which is I think largely dependent on interest) to shop for more than a couple of hours, and the one thing I really want to buy most likely will not be available, since the vendor isn't on the list of exhibitors posted, though there could always be surprises, I suppose.
Guess in addition to packing enough knitting projects (the cream cardigan, version 2) I'll think about packing beading projects and paraphernalia. I'll probably tempt fate and not pack a task light, since I'm already loaded down with kits and instructions for the classes.
Posted by Charlene at 4/04/2008 07:06:00 AM