Included among my piles and piles of sketches of things I fully intend to make are a few convertible mix 'n' match type sets. There's something I find so appealing about the notion of a basic something that can have bits and pieces attached or removed for a wardrobe of different looks.
In fact one of the first kits I sold was a convertable necklace kit to which you could attach one of three pendants. I still like the concept though now I confess I wish it were a bit bolder and/or fancier.
My ideal beading project is the sort that I can't possibly stop until it's finished. This means that there's enough vanilla beading to keep me happy (stretches of peyote or herringbone or netting), enough spicy beading to keep me on my toes (some sort of funky shaping or join or as-you-go-embellishment), and a next step that I desperately want to get to. The next step may be another piece or a change in shaping or even the end, but it needs to motivate me.
I confess to getting a little tired of lots of identical beaded beads, because even though each individually may have what it takes to please and delight me, endless repetition probably does not.
Another motivation is to make another separate possibly different piece (that is in itself fun to make) that has to somehow connect but not BE connected or sewn together. So something that slots into somewhere, that sort of thing.
I really also love the idea of a bunch of connectable components that can be joined, preferably in multiple configurations, but much of what I've either seen or come up with myself has been dull-dull-dull stitching.
After making what seemed like a fairly significant quantity of rather simple right angle weave beaded beads for my nieces, and not having an awful time while doing so, it occurred to me that this might be a reasonable project component. 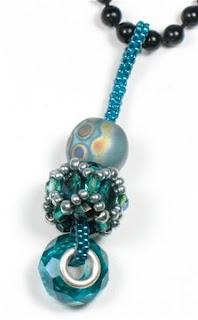 As you can see below, there are two different hangers or cores, neither of which is what I thought I would make (I was envisioning a loop, but that was just too much bulk), but which seems to work anyway. It's essentially a soft eye pin, I guess. 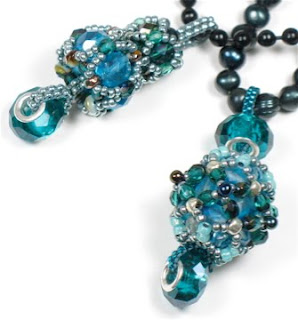 It works for my beaded large-hole beads, as well as commercial large-hole beads.
Version The Next might be a head pin instead of an eye pin.
Whenever I get to it.
Posted by Charlene at 12/14/2010 10:08:00 AM

I always find it interesting to hear your internal process. And then I see the finished work, and would not have predicted the result. Twisty.