So I started this long musing on the nature of People Who Do The Sorts Of Things I Do (like spinning and knitting and beading), and what it is about us that makes us do these things, and what it means to us to give gifts of these things, and the lengths to which we will go to get it right (I was winding a multi-strand ball of gazillion-over-two cashmere-silk yarn and fighting static and knots and back pain and arm pain) and then I had to take a break and then Isis sat on the keyboard and walked on it and stood for long enough on the On/Off button that it turned off, and even though I know that Blogger has that post saved somewhere, I've lost interest and besides, right now I don't have time, so I'll show you the culprit enjoying Hanukah leftovers. 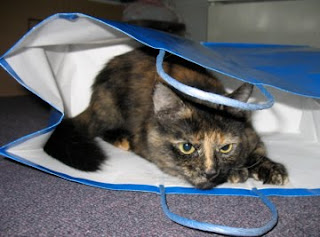 Gift bag. We loves 'em.
I made a sample for the class that I optimistically scheduled for two days after flying home from Australia. 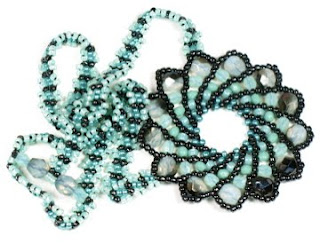 At least I won't have night-before prep, as the instructions are done too.
I'm still scrambling for one or two more classes for the February through May time period, but my bead count was off by one so I just made a little pendant with a beaded bead I found in a treasure trove so old I completely blanked on its existance. 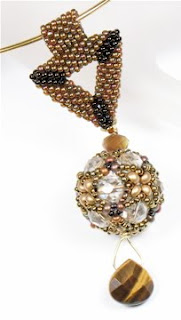 I have two very young nieces who asked me to bring two things for them when I visit: my kitten, and some jewellery.
Sadly I can't bring the kitten (I don't think she'd enjoy the flight too much, if her car travel crying is any indication), but I can oblige the second request. 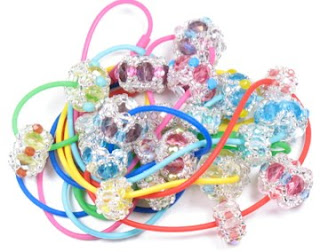 They're very little girls (as you might have guessed from their stated desire to pet Isis), and so there's a limit as to what's practical in terms of beaded jewellery. These silicone-ish necklaces are fabulous and bright and suitable for small fingers, and the beaded beads should be fairly sturdy. And there are lots. And they can take them off and put them on and rearrange them to their hearts' desires. I hope they like them.
SPOILER ALERT: Amy and Stefanie, don't look! 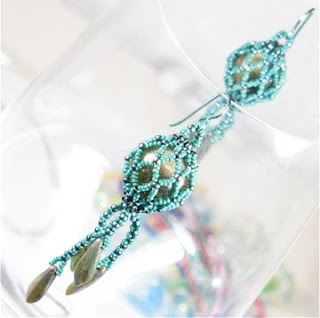 December earrings are marbles captured in netting with charlottes (but your colours are prettier).
While I've enjoyed the challenge of twelve pairs of earrings in my Earring Kit of the Month Club, I'm not confident of twelve new patterns for another full year, though I still have the three-month option in my Etsy shop. I had suggestions for an every-other-month pendant club, but I do pendants for local classes quite often, so that's again six more (in addition to classes) designs that I have to invent, and while it's possible, I don't at this time have a backlog of designs waiting for release, so perhaps I'll take a year off and do it again the following year. Or think about it at least.
Posted by Charlene at 12/13/2010 09:30:00 AM

Who's a pretty girl? (I am not sure if I am talking to the cat or those earrings. Both probably.)