Multitasking invariably means that things take longer than you expect even as you have more to show at the end of the day, but I did at least get one new colour sample done. 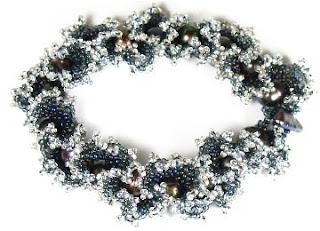 The pearls are this fabulous oilslick colour: some have notes of green, some blue, some copper, some just grey. My favourite kind of sludge (that which requires multiple words to describe). 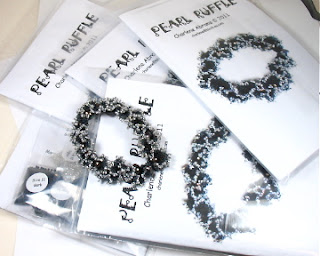 And I packed kits.
Much as I don't want to stop knitting cute summer tops in silks and cottons and rayons, the weather will inevitably get cold, and SOAR is less than a month away and I just remembered that I have exactly one new handspun item since last year and so it's time to dust off some stalled projects and get going again.
I've been all nose to the grindstone, but unfortunately long-sleeved sweaters on small needles (US size 2 or 3 perhaps) just aren't instant gratification projects, especially when they were less than a quarter done at the time of abandonment.
Even though I'll be tremendously pleased at myself upon completion, it's just not as pleasurable knitting on something that you've been studiously ignoring for six months. There's this whole momentum thing which is inexorably tied to the enjoyment, so when the thing that's driving you is not enthusiasm and the momentum of the first blush of love for a new project, but instead guilt, shame and embarrassment, it just doesn't hold quite the same joy.
I'm thinking of diverting myself with a quickie oversized cabled side-to-side vest on huge needles.
Even flirting with the idea of a new love can be add new excitement to an old relationship - at least, that's what I hear.
Posted by Charlene at 9/10/2011 09:33:00 PM