In Which I Convince Myself That I Am Organized 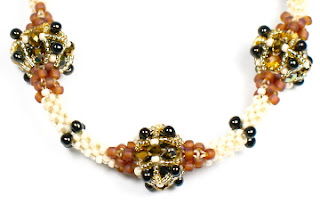 That's the good news.
Bad? The show appeared to have barely been marketed, so that not only were there not enough vendors to bustle up the place, but the crowds were non-existant and barely trickled through, so although my percentage of lookers to buyers was pretty good, there just weren't enough lookers to make it incredibly successful.
On the plus side, I have a couple more kits in my Etsy shop.
My booth turned out pretty well, though my very clever kit display-and-purchase theme neglected to take wind into account when designing both the foam-core board ticket holders as well as the paper tickets, as I spent much of the time picking up the displays and running after blowing tickets. I do have some idea for the next show though.
The tent worked well, and was a great eBay bargain. The tables and sheets, um, tablecloths worked pretty well, except that one of them was accidentally a fitted sheet, so I removed the elastic and used it on a back table and while it wasn't ideal, it wasn't screamingly ghastly.
My poster (printed on multiple sheets, glued together, covered with self-stick laminating paper, glued to a foam-core board and suspended by handmade split rings) was pretty excellent.
The kit sample display cases (large sheets of clear acrylic placed on perpendicularly placed black-painted 1x2s) was also a good idea that proved itself successful.
The weather was generally pretty good, if a bit cold in the morning.
At least I now have the setup to do other shows, which is certainly a part of what's been holding me back (that and inertia).
There's nothing like a frenzy of planning resulting in an avalanche of mess to inspire an organizational spurt. I had already organized my kit boxes, so I cleared some shelf space (of seldom-inspected items whose accessibility would not suffer by being placed somewhere less accessible) and put them within easy reach, labelled so that I can see the contents at a glance.
I still had enough left-over foam-core board that I was uncomfortable simply tossing, and then it struck me.
I store the kit supplies in baggies (a large baggie for the design containing a smaller baggie for each colour-way containing baggies and tubes and flippies of beads and supplies) which in turn are stored in miniature milk-crates (about 8"x7") and Ican never tell what's where, even when I label them. 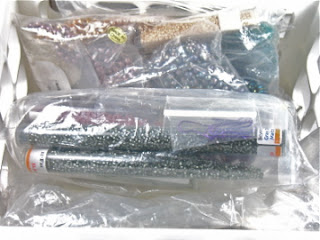 I have to lift each baggie out and sometimes open them up to determine which kit is represented where, which gets annoying. I hate that the baggies are just stacked one above the other, and even if they're labelled (some have stickers on them) the label may be face-down and therefore not terribly much use. Generally there are up to four kits per crate. 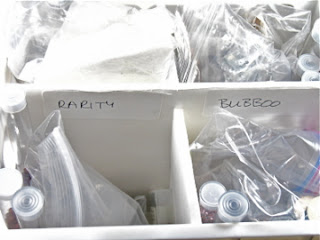 Foam-core board works so very well for dividing crates into quarters, and now I can see what's in which crate!
Except I had enough foam-core board for only four crates, and there are eighteen in total, though not all are eligible.
Guess I'm not quite ready to put away the utility knife and the cutting mat.
Posted by Charlene at 9/25/2011 12:18:00 PM

Email ThisBlogThis!Share to TwitterShare to FacebookShare to Pinterest
Labels: planning and design, samples

I also create kits, Is it necessary to include entire tubes of beads for your designs? Or do you think you would save more by measuring them into grams needed? I like to cut a piece of cardstock in 4 and use double stick tape to adhere small 1 1/2 X 2 inch baggies in stair stacked rows so that all the beads are visible. I then tuck tack that into a 5 X7 baggie. You can also purchase 9 X 6 baggies to put that and your instructions (full sheet neatly folded in half) into. Folks can see the colorway on one side and cover photo on your instrucions on the other. And they fit in one of those portble plastic file rubbermaid tub thingies. I would love to know if that might work for you.
Blessings, Ralonda

Oh, you misunderstand me.

These are the SUPPLIES that I keep at home for the kits that I will fill - the extra beads that I will use to replenish my kits.

By no means do I include entire tubes of beads as part of the kits - at least not unless the kit actually requires that many beads!