I'm a bit of a procrastinator, and unless I'm doing something that I chose to do at that moment, I almost always would rather be doing something else; failing that I draw sketches and write often indecipherable notes on the back of printouts that I no longer need. (Yes, I don't like to waste perfectly good blank paper, especially when I need only one side and most especially when I need scratch paper that's to be tossed anyway).
So I accumulate piles and piles of paper with sketches and notes (and occasionally bits of defunct shopping lists or to-do lists - I'm a big fan of lists), and I go through them every so often, depending.
While preparing for Puget Sound, I accumulated without perusing, but now that I'm in preparation mode for Lady Bug classes (the local bead store at which I teach; my next class is always in the right sidebar here), I'm trying to figure out if I had any good ideas while I was pining to be free to bead at whim, shackled by my own efforts (to teach and make kits to support my beading obsession which paradoxically but not unusually leaves less time to bead what I want to bead now). 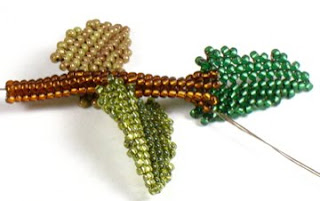 This one worked pretty much as planned, more or less.
All I needed was one practise leaf (the attachment point was not quite right as it deformed the leaf too much), and now all I need is a few disciplined hours in which to make this into something necklace-length. I think it would be better than as a bracelet-length, although it might be pretty fabulous if I braided three strands. 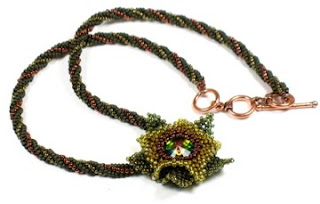 This one, which I finished before starting on the leafy twig was also from a sketch. I didn't exactly consult the sketch while I was making it, so it's not precisely as originally envisioned, but that's just another possible variation.
The pile is still impressive (though I did have to toss a few pages which were either stupid ideas, all lists, or unworkable ideas, of which I have plenty too), so instead of panicking because the bead store wants classes for October through December really early and how on earth will I come up with eight new projects, I can just work through the pile.
I guess the system (such as it is) works after all.
Unfortunately it's not even slightly useful when it comes to actually preparing for classes (as in compiling illustrated instructions), but short of elves, I'm not sure what would be.
Posted by Charlene at 7/19/2010 10:15:00 PM

Love your work!!!! If you have piles and piles of ideas just waiting to be beaded I think you will have plenty of classes for them. Hey if you write a book I would be first in line to buy it!!! Just a thought.