I don't think it's technically a disease, but it's starting to feel like a syndrome or some other word indicating a systemic issue (I'd prefer to avoid the word "problem") of sorts.

I showed them to one of the women at the bead store on Saturday and she found them reminiscent of Fabergé eggs; Fauxbergé is more like it. 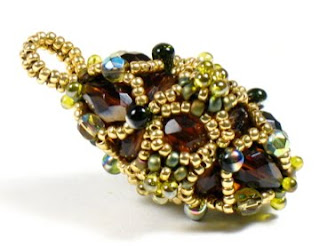 I disliked the low-contrast purples Fauxbergé from Saturday, so I tried high-contrast instead, which is a bit of a swing of the pendulum in that it might be a bit much. Interestingly enough, my spinning friends gravitated to my low-contrast, should-I-cut-it (so I guess I won't now) Fauxbergé.
The base beads inside the midsection are 8mm fire-polished rounds, and so I wondered if it would work with the luscious 6x9mm rondelles for which I'm so weak. 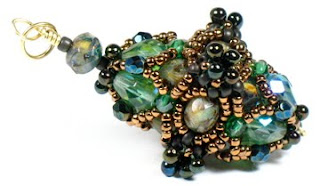 Yes, mostly.
It was much squishier while working it (and still is a bit) because the shape of the beads really do not lend themselves to right angle weave at all, and I was loathe to use corner beads to cover the thread, so it was awkward to work. I definitely wouldn't teach it using the rondelles, though I like the way they're framed in the middle row.

And the finished pieces are not noticeably different in appearance (yes, I made another purple one because despite other opinions to the contrary, I don't care much for the low-contrast one).
Posted by Charlene at 7/27/2010 07:41:00 AM