It never occurred to me that I might like to regard myself from the inside this way. I'm not sure there's really any more that I can say about that one.
Even though I found homes for all but one of the pairs of earrings I was obsessing about last week, I managed to find really pretty aquamarine beads that made me wonder if they'd work for that style. 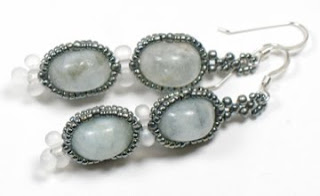 It turns out they do.
It's been one of those weeks where I feel like I've been running a marathon to stay in place, but my time wasn't much to brag about. I did get the June Earrings done though. 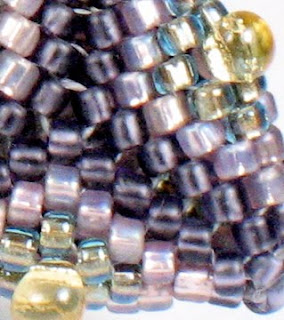 Just a hint, as no one has them yet (some are in the mail, and some will be delivered on Tuesday).
Mostly what I've been doing is packing kits for my classes at Puget Sound. 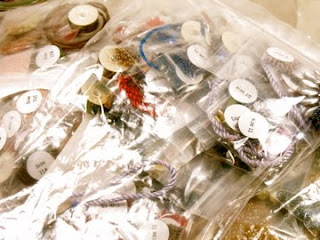 I'm psyched. Enrolment is pretty good, to the point where I might even do better than break even, and that's without the Teachers' Showcase, which is a meet-n-greet with kit sales and class signups. I always enjoy these, even apart from selling kits: I get to meet people I've seen on-line and pay them extravagant (deservedly so) compliments regarding their work. If I want to be Maggie Meister (or Cynthia Rutledge or Marcia DeCoster or Diane Fitzgerald or a host of beaders too numerous to iterate), I'd better buck up!
And while I was feeling all gushy about teaching at bead shows, I thought it might be fun to have a drawing for a kit in each of my classes, as well as contributing a door prize to the Teachers' Showcase. 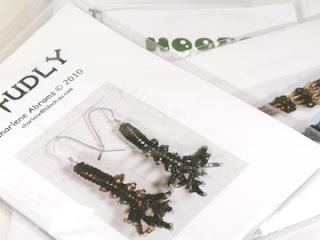 Back when I first released my Pearl Ruffle kit, big, good quality pearls for a decent price were fairly easy to come by, but I've been having a hard time finding them now - and I need to, since I'm running out of a few colours. I have only a couple of purple and turquoise kits left, but I haven't been able to find anything suitable in a colour even remotely similar without doubling or trebling the price, so I've been looking for other colours, with approximately the same success.
In other words, little to none.
I considered shell pearls, which as far as I can tell are an order of magnitude removed from cultured pearls. They seem freakishly regular, which for some reason seems to be problematic for me (I have the same aversion to cylinder beads, which for many imply Beading Nirvana).
I rejected the notion of shell pearls, in part because of the squeam factor, in part because I didn't find them in the right colour and price and size.
I considered the pearls variously referred to as tadpoles, biwa, baroque, blister, and a slew of other equally non-descriptive names that elude me right now, and even ordered some. On arrival I concluded that these would have to be acquired live and in person, as pictures are of necessity two-dimensional, which in this case proved to be an important consideration, and rendered them Not Useful for my purposes.
In desperation, I ordered a single strand of somewhat baroque (read: irregular) pearls in a gorgeous [possibly] natural peach. I think they so worked to! In fact when I do get the ok to purchase the tutorial I was planning a peach version (are you reading my mind?) I am so excited for you and I do sooo wish I could be there!
PS I am curious about your insides though hope all is ok!

Thanks for worrying, but it was just a routine check-up!

And I guess I'd better get cracking on the tutorial...