No, not the way politicians behave when they're supposed to be, y'know, serving the people; the way I behave when I'm supposed to be doing my taxes (which seem to be particularly tiresome this year. I will never attempt to sell anything in New Mexico again, because the paperwork just isn't worth it, especially WHEN YOU DON'T ACTUALLY EVEN MAKE A SALE. Yes, I meant to shout). 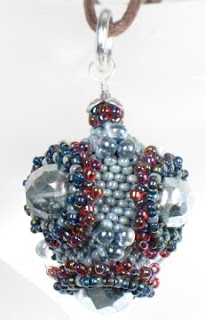 I made this cool little bauble. Pendant. Thingy.
It's not as though it was a complete misuse of my time, as this goes on the roster of classes I'll be teaching over the summer.
What I really want to do now instead of finishing my taxes is make another one, in different colours, as a cube instead of a [whatever this is]
And knit some more (I started a cardigan as soon as I finished the skirt. In big yarn, so it goes quickly - knitted top-down, I'm already an inch or two past the armholes into the body. Yay 5mm needles!) although it counts only for a semi-project, since the yarn was retrieved from a very failed sweater.
Posted by Charlene at 4/04/2010 09:02:00 AM

Taxes-yuck. But as Mary Poppins said, sooner begun, sooner done, and then you can play with beads to your Heart's content...well, after sample-making. If you ever need a bead fairy to help out, drop me a line. Aryd'ell

Hello, your beadworks are beautiful! I like them very much. I would like to ask you if is possible to buy a pattern of this delightful piece? Best regards :-)Dagmar

Thanks for asking, but the pattern is not yet available. I will be teaching it at a local bead store, probably some time in June or July, after which time I will probably put it in my Etsy shop for sale.