Taxes are as close to out of the way as can be: federal are e-filed (and approved!), state are printed out (but not mailed).

I'm not sure what self-mutilating element of my psyche insists that I start thinking about (and magnifying the horrors of) doing my taxes as soon as the first W-2 or 1099 arrives in the mail in January, but prevents me from doing anything concrete about them until April. Something's not right. I should spare myself the worry, but somehow, I never do (and it's rarely that bad, unless for some reason I'm feeling supremely optimistic and confident, and then it's a huge freakin' nightmare. Well, unpleasant experience, more so than usual).

And then there was the scam that could have cost me a thousand or two if I weren't the tiniest bit suspicious: an email from a friend with whom I haven't spoken in a while (I kept leaving messages) purporting to come from London on vacation with family, describing a mugging in which nothing remained but passports and hotel bills, an immanent flight, and uncooperative and unhelpful police and consular officials.

Being pre-caffeinated (checking email on the weekend often happens before I'm fully awake), I made an offer of help, mentioning Western Union, to which I received an immediate and freakishly enthusiastic response, mentioning a sum of seven hundred and seventy pounds.

I asked if she'd mind confirming her identity by answering a few questions.

"What? A million questions???"

I replied that if she were she, I didn't think she'd have any problems confirming that she was who she claimed to be, but there was huffiness, and concern for the family that she was responsible for getting home, and HURRY HURRY NOW I NEED THIS MONEY.

And then I had to call (not London, she was at home) with the glad news. I think she had a rather unpleasant Saturday, fielding calls from concerned friends about the mugging, contacting the email provider as her password had been changed, and changing the contact email address for all her online registrations.

I made a leaf-like earring, which would also make a cool necklace or bracelet. You can't really tell from the picture, but it's not flat; it's perhaps a quarter of an inch thick. 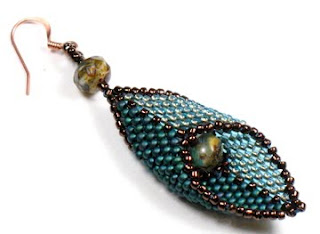 Another class sample down.

And an earring design for April's Earring of the Month kit. 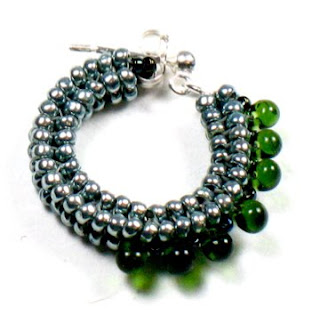 My imaginary hoop earrings (the subject of notes and sketches) turned out to be pretty close, though I needed to adjust the curvature, and the incorporation of the earring findings turned out to be slightly more complicated than I'd envisioned.

This is a not-very-well-photographed front view. They're something over an inch in diameter, perhaps an inch and a quarter or a third. Now that I have the proof-of-concept down, it shouldn't be too much trouble to make bigger hoops, or ovals.

A couple of last-minute club sign-ups meant that I don't get to keep one of these for myself, as I have no more earring findings. Guess I can always get more.

And this has to be one of the funniest commercials I've ever seen:

Email ThisBlogThis!Share to TwitterShare to FacebookShare to Pinterest
Labels: beading, earring of the month, scam