Usually I make something and then, unless I'm pledged to teach it, I never make it again, but somehow, I got all enchanted-like. I feel like a one-trick pony. 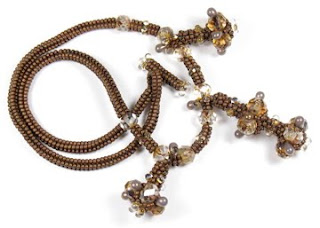 Say what you will about Czech beads, seed, fire-polished, pressed, whatever, but they come up with some gorgeous finishes that make them hard to resist. Toho liked them so much that they collaborated on a bunch of seed beads with luscious Czech finishes.
My local bead store keeps getting more and more of these slightly large (about 5 x 8mm or 6 x 8.5mm or thereabouts. Consistency in size seems not to be of the highest priority) faceted rondelles in faux stone finishes.
Gorgeous.
On the expensive side for glass beads, but they're luscious, enticing, irresistible, and actually I've been relatively restrained. 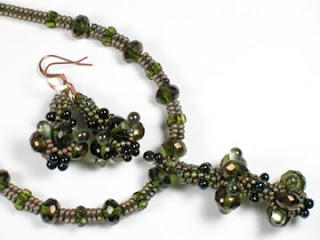 Then I came across a picture of a very rudimentary beaded bead (it looked as though someone had had an idea and then - oh look! A bird!) on some blog or another, and I was inspired and off and running. I did mention that I had some of these beads, didn't I? And that I had no freaking idea what to do with them? (I don't string much. It's just not satisfying) 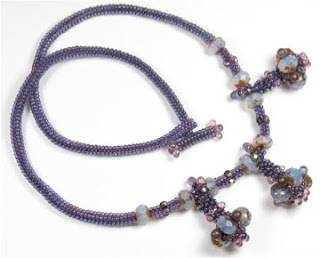 And then suddenly, I had A Something To Do With Them.
And as luck would have it, the bead store started their great big end of year sale, and now I don't feel so much as though I've been so good, so restrained, but on the other hand, I'm not depriving myself either.
Feels pretty good, actually.
I like that I found something to do with them (something with seed beads, if that's not too redundant), and I like the something that I did with them. And will no doubt do again since I have quite the stash now.
And then I made some more class samples. 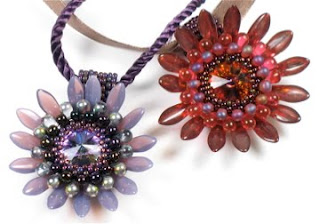 Flower. Pretty flower. (As a young child I had a 45rpm record of the bit from Disney's Bambi where he meets the skunk. Stream of consciousness. I enjoy the ride).
I couldn't get the mitred squares skirt out of my mind. I mentally wandered through my stash a few times.
Sock yarn?
Do I have enough sport-weight yarn for a skirt? (I don't care if I have to dye it - do I have enough?)
Worsted weight really would be too heavy, wouldn't it? Too bad, because a skirt is probably about twice a sweater in terms of the knitting, and worsted weight would really make it go faster.
What about handspun? There's that yarn collection that was going to be a Scandinavian coat/cape/cocoon thing - how far did I get with the spinning on that one? I'm definitely not using any of the luxury fibers - you really don't want to subject cashmere or baby alpaca to the indignities of being sat upon, sandwiched between tights (or a slip, if I have to) and some nasty synthetic chair cushion, after all, so it'll have to be wool. Besides, wool will be less likely to give me Saggy Butt, what with its memory, natural stretch and all that.
In spite of the immensity of the task, in spite of the fact that I'm currently knitting (and ripping and reknitting, as is my wont) a sweater on 3.25mm needles - and I can get away with such a large size needle as I'm a somewhat tight knitter - which isn't exactly an instant gratification project, in spite of all that, I came to the conclusion, aided by the Wednesday knitters, some of whom are knitting AFGHANS for crying out loud in sock yarn, that sock yarn is indeed the answer.
I made a sample using my sweater needles which was too ghastly to be memorialised by the wonder that is digital photography, and went down a size or two. 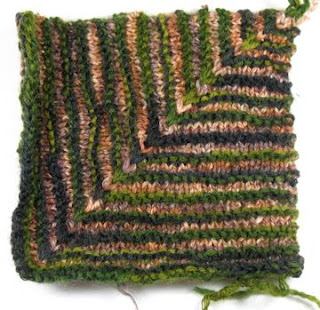 Even unblocked, I think it might do.
I have a boatload of dyeing ahead of me, and I'm actually quite pleased at the prospect, and not only because it's quite a lovely feeling to be able to satisfy an urge, but also because it's going to use up a significant fraction of my sock yarn in all those colours which were probably way more useful when I was set on making most of the socks in Anna Zilboorg's first sock book, but a whole lot less so when I realise that I really don't care to all that much.
The latter is especially pleasing as I've been weak in the sock yarn department over the last year, and not all that assiduous in terms of maintaining equilibrium. I think the entire year has seen a pair of socks, possibly two. Not quite up to par.
The dye pile has magentas and teals and yellows and blues and too many clear solids to mention without a bit of a shudder (I'm not a fan of pure primaries and secondaries; give me murk and sludge any day), and soon they will all be variegated earthy and forest tones.
Who, after all, would not be cheerful at the prospect?
Posted by Charlene at 12/31/2009 08:03:00 PM

You are right, these are just gorgeous...
Regards Angelica