Pictures speak a.
Right?
There's a story behind this one though, and I think there's still more to come.
Back in the old country my best friend Ana, she of the efficient first name and over-compensating full name (just imagine the titters at our graduation when the dean stumbled over "Ana Paula de Andrade Balthzar Palma Figeura") was quite the knitter, in fact she won some knitting competition for an intarsia confection years after I left.
Due to business travel, she was able to visit (and it turns out that this was the last time I saw her) Thanksgiving weekend of 1993. The day before she got here, my learn-to-spin kit (spindle plus three ounces of fiber plus sketchy instructions) arrived, and delighted as I was to have the time with her, I also desperately wanted to have at the kit, but it had to wait until Monday evening after work, after the kids were in bed, after I'd fed my (now ex) husband and washed the dishes.
The spinning thing really took, and because Ana had been such a good friend and because she was a wonderful knitter and because there are few things better than the perfect gift, I decided to spin her some yarn.
I bought a pound or so of raw white targhee, and a pound or so of raw brown something else not quite as soft as targhee (I think it may have been dorset), washed it, blended some of each, carded it and spun it.
White, tweed and brown yarn.
I had heard that there was a way of dyeing with pokeweed such that it kept its fabulous deep burgundy-maroon and did not fade to rotten orange, and while I can't attest to the veracity of that, I will tell you that if you let the temperature get above a hundred and sixty degrees, after fifteen years or so your yarn will no longer be maroon.
Anyway, Ana never made it back.
I threatened and cajoled and issued ultimatums, but she never visited again (and I haven't gone back there since 1989), so I used the yarn for myself. It's a good workhorse sweater, but until yesterday morning, was foolishly long. As of yesterday afternoon, the length is far more useful, but the story pauses at ick orange. 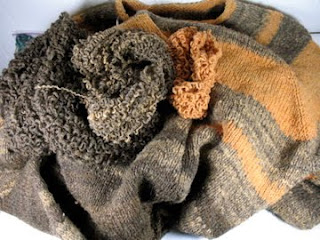 There is a plan though; time may well be at a premium as usual.
Class proposals are due in a month, and I'm off to a running start with this necklace.

Could be a bracelet; would work as earrings, and it could also be a fancier necklace (with more shtuff).
Pendant. 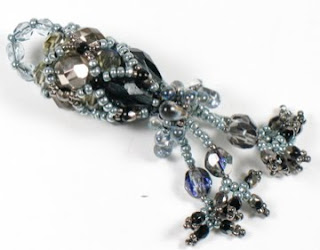 Cross-woven with overlay and fringes.
Still more leaves for Nancy. 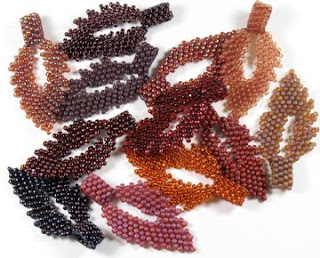 At last count, I had five more to go, and then I start the actual necklace.
Four more days to go at the current job; new one starting on the sixteenth. Best of all, I start with two floating holidays that oh dear I just have to use before the end of the calendar year; otherwise I'll lose them. I think I can live with that.
Posted by Charlene at 12/07/2009 10:45:00 PM