I was going to title this post Rather Productive, but then I flashed to this delightfully silly site with my favourite Viking Kittens [edited to add the link - I did say it was silly], and went with whim instead.
I did say that Mark I of the donut bail was more of a concept study than a finished product, and I am much more pleased with Mark II. 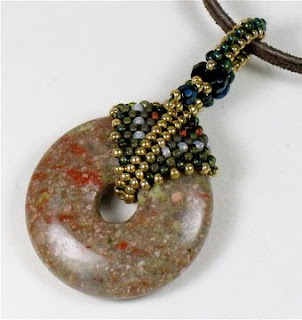 The bit that fits over and holds the donut is the same, but the part that does the hanging from the necklace thing is far more to my liking; more texturally interesting I think.
This is what I was thinking of, pretty much, when I started playing with floral medallions last night. 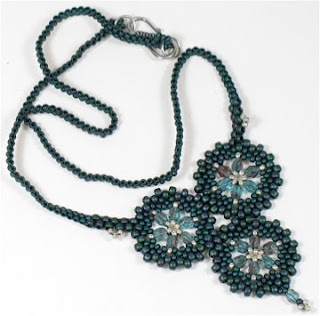 Actually I was envisioning a bracelet in which five or six of them were connected in a row, but as I had enough of the centre aqua/lilac beads only to make three medallions, I went with a necklace instead.  To tell the truth, you probably don't need more than three for a bracelet, since the interesting bit is generally what sits on the outside of the wrist rather than the inside, which could just as easily be plain open rounds (i.e. without the floral bit), but I'll leave that for later, as right now I'm going for a walk.
Posted by Charlene at 12/28/2008 12:05:00 PM

I think I like the second iteration better also.

Another thumb up for this second bail -- and I liked the first, but this one is even better!