The Thrill of the New 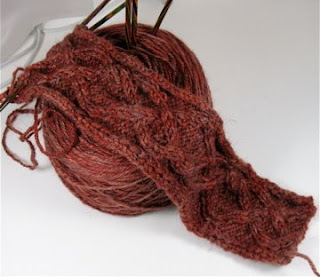 I'm the Queen of Small Amounts when it comes to fibre shopping: I want everything, and the only way that's going to come close to happening (and then even not so much) is if I don't buy in bulk. This of course means that I end up with smallish skeins of yarn, even if I combine a number of different fibres, which is why I have so many richly-coloured yarns in twelve-ounce lots. I three-ply, often from three different rovings, since four ounces seems to be the quintessential put-up when it comes to bundling spinnable fibre.
It also means that I rarely have enough of a single yarn for a project (read: sweater. Smaller handspun projects are on the rare side), so that when I do (which invariably results from having bought a fleece, against whose charms I have no antidote, or at least no more than what amounts to token resistance) it's an event of great import, and requires many hours (in meetings or while waiting for a build or an update or a download or when I can't fall asleep at night or when I'm taking a brisk walk or driving) of contemplation, sketching (not while I'n driving though), guessing gauges and then calculating everything as though my guesses are on the nose. They're generally at least close.
I tend to change my mind along the way, sometimes radically, but often more in detail than overall aesthetic.
What I wanted with my three pounds of wool-kid-silk blend three-ply yarn was an A-line jacket. I vacillated between the yoke knit sideways with an under-bust cable, knitting the sleeves and yoke as one, working short-row godets to shape the skirt, using inverted pleats, but in the back of my mind I was thinking of a jewel-toned jacket by Luisa Harding (click on "Index") in the Best of Rowan book, only I didn't know it until I found it while paging through my knitting book collection, no doubt looking for something else.
I don't care for the collar (too wimpy) or the dropped shoulders (too eighties), but I like the way it's made in panels, each with a cable down the centre, and the way the sides of the panels get decreased away to nothing, so that the yoke is just all cables.
I can also do better than a garter stitch bottom edge, hence the above picture, which is the cuff of the first sleeve which hasn't yet been joined into a circle. Once that's done, I'll pick up stitches around one edge, pick a cable of which I have eight which meet my criteria: including exactly two purl stitches at each edge, the cable panel is 24 stitches across. The three that couldn't be kludged up (by adding another repeat or part thereof) or down (generally by changing 6-stitch cables to 4-stitch cables, which is actually better for this project since all of the cables I'm using fit this paradigm) to fit will become either cuffs or bottom edges or part of the collar.
I'm pretty psyched. I think this'll be awesome.
I was industrious and dutiful though, and finished another class sample. 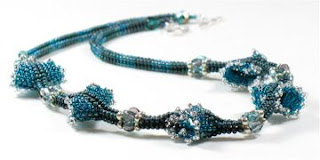 I love technology, and the way I can listen to Fresh Air and Wait, Wait ... Don't Tell Me and This American Life and oh yeah news too while I bead. I love that they save it all, and all I need is an internet connection. Not that I require noise at all times, and it's actually pretty useless when I'm writing instructions or figuring something out, but when it's just doing More of the Same, the whole experience is enhanced.
I also did some experimentation, and while I like the way that the medallion on the left has a sturdy, raised frame, I don't so much like the way that it squishes and distorts the floral motif in the middle. The medallion on the right will easily zip together with another the same and will make a somewhat fluid, fabric-like surface, whereas the technique I used (and didn't complete) on the left will be better suited to free-standing components which need to be stiffer. 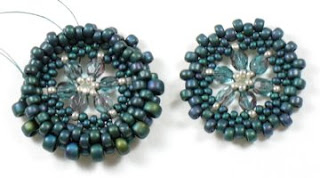 You'll never be done. It's the best part of you.