I'm not sure I'm quite recovered from Thanksgiving weekend and (as usual) I didn't get quite as finished as I wanted to, but that's the price you pay for optimism and [over-]confidence. And it's not as though it really matters in this case.

Turns out that twenty-five or twenty-six hours a day would have been better as I went to bed later and later each night. You'd think I was partying all weekend long. 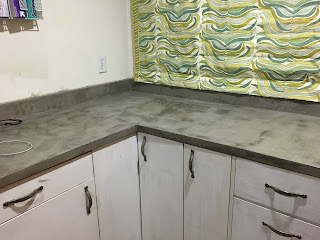 I do have the cure-and-seal stuff on, two coats worth and while it definitely seals the surface from water penetration, I'm not thrilled with the finish as you can see brush marks (from the first coat) and orange-peel marks (from the second coat when I tried a roller).

This isn't the final coat as I still plan to apply a few coats of a food-safe sealer so I have the opportunity to sand off sealer imperfections between coats.

My hands are resting a bit right now. 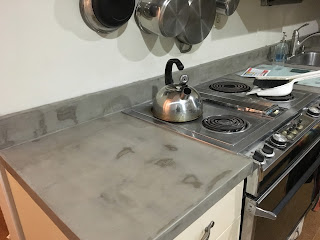 I decided to embrace the burnishing marks because I'm pretty sure I'm not going to want to expend the effort to grind them off.

And now I can start thinking about the next phase of the kitchen make-over.

There is painting (cabinets and walls).

There is the construction of new shelves (I'm pretty excited about that one).

There is the construction of under-cabinet pullouts and pulldowns which might just wait until later since neither the painting nor the new shelves depends on their being complete.

New shades need to be made - that fabric is so last decade.

In other news I finished the necklace ends of this pendant. 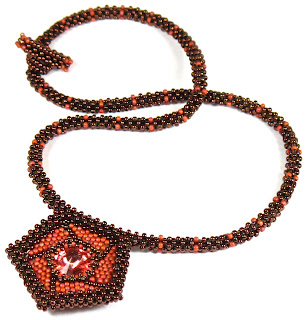 I know I always congratulate myself on actually getting all the new class proposals in on time every four months, but this last time it was a bit tight and I didn't get to rework this one until after I'd submitted it. 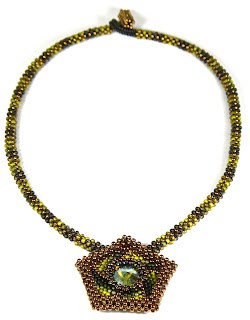 I loved the first version (in large part because of the colours which I chose with barely any consideration and which generally turns out better than over-thinking) but the new version is so much better.

Structurally, I elevated the rivoli a little so that it stands up above the background which both looks better and also makes the back flatter so that it should hang better. I also oriented it differently so that the necklace starts in the middle of a side rather than at the corner. I don't necessarily like the orientation better but if I think the first version suffers from the alignment of the necklace rather than its positioning. I might actually rework that again.