It's kinda been a week, and I haven't been all that focused on making things so that I can post pictures, and although it's not nothing, it's not much.

A pair of earrings to match the pendant I made last week (class samples). 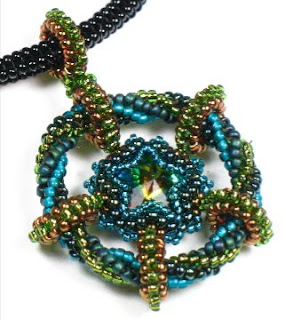 A pendant I finished today, although obviously not the chain. No, I didn't intend for it to hang on a black chain.

I just realised that it's a bit on the Harry Potter side. You know, pentagram-ish. Witches. That sort of thing. Not my intent, I swear.

I knitted a bunch. No pictures.

I took my baby to college. No pictures. It rained as we moved him in. A lot. An inch, according to the weather people, who are quite a bit better at reporting what has happened than what's going to happen.

My oldest turns twenty-one at the stroke of midnight. No really, she was born at 12:01 ayem twenty-one years ago. The hour is significant only because it gave me an extra night in hospital which when you have a newborn is like being at a fancy hotel spa thing, relatively speaking that is. I mean, there are no facials or hot stone massages or awesome food and expensive mineral water, but you do get waited on hand and foot, especially when the epidural takes a full twenty-four hours to wear off enough that your legs can support your weight.

I'm still dealing with cat pee, although at this point I can't tell whether it's pee that I'm smelling or merely the gazillion products I've been using to transmute it into something better.

That's what the enzymatic cleaners do, isn't it? An analogously Rumpelstiltskin thing, but at a sort of lower level. I mean, I think straw has its uses (cat pee does not, as far as I can tell), but gold is better (and cat pee transmuted into water is definitely not as offensive as its starting point).

So far it's been cheaper than getting a new tile floor or even a new carpet, but probably not quite as effective, so I guess you do get what you pay for, at least in some instances.
Posted by Charlene at 8/20/2011 10:19:00 PM

Cat Faeries makes excellent products that work on stopping the behavior and getting rid of the bacteria & urine. Also I have more than one litter box :)

That pendant is awesome!