I think I'm usually pretty decent at combining colours in beading. Sometimes a monochromatic palette with variations in finish and depth of shade is appropriate, whereas sometimes contrast makes beadwork sing. I usually know what I want, and I can usually get it. 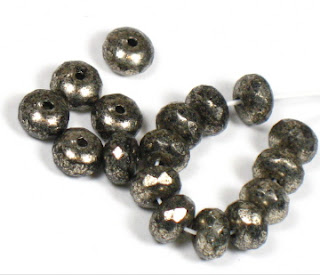 I'd been eyeing these pyrite-effect rondelles for ages, and then eventually gave in and saved them for a while. Wasn't entirely sure where I wanted to go with them.

On Tuesday I handed off class samples, and had a little me-time before the next class or set of classes, and decided to indulge myself with these beads.

I wanted a metallic industrial look, sort of a mixed metals effect. Since the colour of the beads lies partway between silvery and gold-bronze, it seemed the perfect opportunity to use both. 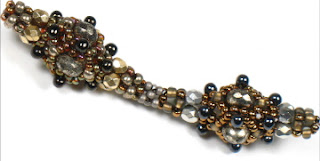 Meh. (The picture is very flattering. All my pictures float around average: the really good things photograph poorly and the uninteresting look better than they really are).

The fringe beads are too dark and stark and the others look messy and the lovely rondelles fade into the background. I thought I knew what effect I wanted, but I got what I wanted but it turned out I didn't really want it. 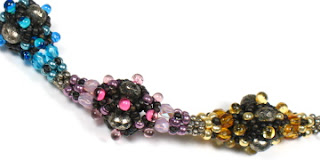 Apparently what I REALLY wanted was colour and contrast. Not where my first instincts led me, and not where my plan led me, but at least this way I know it's better. 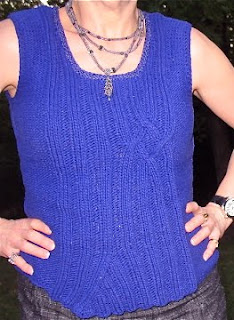