It's That Time Again

Class samples time.
I'm teaching on Tuesday,  so a couple of samples in different colours are good. 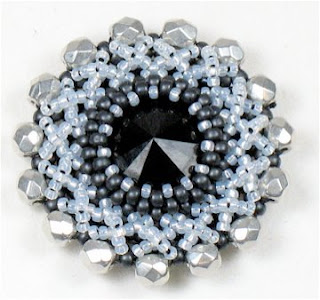 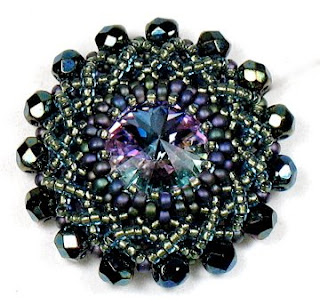 Not that I went overboard or anything, but it turns out that I have a bunch of charoite, the kind that has green as well as purple, that was a perfect match for the rivoli which also reads both green and purple.

I was helpless in the lure of colour.
I've said it before: I'm weak.
I can't decide whether to keep this one (I really kinda like it) and make a chain for it, or to sell it in my Etsy shop. Or, I suppose, make another one to sell. I believe I have another suitable cab.
Much to my surprise (which is what happens when you only check your calendar a week into the future; two at most), class proposals for the summer semester are due in about a week.

I didn't get all that far with those.
Apparently Pendants R Us. 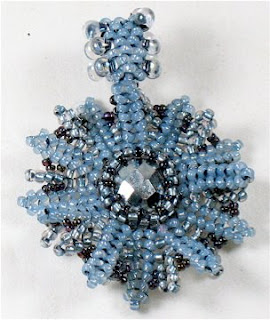 Of course, if I had checked the calendar, I might not have spent time finally making the chain for this cab, which I worked on about seventeen thousand years ago (or perhaps sometime within the last twelve months). 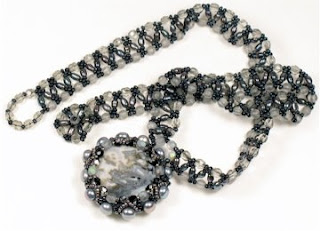 Even though I'm really pleased with the chain and I think it's a perfectly nice and useful necklace (who doesn't wear black? And grey?) and even though the stone is lovely and I don't have another like it, I don't feel compelled to keep this for my own. Perhaps I'm growing up.
My daughter doesn't approve of such thinking.
I also wasted ^H^H^H^H^H^H spent time knitting, resulting in a complete sleeve partially attached to a sweater body (missing neck and bottom edging) and a few inches of sleeve Numero Deux, and best of all, both completed parts fit satisfactorily. No pictures. So sue me.
(The notion of knitting time potentially being wasted time lies in the fact that even though today was on the damp, drizzly and chilly side, it's close enough to summer that wool sweaters aren't so much called for, and won't be entirely necessary for quite a few more months. On the other hand, if I stop now, I may never finish. Besides, I don't have anything else at the "just sit down and knit" phase, and I have to do something when I'm not the carpool driver, don't I?)
Posted by Charlene at 4/19/2009 10:15:00 PM