... can't come back to haunt you, right?
So this year, the badges are ever so slightly different: there's a little square on the upper left in which you're supposed to write which number SOAR this is for you, and in which by far the most popular number this year is one. The number one. The n00bs are playing it straight: no cherries, nothing like that, just "1st" inked in. 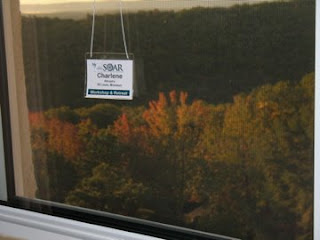 This is [the view from my room and] my fourteenth SOAR. I'm clearly not a SOAR virgin, so I guess I must be a SOAR slut or a SOAR whore, though I am not by a long shot the most, um, experienced: there are two twenty-threes and one other fourteen that I've seen, and I haven't seen everyone yet - it's only barely Tuesday, after all.
The following is most definitely not something I have done while here in the Poconos, but was in my camera when I downloaded the above picture. 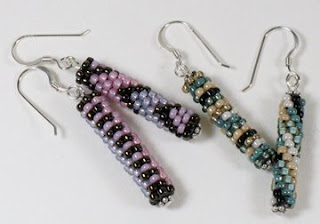 More earrings for the Amy Sale.
You'll also no doubt have been nervously perched on the edge of your seat, waiting to find out about The Knitting Project That Wouldn't.
Plan XXXVIII (or thereabouts) involves knitting a moderately substantial strip on the diagonal, grafting it closed, and then picking up stitches for the body of the sweater using the main purple yarn. Plan XXXVIII (subject to modification depending on the state of my memory and ability to stick with Plan XXXVIII) originally also included a spiralling row of eyelets starting at the bottom and ending when there's nowhere to go, but I forgot, and I'm about fourteen rounds into the body, and I spent the time this morning between when my neighbours thought it expedient to shower and talk and generally make noise, and when my alarm should have gone off, debating the merits of dropping stitches all the way down so as to insert my spiralling eyelets in the event that no one is able to lend me a crochet hook of suitable size, being that it's a rather tedious business with only knitting needles.
The jury is still out.
I haven't had coffee yet. It's only Tuesday and already I'm sleep-deprived.
Yes, it's SOAR.
Posted by Charlene at 10/07/2008 06:26:00 AM

As kicked as my ass is, I still totally miss it already again. And it felt like more than just a second SOAR. But also totally new.

I know this is an old post, but I finally got around to sorting out some of my SOAR stuff and found your card! I was wondering how I could contact you.. :)

It was great meeting you.