I Got The Goods 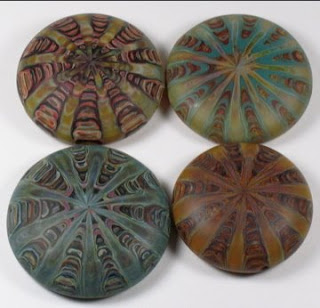 Aren't these delicious? They're all slated to be made into necklaces approximating this one: 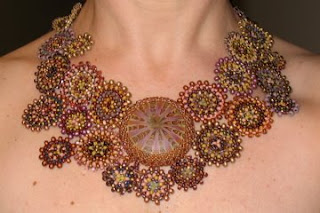 I can't wait to get started.
On Sunday I went to what I guess I'd call a second-tier art show, though it claims that it's been called the "#1 Art Show in the Midwest". Perhaps, but whoever was doing the calling doesn't get out all that much apparently.
It's smaller than the ones I go to semi-regularly, so for example there was a single weaver with jackets, lots of them, not bad, but a bit stuck in the eighties or nineties style-wise, unfortunately. A bit dated.
There was a single seed-beader, with very nice stuff, though nothing stunningly outstandingly unique.
There was quite a bit of jewellery, most OK, a couple rather nice, and one in particular was absolutely ghastly, the sort of thing I remember seeing in London back in the eighties: very big, very flashy, huge rocks, no style at all. The shame of it is that the various stones, pearls and materials were quite lovely, but the designs were, in a word, hideous.
All criticism aside, I'm thinking of applying for next year. No, I'm not selling myself short, but I am thinking of testing the waters, as I've never applied to be in a juried show before, and since the booth and application fees aren't horrendous, it might just be worth a try. I have until the beginning of next year to get four fabulous slides and a decent inventory together, and if I can do that, I probably should. And if it goes well, by which I mean "not badly", by which I mean "at least one person buys something", I can aim my sights higher.
Then again, I'm the queen of pie in the sky, and so it may well not happen, but still, it's fun to contemplate (and not scary, since it's not a top-notch art show). I suppose I'll have to start referring to my beading as "My Art", ugh.
Posted by Charlene at 5/19/2008 05:13:00 PM

which art show? Laumeier? It wasn't on Mother's Day this year?? I've lost track of that show.

And who was the weaver?

Curious minds and all that....

If you submit pieces as beautiful as that necklace, you will be a shoe-in. Definitely try it out, you may find yourself at even more upscale shows in the future. A beadweaving artist friend of mine just got herself her own studio in a prestigious art center here in the DC metro area. Good luck !

I still love that necklace in an unholy way.

Love those big round thingies- whatever they are! :)