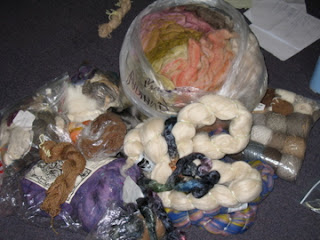 After a day of travel (eleven hours in a minvan, five people, six wheels, an inkle loom and luggage) and a day of work, SOAR seems like a distant memory, but I do have New Fiber.

Really though, it's a small but respectable addition to Ye Olde Stashe: respectable due to both the small amount (at $25/ounce, small is all I get) of paco-vicuna as well as the nice big bag from Rovings.  The picture is a bit of a cheat though: the neat balls of natural yarns on the right are old, old, old and are waiting to be made into the Yum Sweater I've been promising myself since I started spinning.  I'm thinking Something Modular, but I guess I usually do.  I wonder if I could come up with an entrelac variation that Kathryn Alexander hasn't already invented?  Nah, probably not.

Next trip: Chicago.  My friends Nancy and Adriana from San Francisco may end up being on Oprah; either way, they'll be in Chicago through Saturday at a niiiice hotel (according to the website anyway), which warrants another quick road trip.  Listen, I drove up to Marengo and back in one day to fetch my Victoria, so overnight in Chicago will be just peachy.

I tried and I tried to insert pictures of the classes, but the server blah blah blah. So sorry.

Charlene, any chance of you coming through Champaign on the way to/from Chicago?

No, sadly, I'll be rushing hell-for-leather both ways, and it'll be lateish both evenings anyway (I leave fater work on Thursday,and return leaving around dinner-time on Friday). It's been YEARS since I was in Champaign - I think the last time was in about 1997 for a contra-dance, and before that in 1989 when I was still in grad school.

That's .... AFTER work on Thursday! Jeez, I need to proof better!

Charlene, it was really wonderful meeting you at SOAR. And I have to say I'm very pleased to know I'm part of a group that contributed to raising the Goof Quotient. I like that. Cheers!

BTW -- Julia (from SOAR) is: http://scrubberbum.typepad.com/moth_heaven/

What what what--Nancy and Adriana might be on Oprah? Are you serious? (Sarcasm-impaired over here.)

Yes, I'm serious (I'll see them tomorrow and find out what happened) and yes, the vicuna *was* $250/oz. I swear, Toni had the SAME bag of vicuna just as full, last year too...