No Big News or Anything 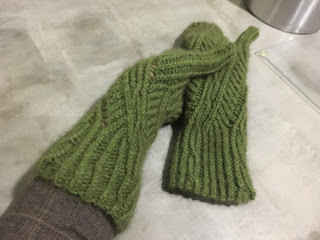 I made merino-possum-silk mittens from one of my New Zealand yarns. Yum yum!

I started disassembling my kitchen cabinets so that I could paint them. 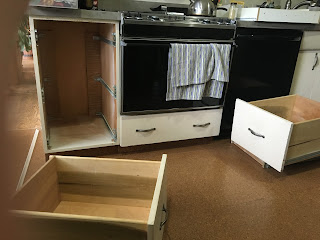 Turns out it's way slower than painting a room because this fancy fancy paint has to dry for at least sixteen hours between coats and is supposed to cure another three to five days (this part isn't quite happening exactly) so if you're painting backs as well as fronts of doors, two coats on the backs, three coats on the fronts (I have a gallon of the paint; I've used less than a third of the can) it stretches the joy out quite a bit.

And that's without sanding or priming. 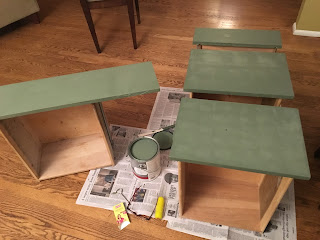 I'll spare you the endless pictures of my living room as painting station; you can extrapolate. Also the explosion that is a kitchen when most of the drawers and cabinets have been emptied onto the countertops. Just imagine the disarray. 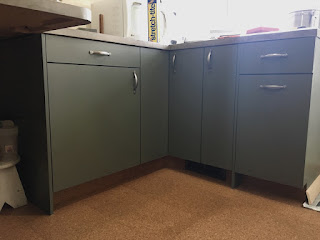 I'm very pleased with the colour even though it's not exactly what I had chosen because these fancy fancy paints have fancy fancy rules: the manufacturer will only let their distributors mix colours in their fancy fancy catalogue rather than any colour in the entire world like the big box stores which don't keep this fancy fancy paint which isn't quite as miraculous as I was led to believe but I guess we'll see once it's cured and hard as titanium or whatever.

It's a little greener and a little bluer than I'd planned; I'd wanted something altogether murkier but I don't dislike this. And it looks good with the concrete countertops and the cork floor so I'm not actually complaining. 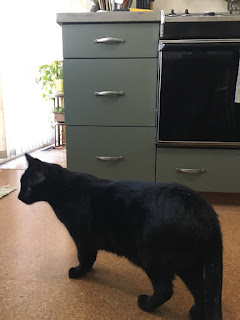 The cats were surprisingly respectful of the painting process, only rubbing up against cabinet doors and drawer fronts before I painted them, avoiding them while wet, and only walking on them once they were mostly dry although I fear before less than sixteen hours had passed.

But they are after all just cats so it's not as though I should be disappointed, especially as their sense of time is dictated only by their stomachs or my appearance in the kitchen: if I'm there it must be time for food. All other time is uninteresting and not relevant to any activities or lack of them.

I was also supposed to teach a class on Tuesday for which I prepared two samples, only to have it sort of cancelled: cancelled in the sense that no one was going to be showing up, but not in the sense that they didn't pay for the class nor expect the instructions. Which they were given.
Posted by Charlene at 1/23/2016 04:02:00 PM