So on Tuesday morning we woke up in Auckland, took a plane to Fiji, had tourist food on a sweet little beach (and dipped my toes in the sea), got on another plane, woke up and it was Tuesday morning again (a couple of hours before we left Auckland), spent the day in LA with my daughter, got on another plane and came home. It was actually the wee hours of Wednesday, but it was close.

On our last day in Auckland we really wanted to see the glowworm caves (sounds cool, right?) but the single daily public transport (bus? train? don't remember) left while my son was doing his bungee jump and there. Was. Not. A. Single. Rental. Vehicle to be had in Auckland (and I'm excluding those that were double or more the usual rates).

So we wandered around Ponsonby where they are creative with their restaurant namings, witness exhibits A, B and C: 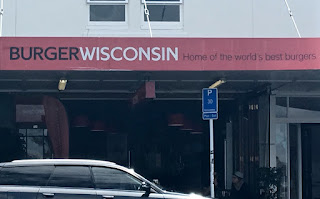 Exhibit A: Wisconsin is world-famous for its burgers? Really? 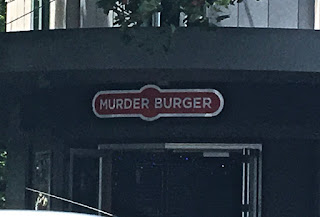 Exhibit B: Non-vegetarian burgers I guess. Or perhaps burgers so good you'd commit murder to eat them? 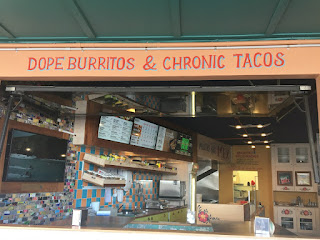 Later on we climbed Mt Eden, a dormant volcano. 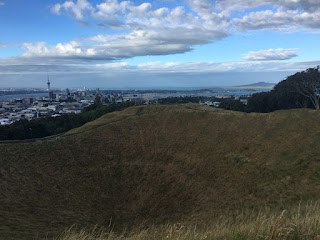 My camera couldn't quite capture the dimensions of the crater: it's a very steep cone-shape indentation, not wide and flat like that from a meteor. 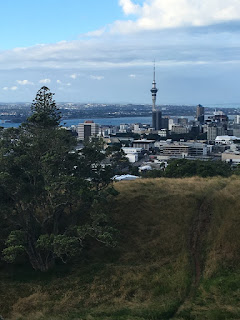 The views were lovely too, and we had the clearest day. 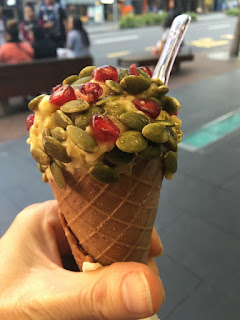 We went back the the most awesome ice cream place ever where I'm pleased to report that their fruit sorbets/gelatos/ices/frozen confections are every bit as fabulous as their cream-laden ones. Tropical Passion (or something like that) studded with pumpkin seeds and pomegranate seeds. No complaints at all.

Then there was packing and the like and after one movie we were in Fiji where it was very hot with very high humidity and no air conditioning (except later as we were to find out, in the international departures lounge).

The whole leaving the airport thing was very complicated due to luggage issues (we had to take them through customs if we went through customs and then leave them in the Left Luggage) and low-tech everything. I mean they have their basic airline computers like everywhere else had in the eighties, but not much more. Left Luggage was a woman with a book where you sign in and sign out behind a desk next to a room. No electronic anything besides lights. No air conditioning, no scanning boarding passes to get the relevant information, no credit cards accepted.

We found a taxi driver who wanted to send his kids to college on our few hours, wanting to take us here and there, taking us through the village and past construction sites - the so-called scenic route - to the little resort (I'd call it a beach-side motel but whatever) on the shore where the only Fijian food were on the dinner menu and only the lunch menu was available. 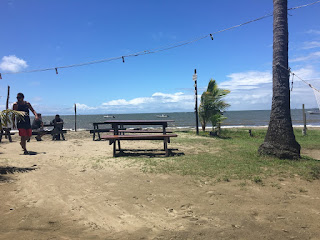 The beach was ordinary and the whole experience was a bit sad and disappointing.

Their security is odd, to say the least. You know how in the US (and other Western countries too) the rule is that the only liquids in your carry-on have to be in smaller than three-ounce (or 100ml) containers and all have to fit into a quart-sized plastic bag? Yeah well in Fiji you have to put any liquid/gel into a ziplock bag. It has to be in a zip-loc bag, that's the thing. So if you buy something at duty-free they'll only sell it to you if you have a zip-loc bag into which to put it. You may well have seven zip-loc bags in your carry-on but no one seems to mind.

In Sydney my mother had given me a few pieces of silver, some serving spoons and a couple of salt spoons. Too valuable to put into checked luggage, so they were in my carry-on. In Fiji they wanted to look in my luggage and seemed a bit uncomfortable about my bringing them on board the plane, but after some pleading liberally sprinkled with "my mother" and "family heirlooms" they agreed that I could keep them in my carry-on, but was advised to pack them in the bottom underneath everything else because there would be another security check before boarding.

Weird, but whatever, right? Turns out that the "security check" was a couple of guys at a table on which you placed your carry-on items, opened up and they'd sort of peek in, no touching really. So yeah, packing questionable items underneath everything really was the way to go.

I watched three movies on the way to LA.

In LA we went to Eggslut for breakfast. I'd totally go back. The eggs were light, fluffy and creamy, the cheese was just the correct amount of melty and the brioche was perfect. 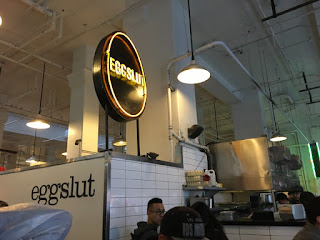 We tried to go to the Contemporary Museum of Art but it's closed on Tuesdays apparently.

We went to The Last Bookstore where the upstairs is all sorts of fabulous although I have to say I'm in two minds about using books as bricks. 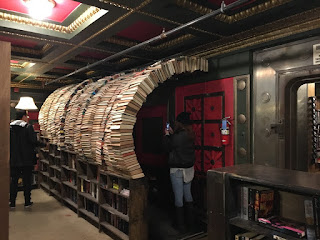 We wandered around the outside of the Walt Disney Concert Hall which is kind of amazing. 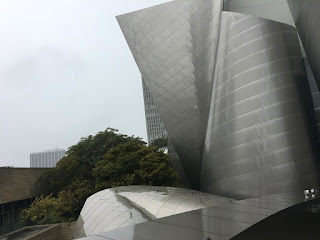 We then ate calamari tacos and kimchi quesadillas and other deliciousness on the way to the airport where my flight was delayed many hours so I didn't get home until four-ish in the morning.

That was not the most fun time ever. Spreading travel home over effectively two days turns out to be less than ideal, even if I get to spend time with my daughter.

The rest of the week was a bit hazy, I'll confess, especially since The Great Flood came and went while I was gone leaving a basement which smelled badly of mildew. After vinegar and a carpet cleaner that itself seems to smell of mildew followed by OdoBan, my house smells of a distant relative of synthetic pine scent. I guess it's better than mildew? Perhaps I'll use more hydrogen peroxide or something. I'm so not in the mood for recarpeting the basement.

I did teach a class on Thursday, I'm not exactly sure how, and I even made a sample for it on Wednesday night when all I wanted to do was be horizontal.

My big project today (after the vigorous exercise that was determining which breaker corresponded to the outlet in question which was tricky because the few existing breaker labels were a bit on the misleading side) was to change the normal outlet for an outlet also containing USB outlets, which was going really well until I tried to push the new outlet into the box only to find it didn't fit. 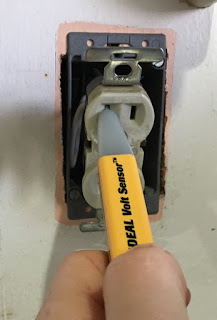 Luckily I was able to replace the original outlet (I'm not always utterly confident about this stuff) and had an adapter that I could plug in. Functionally the same but far less elegant and more bulky. 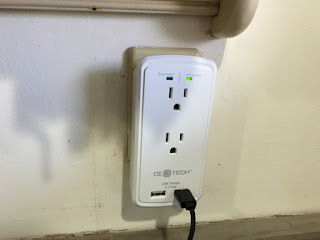