I don't really have all that much to complain about really, but there's been some work-related stress that I think is in the process of being resolved (likely another couple of months to endure), and while the expected resolution is the right thing for me, and for the people with whom I work, and for the software we make (radiation oncology treatment planning), and possibly even for the eye of the storm, it probably won't feel like it for her, and it'll hurt and be life-altering and I'm distressed about that.

It's not my fault (even slightly), but at the same time I feel culpability. I don't like conflict,  I don't like belligerence, I don't like bad-tempered rudeness, I don't like it when people are divided into factions, and I like it even less when I'm not sitting on the sidelines, but an actor in the proceedings.

A friend asked if it was worth pursuing, and all I can say is that I've dealt with bullies, and there comes a point which for whatever reason feels like a watershed moment at which you have to stand your ground, because to turn the other cheek would start on an irreversible path to only weakness, obedience and malleability. There's a moment at which you have to realize that fighting fire with calm just burns you down to the ground.

Stress. It's what's for dinner.

Last Tuesday I taught the second part of a two-parter in which these were made (without the doodads at the bottom end). 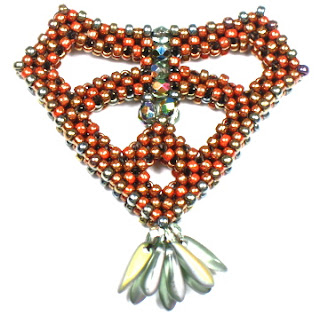 I have to say that I'm quite spoiled on my teaching Tuesdays in that there's a core group of regulars who are very comfortable with each other and even seem to enjoy each other. (I know I do). Even when the projects are involved and there are grumbles and mutterings, there's also laughter and the comfort of doing what we enjoy at the end of a day where we were doing what we must in order to do what we will. 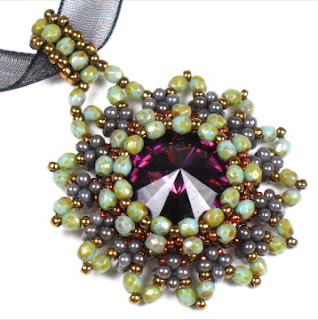 I teach at a bead store, and the deal is that I don't require materials not available in the store, which means (among other things) I have to wait for them to start carrying rivolis in sizes other than twelve and fourteen millimetres   - and now I can start designing for eighteen millimetre rivolis. 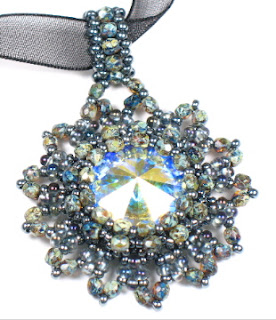 I think I need one with multiple colours of the fire-polished beads.