My monthly eating club at which oh yeah we also spin was due to meet yesterday, and I had foolishly (or perhaps with a subconscious self-knowledge which meant that I had to make good on my big words or die or feel silly or something) bragged that my backpack would be done, so it was.

Assembly was happening without any serious hitches until I got to the straps.

It's not as though I thought I had the rectangle rings: I had searched every store within lunchtime reach of work that might possibly have them, and the best I could find were one-inch rings. Unfortunately the belting I'd bought was one and a half inches wide.

And yet I managed to be surprised and disbelieving (you should have seen how carefully and thoroughly I searched for them) when on Friday night as I sat down to attach the straps, that I was missing some hardware.

As in my childhood home, Under The Stairs in my house is a little mysterious.

As in The Vagina Monologues, it's a place I don't go terribly often. It's deep, dark and musty back there. 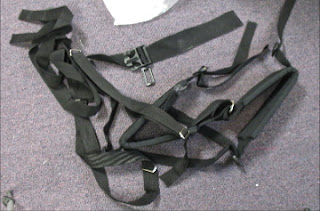 There was a treasure trove of dead bags and a backpack which I thought I'd swapped for a pair of amethyst and silver earrings but then recalled that it was in fact the sleeping bag that I'd swapped, and that the alpaca sweater was a gift.

Naturally, there was cannibalization of dead travel containers with the added benefit of clearing out stuff. 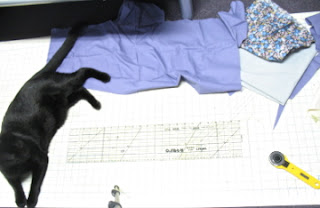 There was also an unexpected scrap fabric stash which turned out to be useful. 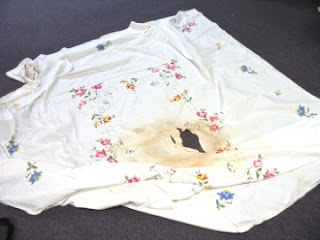 The dead tablecloth I'd thought might be useful for pockets and linings was just too stained, and besides, any unstained areas would be far more useful as clothing and anyway a white lining is ridiculously impractical because it would take about seventeen point nine seconds of actual use for it to start looking grubby and gross. 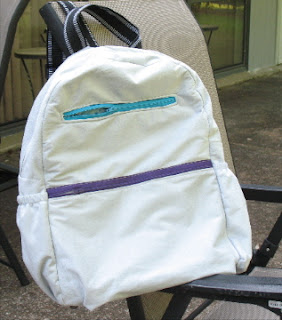 The backpack had its first trial run yesterday. 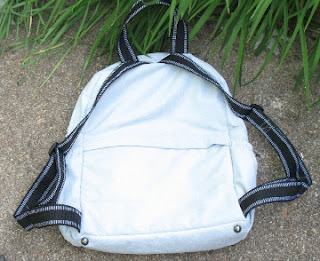 Some people were offended that I had used bought belting for my straps since among my fibre friends there's a wealth of band-making expertise, mostly concentrated in John, although others (including myself) are perfectly capable, but time was a pretty limiting factor since my trip is imminent and I needed straps the day before yesterday.

The stripe across the back above is the hidden iPad pocket which was the motivation for making this in the first place (it's too heavy and insecure to carry on one shoulder all day long). It's a somewhat snug fit, so I might leave the cover at home since the backpack is fairly well padded. 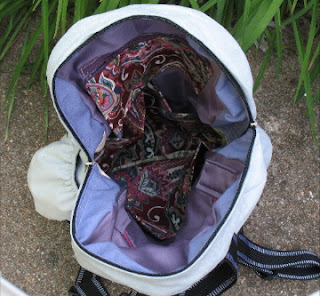 There is a fat pocket on each outside gusset: one for a water bottle, the other for the umbrella (I hear Prague is rainy this time of year).

On the inside, both front and back have a pocket across the full width, the front pocket being divided into two. Both inside front and back also have a small zippered pocket nearer the top.

Almost every pocket, inside and out, has a different lining. The beauty of scraps too big to toss and too small to use for clothing, which is the bulk of what I used to sew when I was making ninety percent of my clothes.

I'm pretty sure there are some How On Earth Could You Have Forgotten That pockets that I have in fact forgotten or didn't think of, but overall I'm quite pleased with it and believe it should serve its purpose.