Painting has been done (but the yellowish is a little greener in real life. I'm only so good with the iPhoto adjustments, which have saved my arse more than once, but which cannot do the purse from a sow's ear thing which my photography skills require). 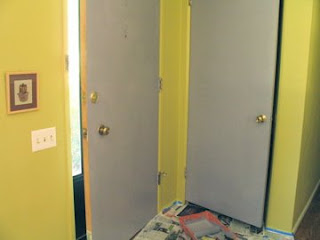 The little picture on the wall? This gorgeous piece of embroidery was made by Ethiopian women in Israel.
When the Ethiopian Jews were discovered and brought to Israel - what was it? Fifteen or twenty years ago - integrating them into Israeli society was a challenge for all involved, not least of which was to figure out what marketable skills they had that could earn their living. Turned out that they did this wonderful embroidery (chain stitch only, as far as I've been able to determine, with a preference for bright colours, resulting in a style somewhat analogous to the mola), so they were formed into an organization which embroidered Judaica, such as matzah covers, mezuzot, hamsas (such as the one on my wall: it's a hand warding off the evil eye. My grandmother preferred to spit three times), challah covers and on and on and on.
Yeah, baby, yeah. 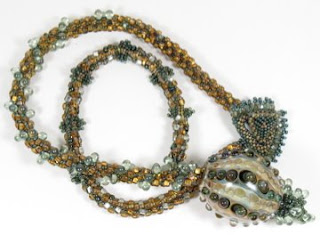 Well, I'm pretty happy with this, so crow I shall.
I always forget, until after the fact, that if I make a necklace that is long enough for the pendant to hang spang in my cleavage then I probably don't need a working clasp. My head's not that big, after all, and thanks to gravity and collagen depletion over time (or whatever it is that ages flesh), these necklaces will be able to become so long in years to come that should I ever buy into another Big Hair trend, and should the companies that make hair products move into the miracle business, since the nature of my hair precludes this style of coif, being soft, limp and insecure (it would rather cling to my head than exhibit any sort of independence), then I'll be safe if I forget to slip on a long claspless necklace until after my hair is done, since it's big enough to not disturb any sort of Pilobolus-inspired hair arrangement.
Now isn't this lovely? 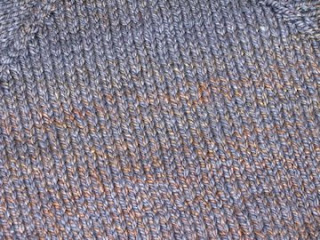 The colour, the shine, the spinning, the knitting? Perfection?
Not so much. 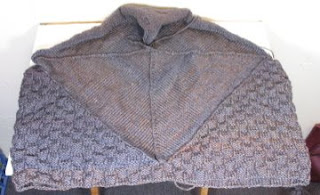 As the beginnings of a sweater, it's just plain funny-looking, and not super-cool as I'd intended.
Ugh. Guess I'll be ripping this one too, but I have an even cooler idea for its next incarnation involving short-rows.
Stay tuned.
Posted by Charlene at 9/01/2008 09:37:00 AM