I prefer to think of elements of my stash as ripening, rather than ageing (the notion of growing older has long since lost its glamour; in fact, I'm not utterly delighted with the concept as it applies to myself) and a handspun two-ply which actually turned out the colour I intended to dye it had screamed to the front of the ME!ME!ME! queue, demanding to be knit into a cardigan. Or jacket.  A garment for the upper half to be worn over other garments, but not a shawl because I turn into my worst whine (Am I there yet? Am I there yet?) when I attempt shawls or scarves, and probably (though I will not test this) ruanas and other wraps, not to mention afghans.
At the same time, the siren call of this (but with long sleeves) was strong in my heart.
I'm not always as bright as I like to think I am; alternately I have a short memory; alternately I am learned in the ways of self-delusion, because I actually did learn earlier this year that cardigans with cut-away bottoms make me look shorter and wider and squattier than I am, which isn't my most favourite look.  Nevertheless, I started knitting: 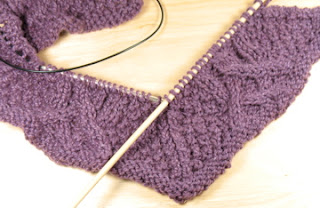 A little wiggly at the edges, start again: 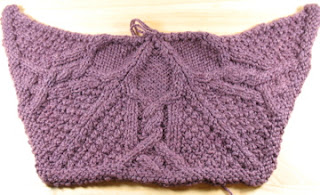 Much better.
Oh.
Yeah, it's going to make me look like a cabled storage bin. Dammit.  I guess I could turn it upside-down and use it for the yoke of a raglan sweater, but I really wanted a cardigan.
I surfed and sketched and paged through the not insubstantial collection of books and magazines and sketches, and eventually decided on something approximating this.
Not as cropped, but still asymmetric, and it's looking good so far: 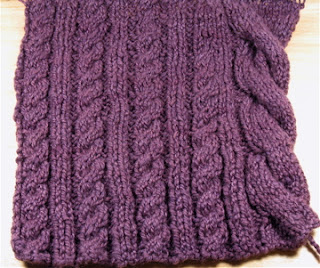 The colour on my monitor is pretty close to The Real Deal, and while the yarn isn't as sleek (or as drapey) as that called for in the pattern, I think it will still work.  My gauge is way different, and I'm not a big fan of knitting separate pieces and then sewing them together when the seams serve no useful purpose, and their sleeve shaping (or lack of it) isn't that conducive to upper arms with even a small amount of musculature, but I'll knit the set-in sleeves top-down anyway, so that's mostly moot.
The yarn is a wool (merino x border leicester from Cindy Genteman, I think her business is called Loom With A View, and she has lovely and interesting fleeces) and silk blend which is a two-ply only because as singles, it was thinner than I wanted, and I had enough fiber for two sweaters.  I'm pretty sure I saw a picture of the other sweater (which was indeed made form singles yarn) on someone else's blog (it was in the SOAR gallery), and I don't have a photo, but it's based on a Norah Gaughan (I think she's a genius, I just adore her sense of clever design) sweater from her lovely Knitting Nature book.
The interesting thing to me about the two-ply versus the singles yarns is that they're so very different.  The fiber blend, due both to the wool breed as well as the smallish amount of silk, is naturally lustrous, but the singles glows with a sensuous smoothness, whereas this two-ply seems to highlight each ply in an almost rustic way.  It's not uneven, it's not bumpy, but it seems rather textured, and it's another reminder of why I prefer three-ply yarns, especially when the fiber isn't super-crimpy and lofty.  A merino or polwarth or polypay or cormo (you get the gist; there are other highly crimped fleeces I could name.  Truly) two-ply spun with a similar amount of twist to the same grist would fill out the cross-section better than this fiber, and result in a rounder yarn than this.
What I've been really busy with is wracking my brains to develop designs for the next crop of classes at my local bead store.  Yesterday was the deadline, so now those artfully photographed partially finished pieces will have to be finished For Real, as the samples will be in a display case in the store along with everyone else's, and ideally should look minimally attractive, not to mention complete. 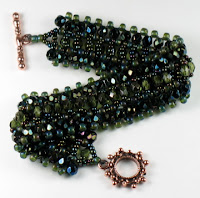 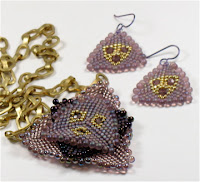 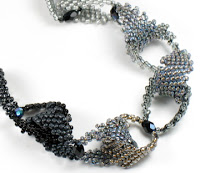 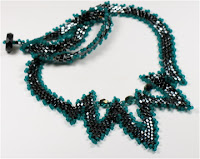 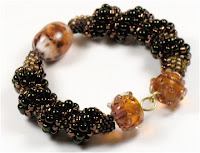 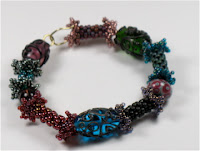 Happy New Year to you! Thank you for such beautiful eye candy - the sweater is going to look fabulous.

Thanks - and a Happy New Year to you and Pete too! I do hope to see the two of you this year. Unless something unexpected goes horribly wrong, I'll bring the sweater to SOAR.

I yearn for that sweater. Left to my druthers my entire wardrobe would be black tights, black boots or flats, black dresses or skirts and Ts of varying lengths, dangly earrings of the silver and semiprecious gemstone variety, ditto the occasional necklace or bracelet, assorted Wilma Flintstone scale rings etc, topped with a variety of interesting cardigans, shawls and wraps. Materials and level of formality dictated by occasion.
Jeans and pullovers or jeans and Ts for those occasions that need leg covering. Colorful dresses in the summer.
A friend told me that that sweater would be unkind to my bust. But I'm still thinking about it.

Also, I think I need to go clean out my closet.
Happy New Year.

I figured out how unkind these cutaway cardigans are after perusing garnstudio.com and searching for ladies' cardigans. There are a bunch that are of the Large Circles With Sleeves variety, which work fine when they're oversized and drapey, but the minute they're fitted and just meet at the waist, they make the anorexic beanpoles look, well, not their best. AND they're artistically (or something) posed AND they're professionally put together and they look awful! My false start cardigan is photographed from an unnatural perspective on someone related to Elrond, and while the garment undoubtedly is gorgeous, if you look carefully, you can see it's just not that flattering.

I'm starting off the new year with a nasty cold. I ate Zicam ever three hours yesterday and all it seemed to do was to accelerate the progression, so I've already watched two hours of TV today WHILE NOT KNITTING, so you know I feel lousy.

Hope yours is much better.

cheers Charlene..I've something "sluggy" on the needles right now, and it makes me think of you often, happy achoo year. feel better soon. love your dennyx0x0xx0

Hey Denny, I was just thinking of you because I wrapped myself in your shawl in an attempt to get over this stupid cold and feel better. I think it's working too.