I may still be in sweater limbo (I've done a project's worth of rippage, but I think I have a plan. This wouldn't be the first time you've heard that, but I am the eternal optimist and ultimate gadfly when it comes to knitting projects.  It's just that I have more ideas than time and hands), but now I know that if I take this: 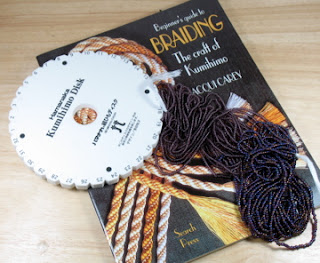 I can get this: 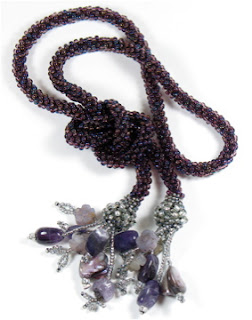 Even though I was in the middle of this: 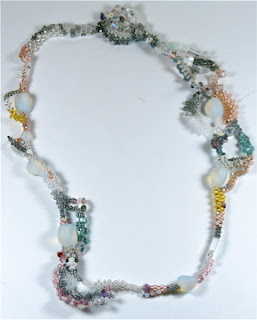 Can you say "Short Attention Spa-" hey! Shiny things!
I've done bead crochet, and I can do bead crochet, and I do love the finished product as the ropes are wonderfully supple, but man is it slow.
First there's the whole figuring out the stringing order if you want a pattern. Miles and miles of it.
Then if you - gasp! - make a stringing error, you only ever discover it after three painstaking inches and fifteen painstaking hours, and the only way to correct it is to break the beads that make the pattern wrong without shredding the thread on which they sit.  No big deal if they're seed beads, but one might be less sanguine about it if they were crystals (some are expensive) or pearls (I have no idea how you'd break them without shredding the thread) or even a gemstone.
OK, I lied, you could conceivably end off the bead crochet, cut the thread, remove the offending beads, and rejoin and start again, but I'm against joins (in knitting or beading) if they're avoidable, because they're certainly one of (a) a weak spot, (b) a stiffening or fat spot where the extra thread tails add bulk, or (c) a source of irregularity and untidiness just because it's often hard to join neatly.  Some techniques just don't lend themselves well to joins.
When I do bead crochet, I have a hard time getting optimal tension, which also makes it slow. Too loose, and the beads pop into the centre of the tube, where you can't see them, and what's the point of that.  Too tight, and the crochet hook, which is already smaller than these eyes like, finds it awfully difficult to find spaces in which to poke, let alone pull through a loop.
I've made about three bead crocheted things, and one was even a long lariat, and I even like it, but every time I think about starting another bead crochet project, I find something else I'd rather do.  I bet the same would happen if I tried to work from home.
Kumihimo with beads has few of these issues.
While I admit to having made ONE SINGLE kumihimo rope which actually has two colours in a spiral which you can't see since they're so similar but which I've convinced myself all the same adds interest, depth, richness and complexity to the overall colour, I do have access to a book which shows patterning in colour as well as texture, so while the words "expert" and "kumihimo" could not be used in the same sentence when talking about me, I do have a little information.
The best part? The patterning is achieved by varying a thread, or in the case of beads, a strand of beads.  This means that if I use Czech seeds, which conveniently may be purchased in hanks which means that the beads are already strung, it's a simple matter to transfer the beads onto the thread to be used in the kumihimo rope.  Change the colour to change the patterning; change the size to change the texture.  Of a strand.
How awesome is that?
True, I suspect the complex patterning that can be achieved in bead crochet may be awkward if not impossible in kumihimo, but if I decide that I absolutely have to have a supple beaded rope in ocelot spots, I can either bite the bullet and do bead crochet, or get a grip and find something I'd rather have instead.
Oh and the other best part? It's fast.  I made twenty-seven inches of rope, including McGuyvering weights and bobbins (I gave away all my knitting bobbins; I prefer intarsia without), stringing, undoing, reading the instructions properly this time, and starting again with a clue, in about six hours.  I think that's pretty fast.  It would have taken me a few weeks to do this in bead crochet, and I don't know of any off-loom beadweaving technique that can produce such a fabulously supple rope.
Can you tell I'm pleased with myself?
Posted by Charlene at 12/23/2007 09:54:00 AM

so how did you finish off those ends under the blobbly bits (crystals?) before the fringe?

Then I worked in sort-of herringbone stitch around the first round of beads (turns out that even though it's an 8-strand braid, you can only find about 7 beads on the end. So each stitch added three silvery seeds, the first and last oriented themselves with holes parallel to the rope, the middle had their holes perpendicular. I then went around backwards again to add beads between the herringbone stitches.

In this way I was left with seven beads around the rope with holes perpendicular to the direction of the rope, so I could start working in peyote.

So, in answer to your actual question: I tied an overhand knot sealed with glue.

Ergh, sorry for the misspellings and typos, I really should preview before I post...